Following a one-week break in the publication of this letter due to the author’s summer vacation, here we are again at the beginning of August under much less gloomy skies than our last publication. While the macroeconomic issues that drive the markets as a whole have obviously not completely changed in the space of two weeks, it is clear that investors are beginning to believe in the interventionist success of central banks in their ability to slow the economy to curb inflation. Such a slowdown is actually welcome and gives confidence for positioning for the next cycle.

Indeed, while it is true that the U.S. economy is technically now in recession following the release of gross domestic product (GDP) data that showed a decline in growth for a second consecutive quarter, it cannot be said that the economy is in crisis, at least for now. U.S. employers added 372,000 jobs in June, suggesting that there is still plenty of capital in the economy for expanding businesses. Janet Yellen, U.S. Treasury Secretary, said that in past recessions, the labor market lost a significant number of jobs, which is not the case now. She said that while the economy is experiencing a “significant slowdown in growth,” there are also “great forces” to consider.

Immediately after our last communication, we learned that Tesla had sold 75% of its cash in bitcoins. If the announcement of this investment had once made prices explode, the news of the sale brought little effect. Despite a temporary dip, bitcoin found its share of buyers at the same levels as in recent weeks and quickly stabilized. We will not grieve over the increasingly muted effects of Musk’s comments on the cryptocurrency market.

Two weeks ago, we told you about the importance of the 200-week moving average (red line in graph below) for bitcoin and how closing above it after breaking through to the downside had always led to a subsequent bullish period. We thought we were on the verge of it then, but that second to last week of July ended up closing just below that indicator. However, the week that ended on Sunday managed to close north of this line, giving hope that it will now serve as a strong support for a continuation of the current bounce. We can also see that the way seems open for a bullish push up to about $26,500 where the 200-week EMA is located (yellow line in graph below). 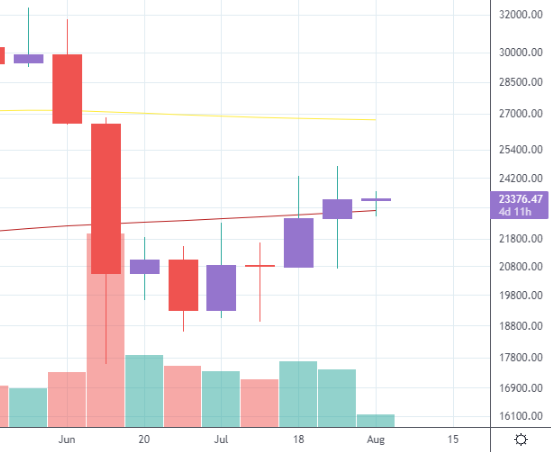 We also note that July was the best month of 2022 for bitcoin. The same was true for Ether, with higher returns for the latter.

As of next Monday, Michael Saylor will no longer be CEO of MicroStrategy. The firm, which recorded a heavy loss on its balance sheet in Q2 with its bitcoin treasury, will now entrust this role to the company’s current president, Phong Le. Don’t think this is a departure from the company for Saylor, however. Instead, the latter says he welcomes this transition to his future position as executive director, which will allow him to devote even more time to bitcoin and the company’s crypto cash flow. “I will remain an executive officer of the company and chairman of the Board of Directors, as well as assuming the chair of investments committee and leading our bitcoin acquisition strategy,” Saylor said on the company’s 2022 Q2 earnings call Tuesday. “My focus is bitcoin advocacy and education, like with the Bitcoin Mining Council, and being spokesperson and envoy to global bitcoin community.”

This is not unlike recent comments by Jack Dorsey, co-founder of Twitter and Square, who admits to making bitcoin adoption his top priority. “Bitcoin is changing absolutely everything. I don’t think there’s anything more important in my lifetime to work on,” he said recently.

Why not take the opportunity to remind everyone of the resilience of the blockchain, bitcoin being the monetary network with the highest and most constant up-time. It is its decentralization that explains this when compared to centralized payment systems. It has been calculated that the network has had an up-time of 99.987% in its history. The last downtime was 6.5 hours, 3423 days ago, which is about 9.3 years ago. In short, it’s been almost 10 years since bitcoin made it possible to trade anywhere in the world, without any intermediaries, at very low costs, without any downtime. There is no financial system in the world that comes close to such a feat. This is another demonstration of the revolution that blockchain brings.

Speaking of blockchain, the Ethereum network is truly approaching a crucial turning point in its existence. The final merge of the Ethereum Testnet is scheduled for early August. “Goerli” will be the network’s third and final testnet before the chain’s transition to proof of stake, which is scheduled for mid-September.  Between August 6 and 12, the Goerli test network is expected to merge with Prater, its associated beacon chain. The main Beacon Chain is the proof-of-stake version of Ethereum that has been running alongside the current proof-of-work Ethereum network since December 2020. The last two such tests were successful.

Recall that blockchain 2.0 eliminates the need for miners. Instead, validators, who can be anyone as long as they pledge at least 32 ETH or join a common pool of validators, will provide network security by locking the network’s cryptocurrency. Ethereum’s energy efficiency will be improved by about 99 percent, according to the Ethereum Foundation. The bottom line, and what some investors and analysts are currently so optimistic about, is that this transition has intrinsic reasons to lead to a consequential price increase. Indeed, by requiring that ETH currently in circulation be locked up in order to issue new ETH, the process could have a deflationary effect on the cryptocurrency. If the growth in ETH supply can be slowed while demand for the crypto remains high, this may have a positive impact on its price. At least that’s the opinion of speculators who are filling up on Ether and taking advantage of its outperformance against bitcoin. This is also the case for the Rivemont Crypto Fund.

As proof of the craze, domain registrations for the Ethereum Name Service are reaching a record level as the merger approaches. More than 1.8 million ENS domain names have been registered, and adoption by non-English speaking communities is on the rise.

Is this migration an endgame for the network? Ethereum creator Vitalik Buterin reminds us that this is far from being the case. The merger is only a step of development bringing the network to 55% completion, he said in an Ethereum conference in France in late July. After the merge, Ethereum will undergo other upgrades that he calls “surge”, “verge”, “purge” and “splurge”. While the names may sound cartoonish, these steps are actually key elements of Ethereum’s scaling, cleansing and evolution, Buterin said.

The “verge” will implement what Buterin calls “Verkle trees,” which represents a type of mathematical proof. These technical improvements will allow users to become network validators without having to store large amounts of data on their machines. According to Buterin, it is this step that will allow true decentralization.

The “purge” will simply seek to reduce the amount of space you need to have on your hard drive, trying to simplify the Ethereum protocol over time and not requiring nodes to store their history.

The “splurge” finally? A much less technical step. “All the other fun stuff,” Buterin explains with a laugh. In short, everything the network will allow, including things that may not even have been thought of yet.

The fund’s capital has been fully exposed throughout the past few weeks. Our positions in ETH, MATIC, and UNI have helped to outperform bitcoin for the period. Note that the fund also has a position in SAND which has been relatively stable since our entry.

The presented information is as of August 3rd, 2022, unless otherwise indicated and is provided for information purposes only. The information comes from sources that we believe are reliable, but not guaranteed. This statement does not provide financial, legal or tax advice. Rivemont Investments are not responsible for any errors or omissions in the information or for any loss or damage suffered.

The last six days can really be divided into two phases. At the end of last week, which coincided with the end of the third quarter of the year, the price of bitcoin really fought against all odds to stay in its consolidation channel, with the US stock market indexes swimming at 2022 lows.