Only one week left until our free happy hour at the Bonaventure Hotel in Montreal on Thursday April 14th. The Rivemont crypto strategy team is eager to meet you and answer all your questions. Also on the agenda is a conference named “Les cryptomonnaies; une révolution digitale”. Are you curious about the nature of cryptocurrencies and wonder why they have value? Are you thinking about investing in them, but don’t know where to start, or if investing in them suits your profile? This conference is tailor-made for you! Food and beverages will be served. It’s free, but you need to reserve your ticket. They go fast, so don’t wait! Click here to reserve your ticket.

As this paper returns from a week-long publishing hiatus, it’s north of $2 trillion in total capitalization that the cryptocurrency market finds itself again. The fund benefited from the rise, actually outperforming the bitcoin index for the period thanks to a heavy exposure to ether. There was plenty of news of interest during those same weeks. Let’s take a look at what caught our eye.

A surprise in the markets this week as Elon Musk announced that he had acquired a 9.2% stake in Twitter and in the process gained a seat on the Board of Directors. Musk has always been vocal on hot web topics, including both censorship and cryptocurrencies. So what consequences could such an acquisition have? Besides a short-term rebound in Dogecoin – Musk’s pet token (no pun intended) – the influence of the world’s richest man could accelerate the adoption of cryptos on the social platform. As Ken Li, chief investment officer at Binance Labs, mentions, “Elon has always been very public about the concept of a more decentralized and censorship-resistant social media platform, and this is something that blockchain and Web3 technology can help enable.”

The European Parliament voted last week in favor of new regulatory measures that would essentially ban anonymous cryptocurrency transactions. The plan aims to impose KYC on all private cryptocurrency wallets, as well as make it illegal to trade anonymously for more than €1,000 from “non-hosted” wallets. These wallets refer to personal ownership of them, not using third party involvement like an exchange. We are talking about wallets such as MetaMask, or in hardware version, Ledger or Trezor. If you send such an amount from one wallet to another, the project would require you to report this transaction to the authorities.

Needless to say, this measure goes against the very spirit of cryptocurrencies and has been decried by the majority of players in the industry. One of the most vocal to this effect was Brian Armstrong, CEO of Coinbase. He called the proposal “anti-innovation, anti-privacy, and anti-law enforcement”. Under this proposal, crypto transactions are suddenly under more scrutiny than traditional monetary ones. “Imagine if the EU required your bank to report you to the authorities every time you paid your rent, just because the transaction was over €1,000,” he argued. He added that this puts companies like his in an impossible position. “This means before you can send or receive crypto from a self-hosted wallet, Coinbase will be required to collect, store, and verify information on the other party, which is a not our customer, before the transfer is allowed. Moreover, any time you receive 1,000 euros or more in crypto from a self-hosted wallet, Coinbase will be required to report you to the authorities. This applies even if there is no indication of suspicious activity.”

In order for the legislation to be officially adopted, it must first go through tripartite meetings between the European Parliament, the European Commission and the European Council. However, the project is not expected to die there – quite the contrary.

In parallel, the UK continues to try to position itself as a breeding ground for the development of digital currencies. This week, UK Finance Minister Rishi Sunak asked the Royal Mint to create a non-fungible token to be issued by the summer, adding that this was part of its forward-looking approach to cryptoassets.

This letter purposely stays away from any political opinion, only mentioning it when it influences the cryptocurrency industry itself. On our side of the Atlantic, it’s worth noting that Conservative Party of Canada leadership candidate Pierre Poilievre has been advocating for digital currencies in Canada. After paying for his lunch in bitcoin last week as part of his grassroots campaign, he officially spoke out over the weekend. “Give people back control of their money. Keep crypto legal and let it thrive,” said Poilievre on Twitter, where he also promised to help Canadians to “take back control of your money from politicians and bankers.” He added that he wants to make Canada the blockchain capital of the world.

It must be said that Canadians’ confidence in digital currencies is steadily increasing. While cryptocurrency outflows from exchanges are at record levels, again, so is the inflow of funds to Canadian bitcoin ETFs. These funds have increased their holdings by 6,594 BTC since January to an all-time high of 69,052 BTC held. As noted by analytics firm Glassnode, “It is quite impressive to observe such strong outflows from exchanges (spot holdings), as well as inflows into both ETF products, DeFi applications, and on-chain accumulation wallets, despite the numerous macroeconomic and geopolitical headwinds of recent months.” In short, the accumulation process is clearly continuing, and against all current market odds.

Speaking of accumulation, who else but Michael Saylor and MicroStrategy to add to its ever-growing share of the pie. The firm announced yesterday that it acquired an additional 4,197 BTC between February 15th and the time of publication. The purchase was made at an average price of $45,714 / piece. As a result, MicroStrategy and its subsidiaries now hold a total of 129,218 BTC, for a total purchase price of $3.97 billion and an average purchase price of $30,700 per BTC.

Only fools don’t change their minds? Jamie Dimon, CEO of investment banking giant JPMorgan, praised blockchain technology and decentralized finance (DeFi) in a letter to shareholders released Monday. “Decentralized finance and blockchain are real, new technologies that can be deployed in both public and private fashion, permissioned or not,” Dimon said, before adding that JPMorgan is “at the forefront” of these innovations. Surprising words from the man who once bluntly called cryptocurrencies a fraud, and then went further last October saying that bitcoin was worthless.

In other news, Intel officially launched its Intel Blockscale ASIC on Monday, which is specifically designed for cryptocurrency mining. The latter offers a high hash rate for a lower power consumption and is therefore more environmentally friendly. The SEC, unsurprisingly, rejected the ETF project of Ark Invest and 21 Shares. The CME Group, which already offers futures contracts on Bitcoin and Ether, now says it is exploring the possibility of doing the same with Solana (SOL) and Cardano (ADA) tokens.

On the more technical side, just as bitcoin miners helped put the 19 millionth BTC into circulation on Friday, the BTC network’s mining difficulty returned the favor by hitting its own record high. Bitcoin’s network difficulty is correlated to the computing power required to mine BTC blocks, which currently requires an estimated hash rate of 201.84 exahash per second (EH/s). 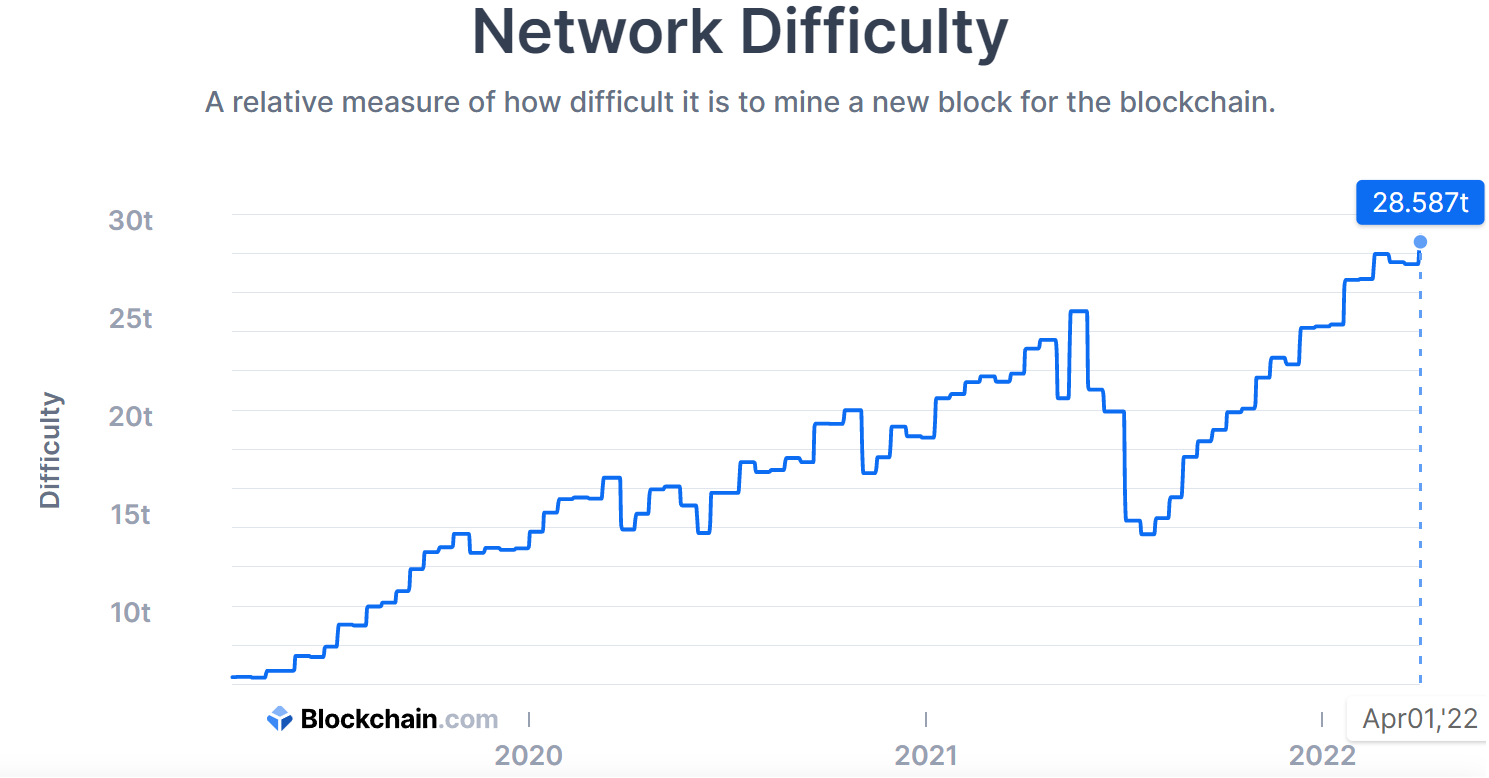 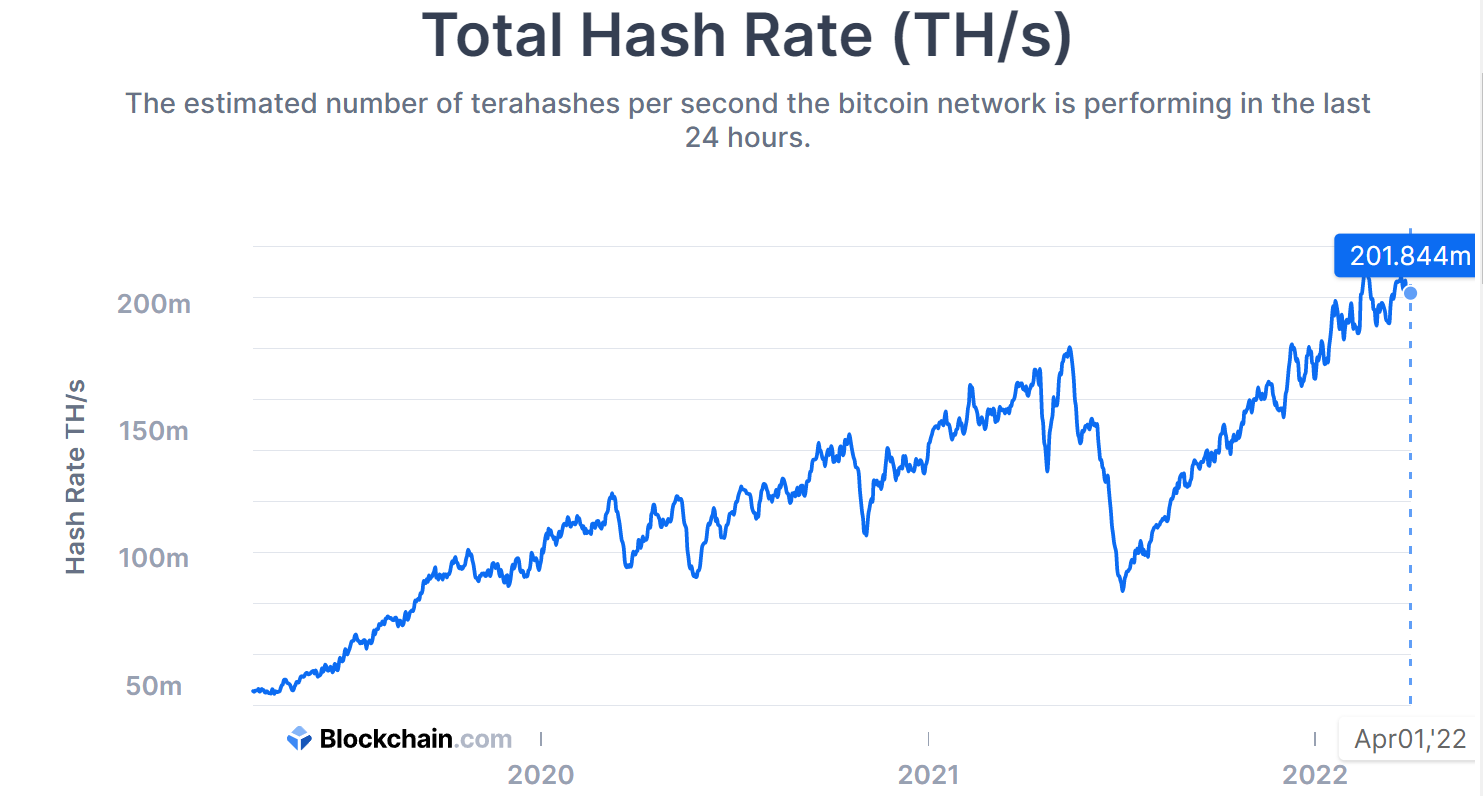 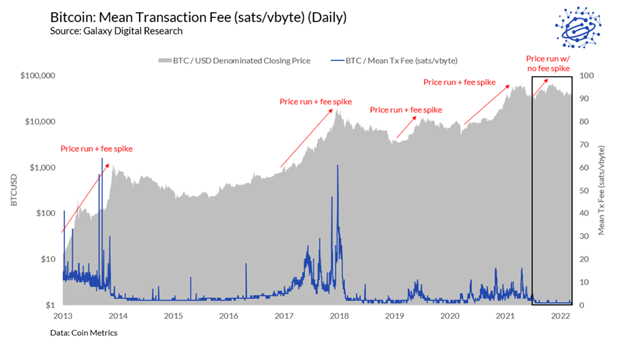 According to Alex Thorn, head of research at Galaxy Digital, the combination of increasing adoption of Segwit, transaction batching, the growth of the Lightning network and the collapse of miner sales are all factors in this dynamic. More interestingly, the analyst notes that the fall bitcoin price increase was the first in history not accompanied by a parallel increase in transaction fees, proving that the technology solutions being implemented are working.

While there is no doubt about the overall health of the industry, in the short term, the same themes are undoubtedly influencing the markets. Particularly clear comments highlighting an inflation-fighting urgency by the U.S. Fed over the past couple of days are causing bearish pressure on the stock market, dragging cryptocurrencies along with it. Bitcoin appears to be in a clear consolidation channel between $43,000 and $48,000, where the 200-day moving average is located. Nonetheless, after the drop in the first few weeks of January, bitcoin has been painting a bullish accumulation picture since hitting $34,000 with a series of higher and higher lows.

The presented information is as of April 6th, 2022, unless otherwise indicated and is provided for information purposes only. The information comes from sources that we believe are reliable, but not guaranteed. This statement does not provide financial, legal or tax advice. Rivemont Investments are not responsible for any errors or omissions in the information or for any loss or damage suffered.