No, you didn’t sleep a whole day to wake up Wednesday morning. This communication is exceptionally published this Tuesday, as the editorial staff will be away on business tomorrow.

News from the firm before diving into the crypto news. Note that Rivemont has just moved its Montreal office to 19 Le Royer Street West, Suite 300, still in Old Montreal. Don’t hesitate to come and visit our beautiful new offices!

The last six days can really be divided into two phases. At the end of last week, which coincided with the end of the third quarter of the year, the price of bitcoin really fought against all odds to stay in its consolidation channel, with the US stock market indexes swimming at 2022 lows. As for the new quarter, it is starting off as a lion on the US stock exchanges, with the cryptocurrency market also climbing in the process. It may not have the vigor of the stock market rebound, however, at least for now. Let’s just whisper it, but the price of bitcoin has been acting more like gold in recent weeks. The question is definitely: Is the correlation with the stock market breaking down? 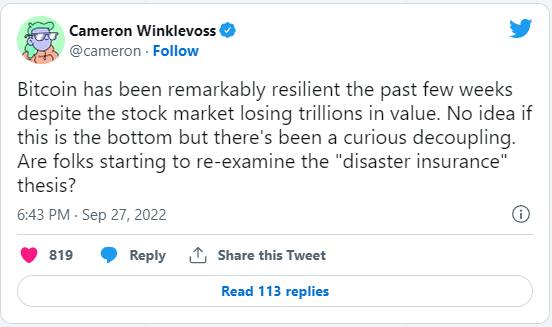 According to the correlation matrix produced by intotheblock, the latter is still alive and well, although it has declined slightly in recent weeks. 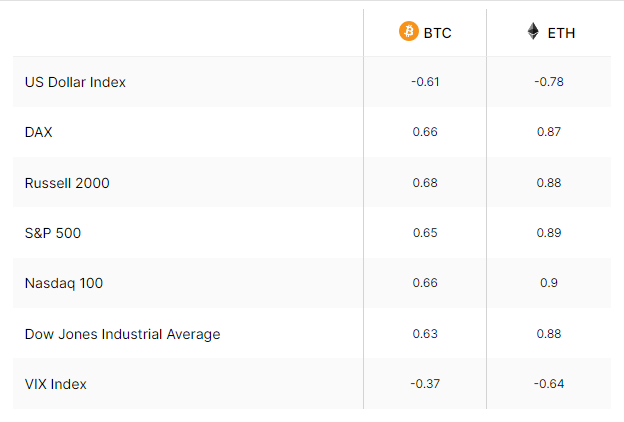 “Correlations with equities have indeed declined in recent weeks, but are still quite high,” said Lucas Outumuro, director of research at the same analytic firm. The latter believes it is still too early to think about this correlation fading, saying that it could instead strengthen again, citing “risks of reduced liquidity due to interest rate hikes and [quantitative easing] continue to put pressure on risk assets, including crypto.”

“The correlation between BTC and the S&P500 has been at all-time highs since March 2022, as both markets have been affected by the actions of the Fed and other macroeconomic events,” meanwhile, says Nate Maddrey, director at Coin Metrics Research. “Historically, BTC has not been highly correlated with the stock market, so it is always possible that the tides will start to turn toward a lower correlation. But at this point, the data doesn’t show a significant detachment.”

Not a week goes by without new information surrounding the saga of crypto lending firm Celsius being revealed. According to the Financial Times, former Celsius CEO Alex Mashinsky allegedly withdrew $10 million from the company’s account in May, just weeks before the defunct firm froze customer withdrawals. Prior to this large withdrawal, Mashinsky reportedly withdrew small amounts of cryptocurrencies to pay his taxes. The firm’s remaining assets will be auctioned off soon, by the way. The timeline for the sale of Celsius’ assets was revealed according to a filing from the U.S. Bankruptcy Court for the Southern District of New York. The deadline for filing bids is Oct. 17, and if necessary, an auction will be held on Oct. 20, 2022. The filing indicates that the court anticipates a large number of expected participants. While nothing has been formalized to that effect yet, FTX CEO Sam Bankman-Fried is expected to be among the most active at the auction.

According to a report from CNBC, payments giant MasterCard is launching Crypto Secure today, a new software program designed to help banks and other card issuers identify and block suspicious transactions from cryptocurrency exchanges. A similar system is already in place for MasterCard’s fiat currency transactions, with the technology now extending to bitcoin and other major cryptocurrencies.

After rising sharply throughout the year, the U.S. dollar strength index is down a few percentage points in recent days. Along with a stock market rebound, the stage seems set for bitcoin to now move back north of $20,000. For the move to have sufficient traction and continue up to resistance at 22k-23k, the 50-day moving average will need to be crossed cleanly and with volume. 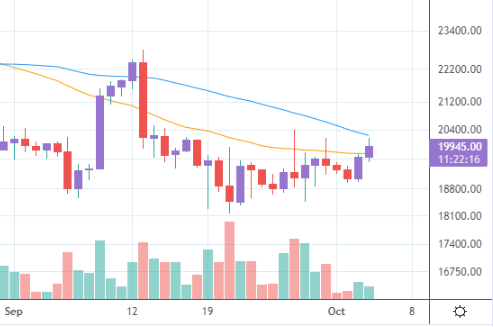 On-chain data shows that whales, those entities with at least 1,000 BTC, have pulled their assets out of exchanges at a level not seen in four years. This is often a bullish sign, as they place their cryptos in long-term holding mode rather than ready to be traded.

Finally, it’s worth noting that the bitcoin dominance index is also trying to break through its resistance level set during the month after slipping below 40% in late summer. Should it does, the chances of BTC leading the rebound are even greater. 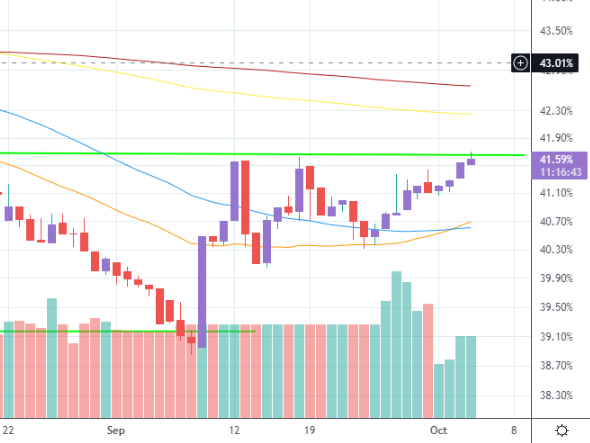 As a result, the fund is currently fully invested in BTC.

The presented information is as of October 4th, 2022, unless otherwise indicated and is provided for information purposes only. The information comes from sources that we believe are reliable, but not guaranteed. This statement does not provide financial, legal or tax advice. Rivemont Investments are not responsible for any errors or omissions in the information or for any loss or damage suffered.

The domino effect following the bankruptcy of crypto giant FTX was the theme of our most recent communication. Another one of those pieces fell apart this week, with crypto lender BlockFi announcing it would file for bankruptcy.

“Never in my career have I seen such a complete failure of corporate controls and such a complete absence of trustworthy financial information as it occurred here”. These are weighty words shared by FTX’s new CEO, restructuring expert John J. Ray III, he who held the same role in the Enron saga in 2001.