First, in terms of price, we see that any drop below $19,000 is currently being quickly bought, regardless of what the stock market indexes are doing; the Nasdaq in particular. This price action means that while these same U.S. exchanges are now trading at their lowest levels for the year, bitcoin remains within its current consolidation channel. This is doubly encouraging when you consider the DXY index, measuring the strength of the US dollar. The latter is currently exploding, reaching record levels dating back to 2002. Remember that bitcoin is seen by many, including us, as a hedge against the possible weakness of the dollar, or national currencies in general at least. 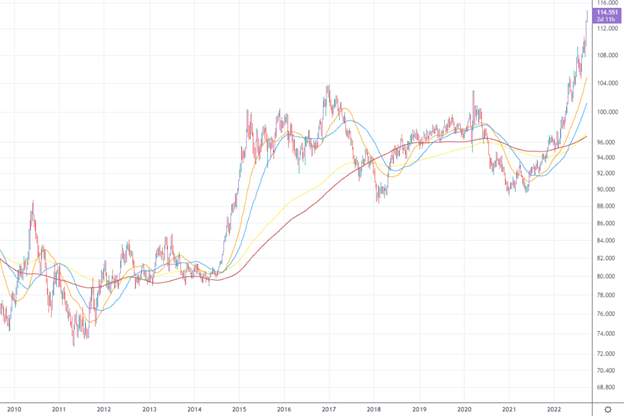 As a result, bitcoin’s chart against the British pound, the euro, the Chinese yuan and even the Canadian dollar is much more encouraging than against the US dollar at the moment.

What accounts for bitcoin’s recent relative strength, when only recently we saw the opposite trend? The lack of sellers at this price level. “I think what we’re seeing is more a lack of large sellers, rather than a plethora of large buyers,” Mike Alfred, a value investor and founder of digital assets investment platform Eaglebrook Advisors, said. “There are no large sellers left. Forced selling has already occurred.” Blockchain analytics firm Glassnode agrees, saying bitcoin’s relative stability stems from the “full detoxification of speculative interest” and the unwillingness of long-term investors to give in and sell in a weak macroeconomic environment. “The dominance of mature spent tokens has collapsed from an exuberant 8% at the peak of the bull market in January 2021, to a distribution of just 0.4% of all volume,” the firm’s analysts wrote in the latest edition of the company’s weekly newsletter. “This suggests that the cohort of investors owning older coins remains steadfast, refusing to spend and exit their positions on a meaningful scale.”

The data doesn’t lie to that effect. While the price has fallen by more than 50% in the past six months, more than three out of four bitcoins have remained safely tucked away in holders’ wallets, with no observed movement. 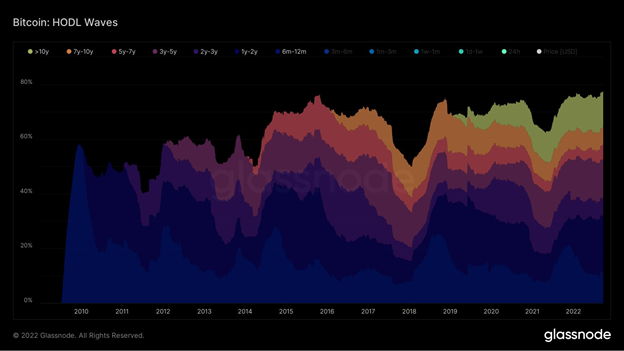 As for Ethereum, the network is now operating exactly as expected on its proof-of-stake consensus mode. The price has stabilized after a “sell the news” fall. However, let’s remember that the issuance of new tokens has recorded a sharp decrease of 95%. Eventually, Ether might even become a deflationary currency. Ethereum will be considered deflationary if the number of tokens issued per day is less than the amount burned (another way of saying permanently destroyed). The burn mechanism was introduced by EIP-1559 in August 2021. Since the merge, the network’s daily issuance has dropped to 772 tokens per day, down from 12,500 before the upgrade. In short, while some may be disappointed with the Ether price action following this merger, the fundamental backdrop is more interesting than ever. On the fund side, we are closely watching the consolidation at current levels and remain optimistic toward a bull market return against bitcoin for ETH.

Celsius CEO Alex Mashinsky resigned yesterday, adding that he regrets that his role at his failed cryptocurrency lending business has become a growing distraction. “I have chosen to resign as CEO of Celsius Network today,” Mashinky said in a statement. “Nevertheless, I will continue to maintain my focus on working to help the community unite behind a plan that will provide the best outcome for all creditors – which is what I have been doing since the company filed for bankruptcy.” Meanwhile, there are growing rumors that FTX is considering bailing out Celsius through an asset buyout offer. Bloomberg reported FTX’s interest in Celsius Network based on information from a person familiar with the company’s founder, Sam Bankman-Fried.

Strike, a bitcoin payments company, has raised $80 million in a Series B funding round. Venture capital firm Ten31, which focuses on Bitcoin companies, was the lead investor. Note, however, that Washington University in St. Louis and the University of Wyoming also participated, according to an announcement Tuesday. Strike uses the Lightning Network, a layer 2 solution that speeds up bitcoin transactions so the cryptocurrency can be used to make daily purchases.

Could the next bullish wave be based on bitcoin’s growing utility, rather than what it represents in a more philosophical way? That’s exactly what Mike Novogratz, CEO of Galaxy Digital, believes. On a panel earlier today, he suggested that price action in 2020 and 2021 was “probably 80% history and 20% utility.” Unlike previous cryptocurrency rises, bitcoin’s next rise should be “50% story, 50% utility,” Mr. Novogratz predicted. “I see all the people building apps, people building fast, scalable systems that are user-friendly. We don’t have them yet. That’s why we are where we are. But in the next few years, they’re going to come.” During the panel, Novogratz also revived the audience with his optimistic prediction of the “inevitability” of crypto success. “The word inevitable keeps coming up. There is a sense of inevitability that we are in the right space, inevitable that bitcoin will have its day,” Novogratz said. He also expressed confidence that Web3 and non-fungible tokens will be a big part of the gaming space in the future.

The Rivemont crypto fund remains in a defensive position. At the time of writing, about half of the capital is exposed, exclusively to bitcoin. In fact, we’ve seen a rebound in the BTC.D bitcoin dominance index since its systematic fall since the beginning of the summer.

The presented information is as of September 28th, 2022, unless otherwise indicated and is provided for information purposes only. The information comes from sources that we believe are reliable, but not guaranteed. This statement does not provide financial, legal or tax advice. Rivemont Investments are not responsible for any errors or omissions in the information or for any loss or damage suffered.

The domino effect following the bankruptcy of crypto giant FTX was the theme of our most recent communication. Another one of those pieces fell apart this week, with crypto lender BlockFi announcing it would file for bankruptcy.

“Never in my career have I seen such a complete failure of corporate controls and such a complete absence of trustworthy financial information as it occurred here”. These are weighty words shared by FTX’s new CEO, restructuring expert John J. Ray III, he who held the same role in the Enron saga in 2001.