After weeks of disappointment for investors, bitcoin has finally offered some encouraging action this past week, providing a welcome respite from the fall of the past few months. The total capitalization of the crypto market has surpassed the $1 trillion mark again, a threshold that was thought to be a given for the industry just a few months ago. More importantly, for bitcoin specifically, the price has broken through two crucial resistances, the one that stood at $21,900 and the all-important 200-week moving average at $22,700.

The price has never stayed below the 200-week moving average for long, and every time it has broken above it, it has been the beginning of a new long-term uptrend. While macroeconomic conditions are quite different from previous episodes, this is nevertheless an encouraging picture that may give us hope that the bottom is officially behind us. 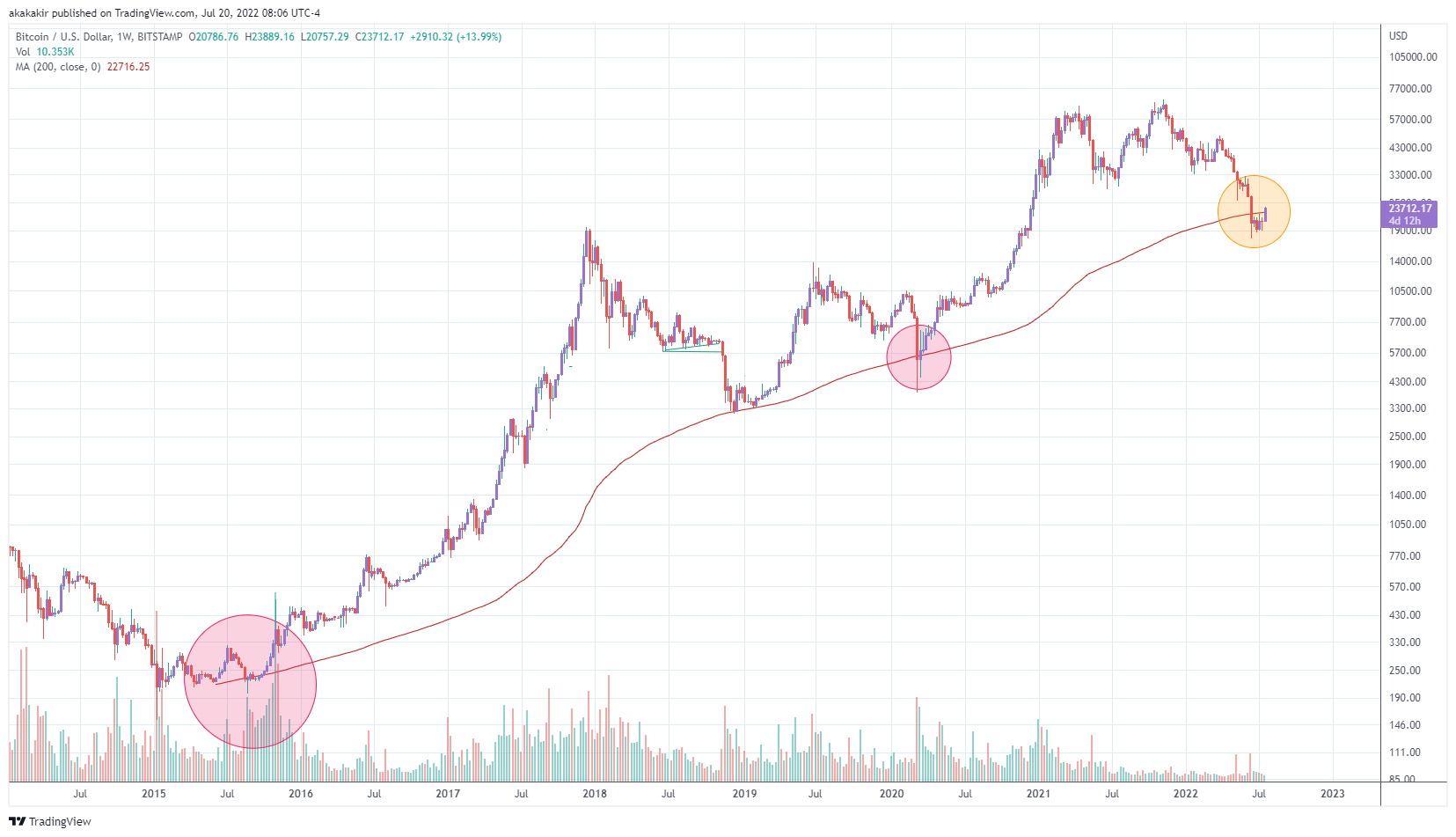 After a 73-day high, bitcoin also officially left the “extreme fear” zone on Tuesday. The “Fear and Greed” crypto index went from “severe fear” to “fearful,” with a score of 30 out of 100. Since then, it has risen slightly, reaching the current score of 31. The index scores the current attitude of the entire cryptocurrency market on a scale of 0 to 100. The index is primarily based on information about search trends, social media sentiment, surveys, as well as volatility, volume and market dominance of bitcoin.

This overall uptrend is definitely helped by Ether, which had a particularly positive week. The upward movement in the Ethereum price can most likely be attributed to the successful completion of one of the last pre-merger tests by the Ethereum developers. The transition to a proof-of-stake consensus mode is expected to take place in September. At least that’s the most recent official forecast.

Of note, Polygon (MATIC) this week launched its new scaling solution to further reduce transaction costs on the Ethereum chain. Polygon zkEVM is Polygon’s zero-knowledge scaling solution. Ultimately, it aims to surpass the transaction throughput offered by Visa. Polygon says the system works effortlessly with all existing smart contracts, development tools and wallets, while also creating less friction for users by removing the need for any sort of code modification or reimplementation. “The holy grail of Web3 infrastructure should have three major properties: scalability, security, and Ethereum compatibility” said Mihailo Bjelic, co-founder of Polygon. Bjelic described zkEVM as “a breakthrough technology that finally achieves that, […] opening a new chapter of mass adoption,” while noting that “until now, it has not been practically possible to offer all these properties at once.”

Not all is suddenly rosy in the industry, however. While we’ve been writing repeatedly about the saga of crypto lending firm Celsius for the past few weeks, the company has now officially filed for bankruptcy protection. If we knew the situation was critical, the official picture thus discovered is possibly even worse than anticipated, with a $1.2 billion hole in its balance sheet. Celsius has $4.3 billion in assets and $5.5 billion in liabilities, according to the filing with the U.S. Bankruptcy Court for the Southern District of New York. Celsius said in its asset list that it owns about $600 million of its native CEL token. However, the company said in the report that the total valuation of the CEL market as of July 12 was about $170.3 million. 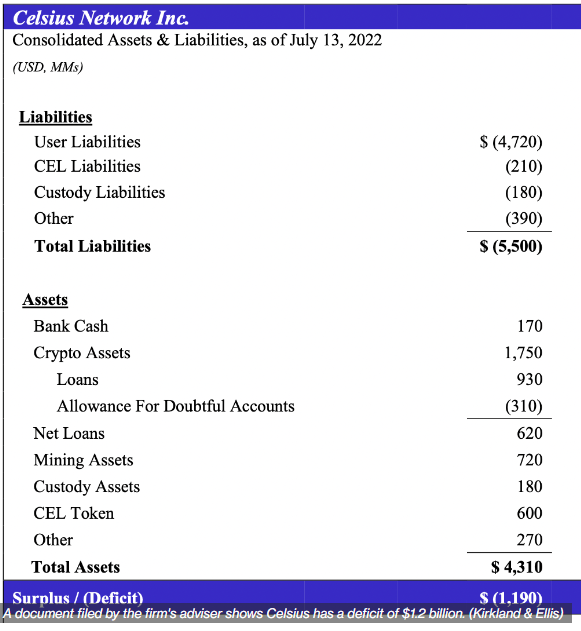 It goes without saying that this is a resounding failure for the Caisse de Dépôt du Québec’s first dip in the world of cryptocurrencies, as its US$150M investment seems destined to disappear for all intents and purposes. Beyond the choice of investment, which was already perplexing at the time of its announcement, one can also strongly question the due diligence process that obviously missed important operational flaws. In its Fall 2021 press release, CDPQ shared the words of Alexandre Synnett, vice president and chief technology officer for the organization. “Celsius is the world’s leading cryptocurrency lender and has a strong leadership team that puts transparency and customer protection at the core of its business.” It read at the time. Now, the increasingly clear picture shows us that these are exactly the elements that have been lacking. What we are learning about the operations is closer to a true Ponzi scheme.

The Fund has also been somewhat condescending in its approach to the industry, once dismissing direct investments in bitcoin, for example, and looking instead for diamonds in the rough. Yet an investment in Celsius was really a bet on the centralized finance of cryptocurrencies, all while the industry as a whole is on the contrary seeking to decentralize finance. In short, they were betting on an old financial model that only made cryptocurrencies its transactional tool. What is unfortunate here is that the industry certainly offers multiple truly innovative investment opportunities. The CDPQ is in danger of being scalded today and reluctant to any new collaboration in the crypto universe. This is very bad news, and it is at least partly its own fault.

As for Three Arrows Capital (3AC), it owes a whopping $3.5 billion to 27 different companies, including Blockchain.com, Voyager Digital and lender Genesis Global Trading, according to court documents. Of that $3.5 billion total, Genesis lent 3AC the most. It gave the now-bankrupt company a $2.36 billion loan that was under-collateralized and had a margin requirement of 80 percent.

Bitcoin’s correlation with stocks, while still positive, has bottomed out for the year. According to Bloomberg statistics, the 40-day correlation between BTC and the Nasdaq 100 index is currently below 0.50. This is very different from last April, when its 30-day correlation with the Nasdaq was at its highest level in over a year. The correlation remains positive, indicating that bitcoin and tech stocks continue to move in tandem. However, if the correlation continues to deteriorate, it could be interpreted as an indication that the crypto has hit its own bottom and is ready to rebound.

Moreover, according to research from blockchain intelligence firm Glassnode, signs of seller fatigue are generating conditions that resemble a market bottom for bitcoin. The realized losses, or the losses incurred in selling assets, show the extent of investor capitulation. More than 80 percent of the wealth saved in bitcoin is now more than three months old, indicating that the May and June selling waves have exhausted virtually all short-term speculators. This is consistent with data from the end of the 2012, 2015 and 2018 bear market lows, which all occurred when USD wealth over three months old soared above 80%. 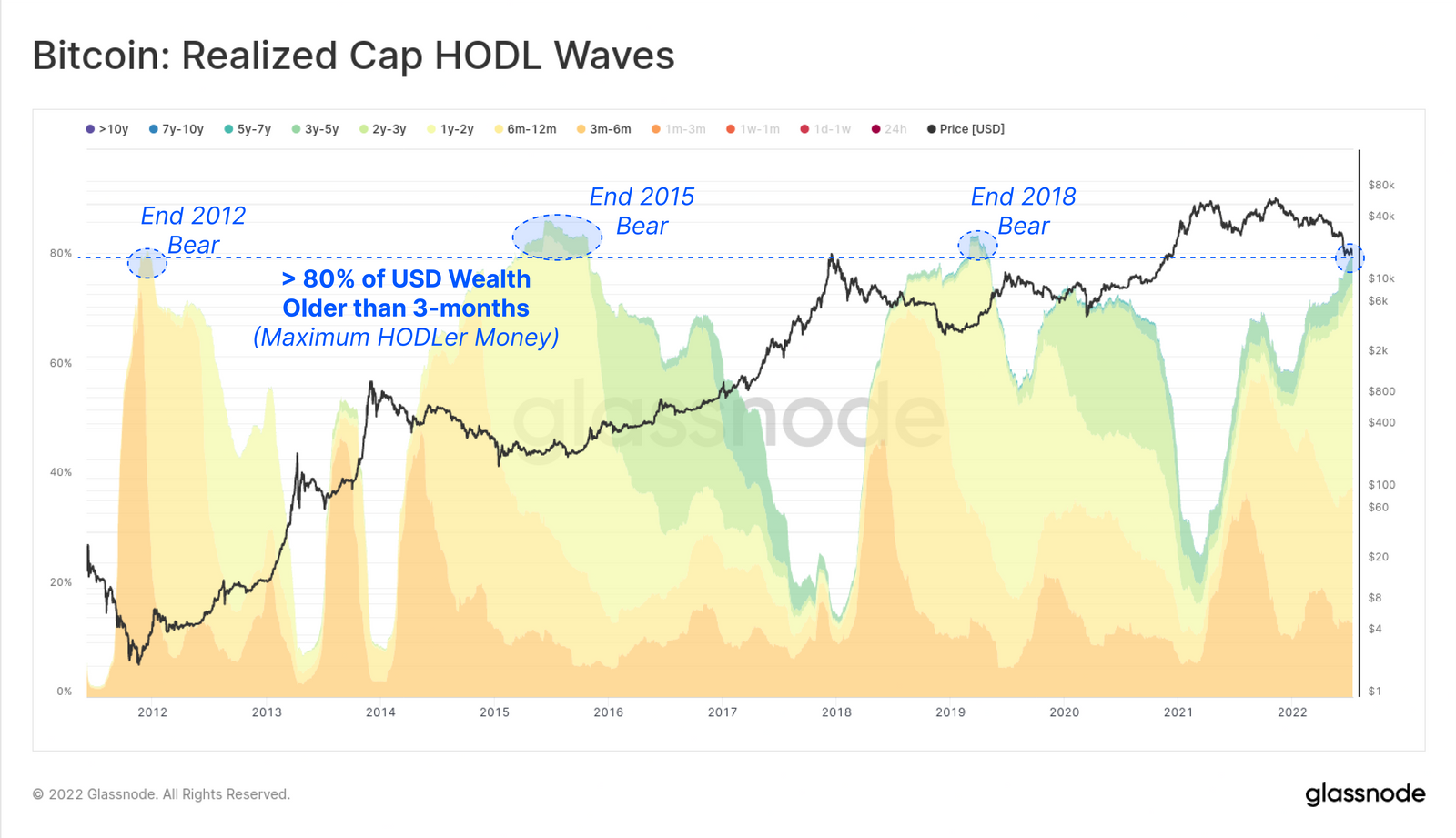 We gradually re-exposed all capital over the course of the week. While the positioning is predominantly in BTC, the fund also has over 20% exposure to Ether. We also have some minor positions in SAND and UNI.

The presented information is as of July 20th, 2022, unless otherwise indicated and is provided for information purposes only. The information comes from sources that we believe are reliable, but not guaranteed. This statement does not provide financial, legal or tax advice. Rivemont Investments are not responsible for any errors or omissions in the information or for any loss or damage suffered.

The last six days can really be divided into two phases. At the end of last week, which coincided with the end of the third quarter of the year, the price of bitcoin really fought against all odds to stay in its consolidation channel, with the US stock market indexes swimming at 2022 lows.