One week follows another for bitcoin. The long weekend (Monday having been a holiday in the U.S.) was particularly tough for the crypto, with the price sliding as low as $17,600 and closing below $20,000 for the first time since December 2020. The price rebounded more than 20% in tandem with a bullish day on U.S. stock markets yesterday. Now, as they are back in the red today (at the time of writing), bitcoin is resuming its battle to stay above $20,000.

As is often the case these days when inflation is the central economic theme, markets are eagerly awaiting Fed Chairman Jerome Powell’s remarks today. Powell heads to Capitol Hill for his semi-annual testimony before Congress, just days after overseeing the largest interest rate hike since 1994. He will testify first before the Senate Banking Committee on Wednesday and then before the House Financial Services Committee on Thursday. Powell has so far enjoyed bipartisan political support. Will the current difficult economic environment create cracks in this veil of confidence? The answer will come in the next few days.

After freezing withdrawals, exchanges and transfers between accounts now ten days ago, the problems with the Celsius network are far from over. In an update to investors on Sunday, the New Jersey-based firm reiterated its “ongoing goal is stabilizing liquidity and operations.” They added that “this process will take time.” Celsius said it is maintaining “an open dialogue with regulators and officials” and that it is seeking to “find a solution.” Celsius’ lead investor, BnkToTheFuture, meanwhile, has offered to help the company by deploying a “financial innovation” similar to the one used to save cryptocurrency exchange Bitfinex once. “I believe that traditional finance will not have a timely solution for Celsius, as we have seen in the past with Mt. Gox which is still unsolved 10 years later,” wrote BnkToTheFuture CEO Simon Dixon in a blog post.

Bitfinex had turned to issuing new tokens in May 2019 to raise $1 billion, selling the fresh token in exchange for Tether (USDT) to replace $850 million that the exchange lost to Panama-based Crypto Capital. Dixon claims, “this was resolved in nine months and worked very well for depositors.” Dixon said he would not disclose specific details of the suggested recovery plan “until Alex and the Celsius board are ready,” adding that “it’s my role to propose solutions because we have the experience, licenses and technology to do so.” Either way, nothing to improve the sleep of investors with their savings frozen on the platform in the short term.

Following the implosion of LUNA and its stable UST token that led to the disappearance of tens of billions of dollars in value, Do Kwon and Terraform Labs are now being hit with a class action lawsuit. Plaintiff Nick Patterson alleges, among other things, that the Terra tokens were sold as “unregistered securities” and that the “defendants made a series of false and misleading statements regarding the Terra ecosystem’s largest digital assets by market capitalization, UST and LUNA, in order to induce investors to purchase these digital assets at inflated rates.”

After the saga that was the UST algorithmic stablecoin, it’s predictable that investors will be watching the evolution of projects with similar value propositions. One of these, though much smaller in capitalization, is the Tron USDD stablecoin. Yet, after nearly ten days of trading under the dollar, Tron’s stablecoin has yet to regain parity with the greenback. It is trading at about $0.97.

Indicators that we are in the bottom of the cryptocurrency markets are multiplying. The U.S. GBTC fund’s discount is at an all-time low as the SEC’s decision on the real bitcoin-based exchange traded fund approaches. Grayscale Bitcoin Trust continues to trade at a discount as the July deadline for its Bitcoin ETF application with the SEC gets closer and closer. With GBTC subject to a six-month lock-in period, holders are at a loss, as they can only cash out their money by selling their GBTC shares. At the time of its creation, there was a significant premium. You can see the evolution of this premium here:

If there is interest, you can be sure that a financial firm will try to capitalize on it. To this end, ProShares has just launched the first bitcoin short-selling ETF. BITI gives investors the opportunity to “potentially profit or hedge their cryptocurrency holdings” in the event of a price drop.

Those of you who were already reading us in 2018 will remember our discussions of bitcoin futures backwardation during that major bear market. That rare situation is back, as futures contracts trade below the spot market price. These fixed-month contracts typically trade at a slight premium to the spot markets, as investors demand more money to withhold the settlement. This situation is not exclusive to the cryptocurrency markets. Therefore, futures contracts should trade at an annualized premium of 5-12% in healthy markets. Yet, the annualized premium for 3-month bitcoin futures is now in the negative. 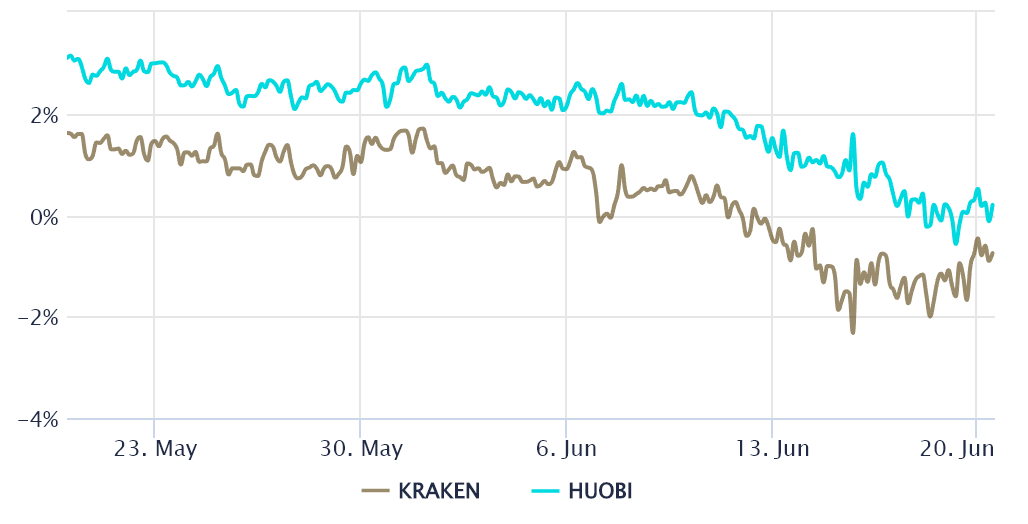 As Quebec-based analyst Jonathan Hamel recently noted, these sharp declines in bitcoin are commonplace rather than an exception. He shared this chart which shows that we are now in the previous thresholds of declines from the highs reached in each cycle. With the low reached over the weekend, it was a 72% drop that bitcoin recorded. 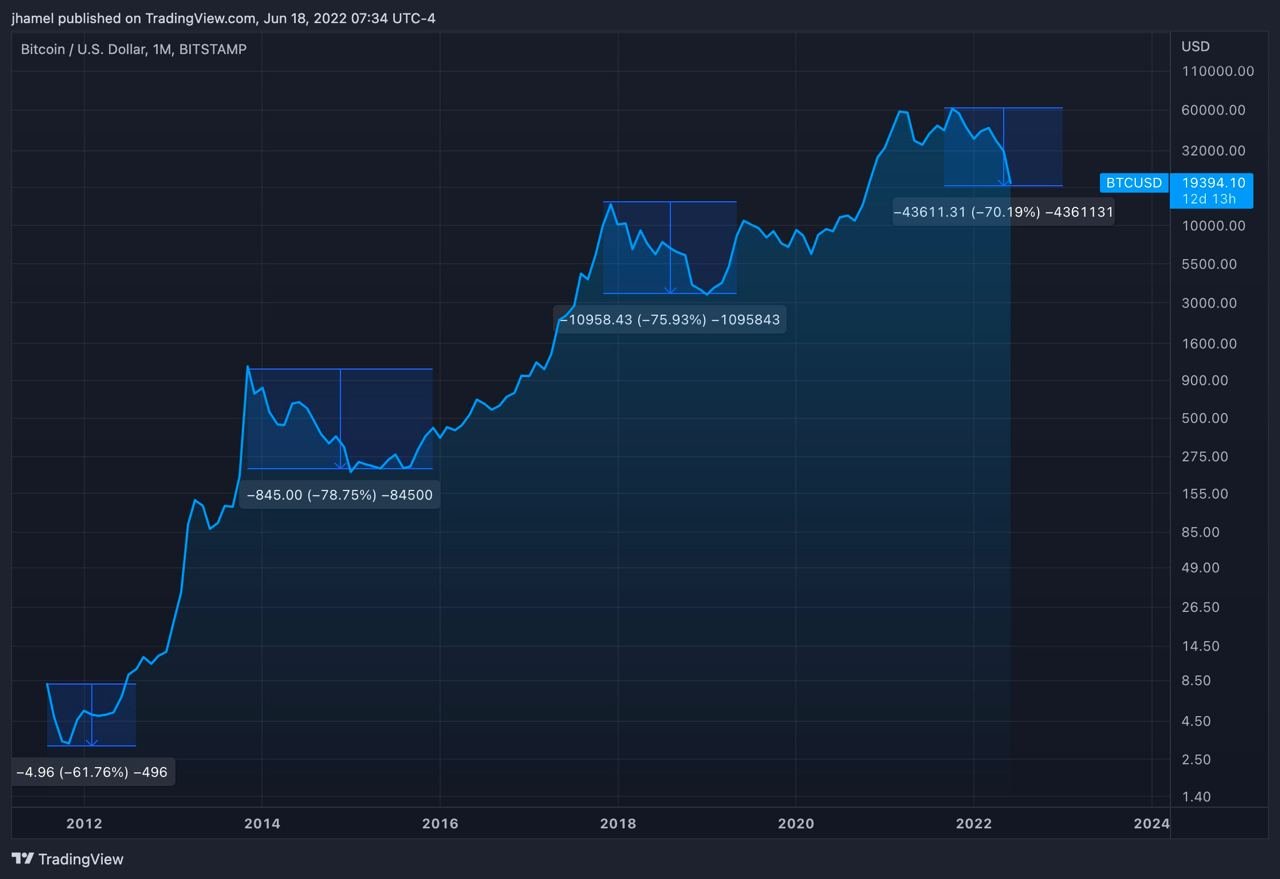 A surprising statistic from Glassnode’s data, when as of June 20, 56.2% of wallet addresses on the blockchain were still worth more in U.S. dollars than when they were created. In short, more than half of the addresses remain in the profitability zone.

Citibank has put the likelihood of the global economy experiencing a recession in the near future at nearly 50 percent as central banks “tighten monetary policy and demand for goods weakens.” The future of cryptocurrencies will likely be tied to these macroeconomic trends. Nevertheless, it is impossible not to note that historically, the current area from the highs has always proven to be highly profitable over the medium to long term.

The Rivemont crypto fund will have a cash flow of about 50%.

The presented information is as of June 22nd, 2022, unless otherwise indicated and is provided for information purposes only. The information comes from sources that we believe are reliable, but not guaranteed. This statement does not provide financial, legal or tax advice. Rivemont Investments are not responsible for any errors or omissions in the information or for any loss or damage suffered.