As the stock market hit new lows for the year, the cryptocurrency market correlation was just as strong as it has been in recent months. After the blow delivered by Terra’s collapse last month, the market really broke down this week. Let’s first answer the question that certainly on the Rivemont Crypto Fund investors’ mind: how was the Fund positioned? More than half of the positions were sold when support was breached at $28,500, avoiding a significant portion of the pullback. At the time of publication, the fund is 65% in cash.

After a public debut less than a year ago, Coinbase announced it was cutting 18% of its workforce, noting that economic conditions are “changing rapidly” and the world appears to be entering a recession. CEO Brian Armstrong said the company had grown too quickly during the early expansion period. “It is now clear to me that we hired too much,” he wrote. Its competitor Crypto.com is no exception to the trend, cutting 5% of the company’s staff. In fact, exchanges Gemini, Bitso and Buenkit all made such announcements in the most recent week.

Beyond the very difficult week on the market, it was undoubtedly the decision by crypto lending platform Celsius on June 12, announcing that it was suspending all withdrawals on its lending platform, citing “extreme market conditions” and the need to “stabilize liquidity,” that garnered attention. In the hours following the announcement, Celsius’ native token, CEL, dropped 70 percent at one. CEL’s downward spiral came amidst a gigantic collapse that saw the total capitalization of the cryptocurrency market plunge to less than a trillion, or more than two-thirds of its all-time high of $3 trillion, while bitcoin fell to levels not seen since 2020.

Remember that the Caisse de Dépôt du Québec had invested $150 million of the public purse in the Celsius network, citing at the time to be looking for diamonds in the rough, and rejecting out of hand direct investments in bitcoin. These are words that are about to age as well as milk…

What exactly is happening? The short-term cause of Celsius’ problems appears to be due to Lido’s Staked Ether (stETH), a token linked to Ethereum’s ETH. The stETH represents ETH locked onto the Ethereum 2.0 chain, a parallel chain to the main Ethereum blockchain that will eventually combine with the main Ethereum network in an event known as the merge, moving the network from a proof-of-work consensus mechanism to a proof-of-stake. On decentralized finance platforms, stETH is often used as collateral to borrow ETH. The problem is that stETH has recently lost its anchor to ETH, threatening these positions. With holders selling and the timing of the merger still uncertain, there is now strong selling pressure on stETH. Yet, in an effort to meet the platform’s promise of returns for users, the Celsius platform has locked up a lot of capital in stETH, so a loss of stETH’s anchor could cause a wave of redemptions, triggering a liquidity crisis.

Meanwhile, a lot of money has left Celsius. In the first half of 2022, the total amount of digital assets locked onto the protocol fell from about $24 billion to $12 billion. The biggest problem with Celsius’ operations was that it was increasingly clear that the company was taking extreme risk with user funds that were often not able to be properly quantified. Celsius is at risk of a margin call of 17,900 wBTC (wrapped Bitcoin on the ETH network). The liquidation price level was $20,272 before Celsius filled the vault with additional collateral, pushing the liquidation price to $18,300. The main issue is that this liquidation level is completely transparent and opportunistic speculators could sell indiscriminately to force Celsius to liquidate…

Meanwhile, after freezing withdrawals on Sunday, the company reportedly turned to restructuring lawyers. First and foremost, Celsius is seeking financing opportunities from investors, but the New Jersey-based company is not ruling out other options, including a financial restructuring, according to the WSJ report. The company finally broke its silence yesterday, mentioning only via Twitter that the company “is working as quickly as possible and will share information as and when it becomes appropriate. Acting in the interest of our community remains our top priority”.

Another example of the important lesson of this industry. Not your keys, not your coins. Note that in parallel, TRON’s algorithmic stablecoin, USDD, also lost its peg to the U.S. dollar this week and is trading for $0.97 per dollar. In short, the incredible uncertainty generated by all of these circumstances is adding to an already strong bearish pressure with the term recession now being openly mentioned. It seems that a huge wave of margin liquidation is inevitable.

MicroStrategy is now losing over $1 billion on its corporate bitcoin reserve bet. Many are worried that the company will face a margin call of its own, which could add selling pressure of 129,218 BTC to the markets. Yet Michael Saylor has lost none of his confidence in the digital asset and his company’s positioning. “When MicroStrategy adopted a Bitcoin strategy, it anticipated volatility and structured its balance sheet so that it could continue to #HODL through adversity.” He said on Twitter. He outlined contingency plans, noting that even if all the available BTC were to be posted as collateral for the loan — implying a BTC price of under $3,600, the March 2020 bottom — the pool of available cash would not end there. “That’s all FUD,” he told mainstream media in a subsequent interview about the issue. “We started with $5 billion of unpledged collateral, we borrowed $200 million against it, so that’s a loan-to-value ratio of 4%. If Bitcoin fell 95% from that number the we’d have to post additional collateral.” He additionally called the margin call question a “nothing issue.”

Is the worst now behind for bitcoin? No one can say without a doubt, but there are several reasons to believe so. First, the price is currently below the 200-week moving average, an area that has historically served as support and below which the price has never stayed for long. 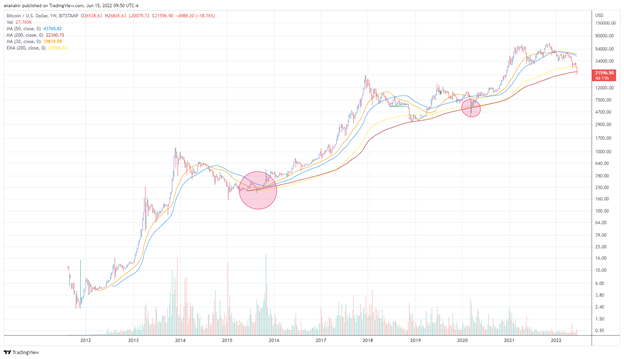 It should also be remembered that despite the current decline, bitcoin’s value proposition is only continuing to improve. As Anthony Pompliano mentions in this excellent letter, the hash rate of the bitcoin network has more than quadrupled in the last three years. It continues today to reach record levels, proving that the network has never been more secure. 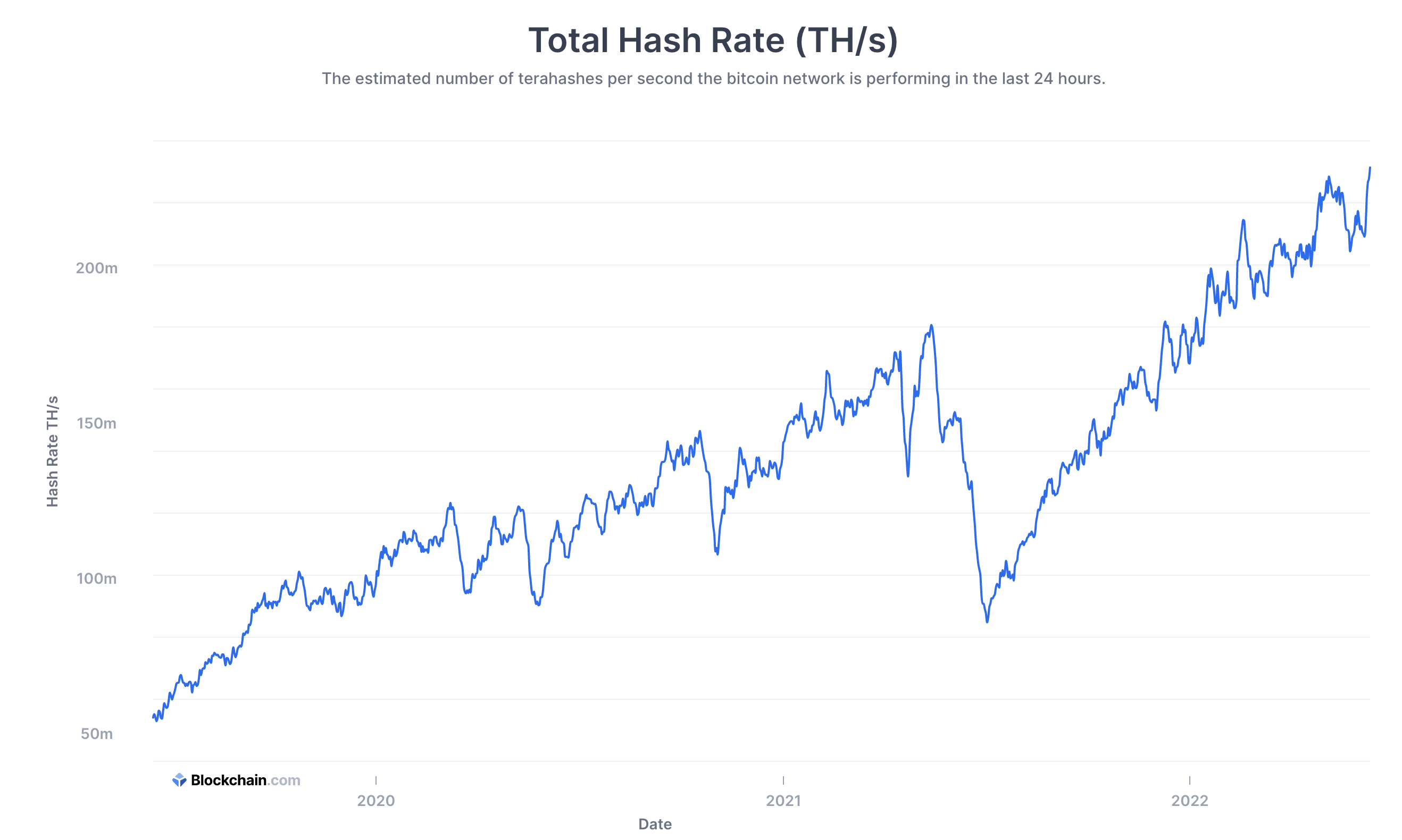 If we look at the distribution of bitcoin on the chain, we see that wallet addresses containing 0.01 bitcoin, 0.1 bitcoin and 1 bitcoin continue to reach record levels. He adds the interesting statistic that, “Another way to look at this is the cost basis for the long-term and short-term holders (measured by 155 days of holding). You can see here that Will Clemente pointed out that these two metrics are getting close to crossing, which signals the long-term holders are in the dominant position — Long-term holder cost basis is rising as short-term holder cost basis declines. If this persists and STH crosses below LTH, historically has marked generational Bitcoin buying opportunities. We are getting close.” 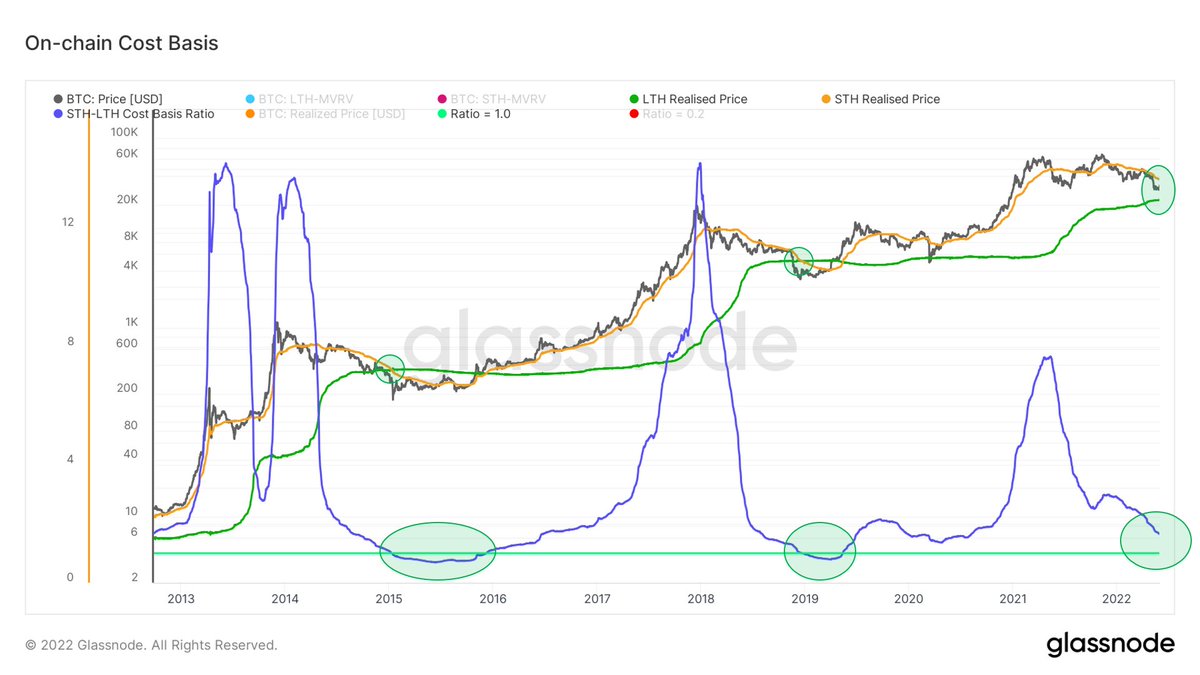 A majority of long-term holders could also finally break bitcoin’s stock market correlation and finally allow it to emerge as a hedge asset in an inflationary environment, something it has failed to accomplish thus far.

In the short term, all markets are waiting for the US Fed meeting. It is certain that an interest rate hike will be announced this afternoon, but how much will it be? As it rarely happens, there is no consensus. Will Friday’s worrisome inflation data push a hike higher than the expected 50 points? The markets seem to be anticipating a 75 points hike, while some analysts feel that a 100 points hike is absolutely necessary right now. In short, it’s another day that could make a splash.
Rivemont Investments, manager of the Rivemont Crypto Fund.

The presented information is as of June 15th, 2022, unless otherwise indicated and is provided for information purposes only. The information comes from sources that we believe are reliable, but not guaranteed. This statement does not provide financial, legal or tax advice. Rivemont Investments are not responsible for any errors or omissions in the information or for any loss or damage suffered.