A calm week after the storm in the cryptocurrency market. The price of bitcoin is indeed in a clear consolidation zone following the sharp decline earlier this month. At the same time, its dominance index over the whole market is gradually climbing, meaning that altcoins are currently struggling to make their mark.

Let’s continue with what has been the major theme of the last two weekly letters, the implosion of the stablecoin UST and its native token LUNA. The end of the saga? Unsurprisingly, the price has remained in the bottoms for both assets ($0.00018 for a LUNA and $0.07 for a UST at the time of writing). Even less surprisingly, the plan to “resurrect” the network was accepted by a strong majority. It was a no-brainer, as the players invited to vote already have nothing to lose. As a result, a “snapshot” of the Terra blockchain should take place this Friday, before the launch of “Terra 2.0”, a so-called rebirth of the Terra ecosystem after the implosion of the original chain.

Investors who held more than 10,000 LUNA before the implosion of UST will receive the new tokens periodically, to avoid an immediate sale. More than 30% of their tokens will be released initially, and the remaining 70% will be released over two years. New tokens will be distributed after six months to these holders. Portfolios containing more than 1 million LUNAs or USTs before the UST deletion will have to wait more than a year to receive tokens, with a four-year vesting period thereafter, according to the stimulus plan. The idea of taking a “snapshot” from before the crisis is to relaunch the network with a viable offer from LUNA. “The offer to Genesis is considerably lower than anyone expects, closer to 116.7 million and rising to 182 million after one year,” the plan reads.

End of story next week as we’ll see how the market will value these new tokens created out of thin air. One thing is for sure, despite the eternal optimists, this is a clear case of not being able to put the toothpaste back in the tube.

News that is both important and encouraging in the integration of cryptocurrency payments into everyday life. Payment giant Stripe has announced that customers will once again be able to convert their incoming payments or balances into Bitcoin, four years after the service was suspended. This time, Stripe’s Bitcoin transactions will be powered by an app created in partnership with OpenNode. The crypto startup, which just raised $20M in a Series A round, relies on the Lightning Network, a blockchain scaling solution that handles off-chain transactions, making transactions on the main chain faster and cheaper.

In 2018, when Bitcoin services were first discontinued, the firm cited rising fees and delayed transactions as evidence that Bitcoin had “become better suited to being an asset than a means of exchange.” We couldn’t agree more. At the time, Stripe identified the Lighting Network as a promising technology that could one day enhance Bitcoin’s status as a convenient digital currency for customers. Here we are today.

The Ethereum ecosystem is ready for a huge test phase. The merger of the Ropsten test network is indeed scheduled to take place on June 8. Ropsten is one of the many test networks created by the Ethereum Foundation in 2017. This specific test network is considered the best replica of the main Ethereum network because it follows a similar structure. This allows developers to perform realistic deployment tests before making updates to the actual core network. The Ropsten testnet merge will see the proof-of-work (PoW) network combined with a new proof-of-stake (PoS) consensus layer testnet, which is scheduled for genesis on May 30. It will simulate what will happen once the actual merger between Ethereum and the Beacon chain finally takes place and becomes a PoS network.

The actual migration is currently scheduled for August.

Let’s finally point out that it was 12 years ago this week that Laszlo Hanzecz bought 2 pizzas with 10,000 bitcoins. This is the first recorded transaction with a decentralized digital currency in exchange for physical items. Although this transaction is now worth $295M USD for two pizzas, Hanzecz said he has no regrets. After that first transaction, Hanzecz did it again several times that summer and spent a total of 100,000 bitcoins on pizzas, which are now worth $2.9 billion.

A reminder that despite the current low point, it’s an absolutely breathtaking journey that bitcoin has made in just a few short years.

Compared to a closing figure of $31,300 on May 16, bitcoin closed Monday at around $30,287. This marks the eighth consecutive week of declines, a record in the crypto’s history. Prior to last week’s record seventh consecutive red candle week, the previous mark for consecutive losing weeks was six, during bitcoin’s bear market in 2014. Back then, it fell from $507 to $323 from Aug. 25 to Oct. 6.

Nevertheless, all is not gray. The action in recent days has shown some resilience, with bitcoin still finding its share of buyers below $30,000. While sharp declines on the NASDAQ continue to drag BTC down, it seems to be looking to rebound more easily. This week, the correlation has also been less strong, at least so far.

The consolidation channel is particularly evident. The fund will remain in a defensive position while in the channel – which has served it particularly well in recent weeks. 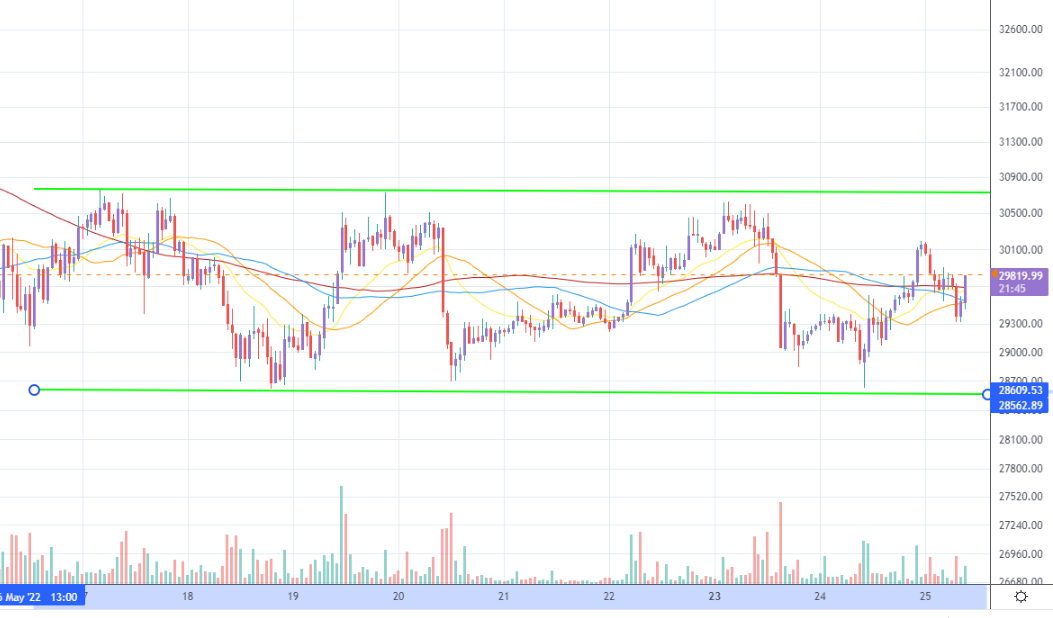 The presented information is as of May 25th, 2022, unless otherwise indicated and is provided for information purposes only. The information comes from sources that we believe are reliable, but not guaranteed. This statement does not provide financial, legal or tax advice. Rivemont Investments are not responsible for any errors or omissions in the information or for any loss or damage suffered.