Let’s start this weekly letter where we left off last week, that is, on the saga surrounding the complete crash of the LUNA token and its parallel “stable” token UST. If you are not familiar with the events, we strongly suggest that you first read our communication from last week to fully understand what follows.

A week later, the timeline of events is now clearer. On the first weekend of May, as the stablecoin UST was showing its first signs of instability by having slipped from its peg to the dollar at $0.985, the Luna Foundation Guard, the nonprofit organization charged with overseeing the health of Terra’s ecosystem, voted to deploy $1.5 billion in bitcoin and UST from its treasury in an attempt to re-peg the UST to the US dollar. This was the activation of a planned contingency plan in the face of such a scenario, as the foundation had accumulated $3.5 billion in reserve consisting of bitcoin, avalanche, LUNA and UST. The goal was to use this capital to buy huge amounts of UST, creating buying pressure that, according to the system’s logic, would bring the price of UST back to $1.

Yet, the very next day, UST continued to fall. By Tuesday, as the UST price reached catastrophic levels, LFG’s reserves were already virtually empty. In fact, during this period there were two transfers, the first of 52,189 BTC to Gemini and another of 28,205 BTC to Binance. It is impossible to confirm beyond any doubt that these tokens were indeed sold in order to buy UST, but the downward pressure on the price of BTC last week suggests it. Here’s what the foundation’s reserves looked like on Monday: 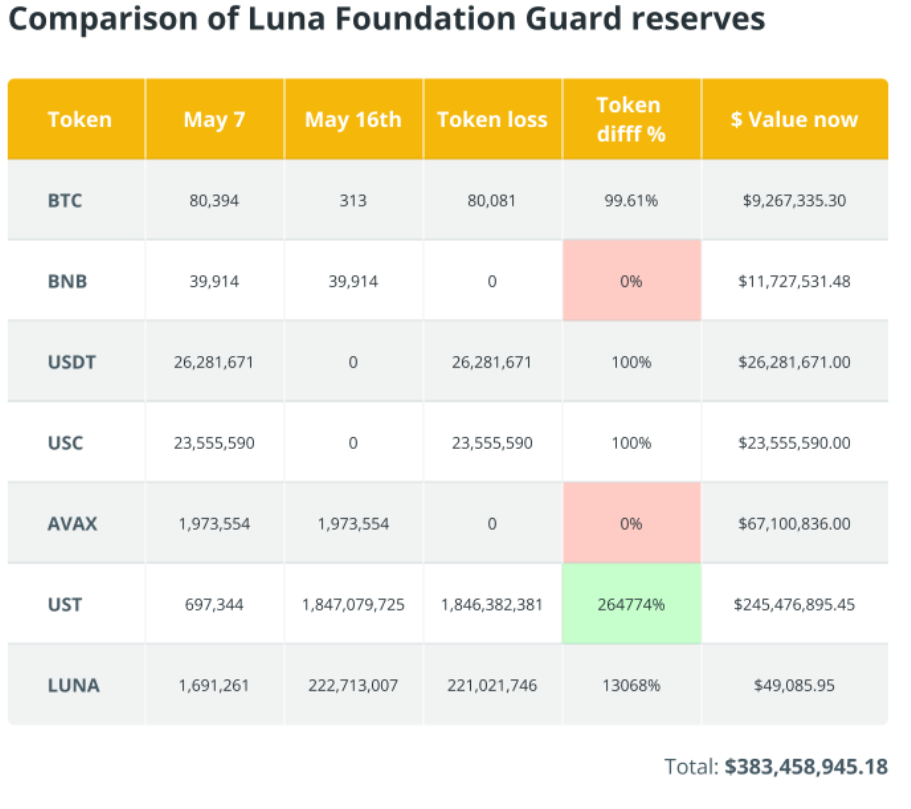 Nothing was enough. At the time of writing, a LUNA token, whose quantity has climbed 1,893.380% by the algorithm’s logic, is worth less than 2 hundredths of a penny. The UST is far from its supposedly guaranteed value of the dollar, as it is currently trading below $0.10.

Is this the death of LUNA and UST, which until a few days ago was a top 10 project in terms of capitalization?  Definitely in terms of tangible value and reputation if you ask us. The project founder and the foundation, however, have not necessarily said their last word. Indeed, a vote on a hard fork plan proposed by co-founder Do Kwon is taking place as we write this. The plan is to split the current chain in two. The goal is to allow purists to keep the current collapsed blockchain, which will now be called “Terra Classic”. The native token will be the LUNA Classic (LUNC). The new blockchain will distribute 1 billion LUNA tokens among developers, UST holders, and those who held or bet on LUNA or its derivative projects before the price of the stablecoin slipped. The redistribution will include acquisition schedules and token locks for most LUNA, ostensibly to avoid a sharp price drop as Terra determines how to move forward without UST in its new protocol. Indeed, the stablecoin would be abandoned altogether for the future.

The approach will remind long time cryptocurrency followers of what once happened with Ethereum and Ethereum Classic.

While there’s a good chance that the proposal will indeed pass (the yes side has 76.38% of the vote at the time of writing), it’s naive to believe that market forces will agree to erase the episode of the last ten days and assign true value to the tokens on either chain. In fact, that would be downright disturbing. Notwithstanding the fact that investors are certainly taking a hard hit right now, a serious industry cannot and should not assign value with a magic wand. Moreover, if this is to happen, it will be without the assistance of the Terraform Labs legal team. Advisory team members Marc Goldich, Lawrence Florio and Noah Axler all stopped working for the company in May, as their LinkedIn profiles show. Many employees have also jumped ship in recent days.

In return, the market was undoubtedly reassured by the success of the Tether (USDT) token in regaining its dollar peg. However, this did not come without a mass exodus of holders. 7.7 billion of the stablecoin has been withdrawn, resulting in a 7.8% drop in its market capitalization over the past seven days. It currently stands at $74 billion. Some investors have been quick to exchange their Tether for another popular U.S. dollar stablecoin, USD Coin (USDC), claiming that USDC has been audited and is already fully backed by cash and U.S. Treasuries. Tether claims the same, but there has always been doubt about the veracity of the company’s reserves.

In other news this week, it’s worth noting that recent data shows that China isn’t exactly absent from the bitcoin mining industry, and that’s after its complete ban last year. Indeed, according to data from the Cambridge Digital Assets Programme (CDAP), China has once again become a major bitcoin mining hub, with underground miners accounting for more than a fifth of the network’s hash rate. The report suggests that a sizable portion of Chinese bitcoin miners have found ways to adapt to the ban, using foreign proxy services to hide mining activity, rather than leaving the country. The new data shows that China now accounts for 21 percent of Bitcoin’s hashrate, second only to the United States, which generates 38 percent of the network’s computing work. “As the ban has taken hold and time has passed, it appears that underground miners have gained confidence and seem satisfied with the protection offered by local proxy services,” the CDAP report said.

Once the hurricane has passed, the damage from last week can now be seen. 1.2 billion in bitcoin derivatives were liquidated during last week’s hecatomb. According to data from Coinglass, more than $1 billion of all crypto assets were wiped out on May 8 alone – the largest figure in more than three months. Moreover, bitcoin recorded its seventh consecutive down week, a record that previously dated back to 2014.

The U.S. stock markets seem to have stabilized this week. Could conditions finally be right for bitcoin to rebound? Analysts are divided on whether bitcoin has bottomed. Will Clemente, senior analyst at Blockware, said he believes the asset has likely reached a “multi-generational” bottom based on multiple indicators, including a rapidly approaching “realized price.” The realized price is the average cost basis of all bitcoins purchased to date, last visited during a brief period in March 2020. Analyst Raoul Pal agrees, explaining that with the downward price action last week, bitcoin may have “pulled straight down” to the base of the current technical formation and is now in a range that will eventually lead to another price increase. “This is exactly the kind of pattern we had in March 2020.” The Crypto Fear and Greed Index plunged to 8 on Tuesday, which is actually the lowest since March 2020.

No protection against inflation? Renowned Anthony Pompliano took the liberty of putting it all in context yesterday: 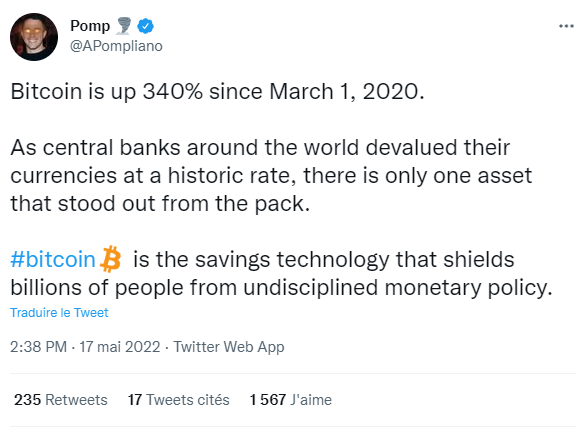 So far, however, the market trend remains deeply correlated with U.S. stock indexes and inflation fears. Remarks from the Fed’s Jerome Powell yesterday confirming continued pressure on financial conditions until inflation shows signs of weakening pushed bitcoin below $30,000 and led to a red opening for stock markets today. Regardless, it’s when desperation shows up among investors that the best opportunities to enter the market have historically occurred.

In these uncertain times for all markets, alternative strategies can be particularly interesting. The Rivemont Alpha Fund has generated a return of 8.2% since the beginning of the year, net of all fees. All returns as of April 30th are available on this page.

The presented information is as of May 18th, 2022, unless otherwise indicated and is provided for information purposes only. The information comes from sources that we believe are reliable, but not guaranteed. This statement does not provide financial, legal or tax advice. Rivemont Investments are not responsible for any errors or omissions in the information or for any loss or damage suffered.