Investors’ attention across the various markets is focused on one thing today, that being the U.S. Fed’s decision on future interest rates. There is near consensus on an imminent half-percentage point increase. The central bank is also expected to launch a program to reduce its massive bond holdings by $95 billion per month starting in June. These are the signals that will be sent for what comes next that will have the biggest impact on the markets. Will people be prepared for even more pronounced increases in the near term – including a possible 0.75% increase – or will they stick with recent projections?  One thing is certain, while bitcoin has remained highly correlated to the U.S. stock market again this week, the digital asset will have another chance to decouple and prove itself as a safe haven in an inflationary environment. While we have been hoping for this scenario for a long time, we are not holding our breath…

Paul Tudor Jones, who has publicly defended digital currencies as an investment tool in the past, has been particularly pessimistic about the stock and bond markets. In an interview with CNBC yesterday, he said, “Clearly you don’t want to own bonds or stocks, you start with that. It’s going to be a very, very negative situation for either one of those assets classes. You can’t think of a worse macro environment than where we are right now for financial assets.” He added that the U.S. was entering “uncharted territory” by raising rates during a period of tightening in the Financial Conditions Index (FCI). In short, if it is part of bitcoin’s future to become a safe haven in times of inflation, we couldn’t imagine a clearer crossroads for the transition to manifest.

How much would you pay for all the bitcoins in the world? “Less than $25” was Warren Buffett’s answer at the annual Berkshire Hathaway shareholder meeting. Was the legendary investor stung by the fact that the total capitalization of BTC has surpassed that of his investment firm? One thing is certain, the man can’t seem to see the asset in any other light than that of a publicly traded company. “If you told me you owned all the bitcoins in the world and offered them to me for $25, I wouldn’t take them,” Buffett said. “What would I do with them?” Instead, Buffett said he would buy some of the country’s farmland, or some of the nation’s apartments. He reiterated his view that bitcoin is worthless because it produces nothing. His longtime business partner, Charlie Munger, goes even further. “In my life, I try to avoid things that are stupid, bad and make me look bad compared to someone else,” Munger said. “Bitcoin does all three. And third, it makes us look stupid compared to the Chinese communist leader. He was smart enough to ban bitcoin in China,” Munger concluded. Unsurprisingly, the market didn’t care for these comments. It must be said that an investor who takes a cue from China to defend his point will not receive a big ovation!

On September 7th, 2021, El Salvador was the first country in the world to adopt bitcoin as a legal tender. The Central African Republic, the second least developed country in the world according to the UN, has just followed suit, adopting bitcoin as its official currency alongside the CFA franc and legalizing the use of cryptocurrencies, the presidency announced Wednesday. The country boasts of being the first to do so in Africa. Obed Namsio, chief of staff to President Faustin-Archange Touadera, called the move “a decisive step towards opening up new opportunities for our country.” Opportunities for whom exactly, one might ask. Internet coverage in the Central African Republic is only 11%. The government may have been told that this will boost payments in the country, but it is not clear how yet.

While the price of bitcoin remains on a downward trend without visiting the lows of 2022, the level of difficulty of the network continues to break records. Historically, there has been a positive correlation between the two. Confirming its position as the most attack-resistant blockchain, Bitcoin recorded a new all-time record for network difficulty for the second time in April, rising from 28.587 trillion to 29.794 trillion. Greater network difficulty requires more computing power to successfully mine a block of bitcoin, which prevents bad actors from taking control of the network and manipulating transactions, known as double spending. 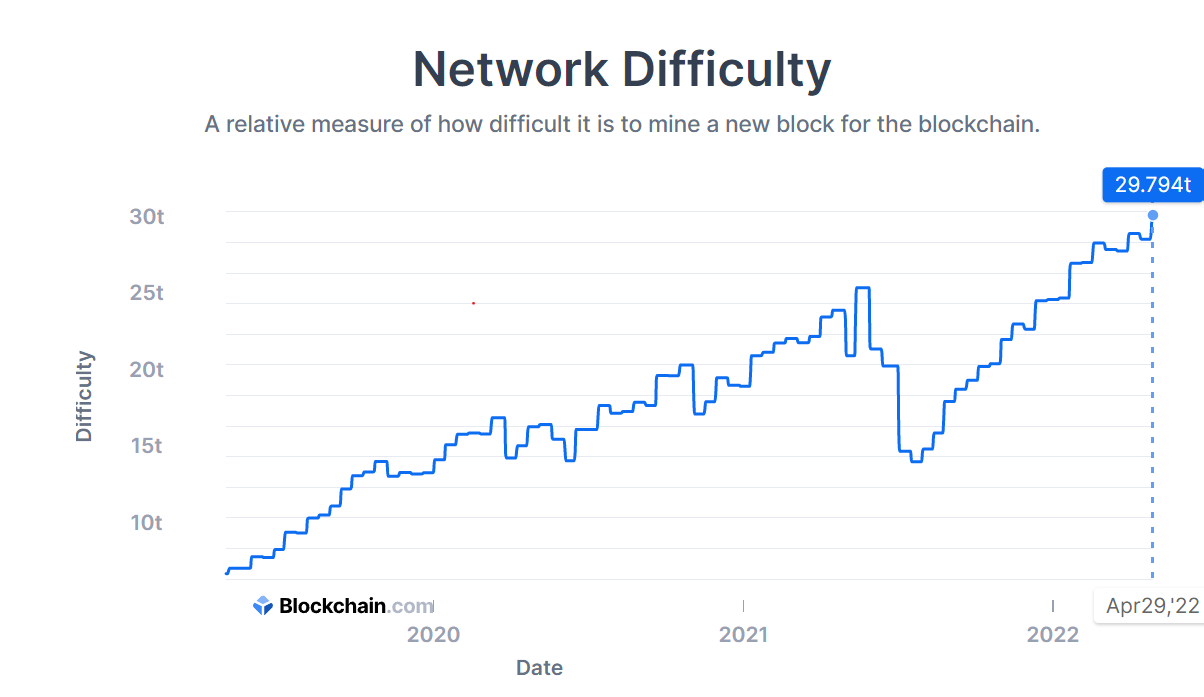 Fundamental indicators are equally encouraging on the side of Ethereum, the second-largest chain in terms of overall capitalization. The Eth2 deposit contract now holds 10% of the available ETH supply. Recall that all this Ether is no longer accessible to its holders, as the contract can only be unlocked after switching to the proof-of-stake consensus mode. This proof-of-stake contract on the Beacon chain has indeed reached a balance of 12 million ETH on Friday. The total locked-in value of Ether in the Eth2 contract is about $34.5 billion. Developers of the network began testing in December. However, the tentative merger date of June 2022 has been pushed back again, with no future date proposed at this time.

Twitter this week announced a partnership with payment processing company Stripe that will look to test a way for content creators to receive money in cryptocurrencies. The test will take place in 120 countries later this year and will feature Ethereum integration and compatibility with several virtual wallets. After receiving cryptocurrency payments, content creators will be able to choose to store the amount on the Polygon network or exchange it for another currency.

On Monday, FIFA secured the first new U.S. sponsor of the men’s World Cup in 11 years, signing a deal for this year’s tournament in Qatar with blockchain technology provider Algorand. It’s also a “technical partnership” to help FIFA develop a digital asset strategy, the world sports body said. It could help FIFA market non-fungible soccer-related tokens. The digital asset climbed nearly 20 percent in its ratio against bitcoin, before promptly losing most of that advance again.

Bitcoin appears to be in the final phase of a bear market characterized by undervaluation, suggests a popular technical analysis indicator. Bitcoin’s Mayer multiple, which is the ratio of the cryptocurrency’s price to the 200-day simple moving average, is slightly below 0.80. In other words, the cryptocurrency is trading at a nearly 20% discount to its 200-day simple moving average. Such a price structure has been relatively rare in bitcoin’s 11-year history, making the 0.80 reading on the Mayer multiple an undervaluation point. “We set a Mayer multiple of 0.8 as the historical level of undervaluation. The basis for this is that less than ~15% of bitcoin’s lifetime has been at, or below, this level, providing a more probabilistic view,” Glassnode analyst James Check wrote in a weekly analytical newsletter published Monday. It remains to be seen whether bearish pressure on the stock markets will continue to pull bitcoin down under these circumstances. 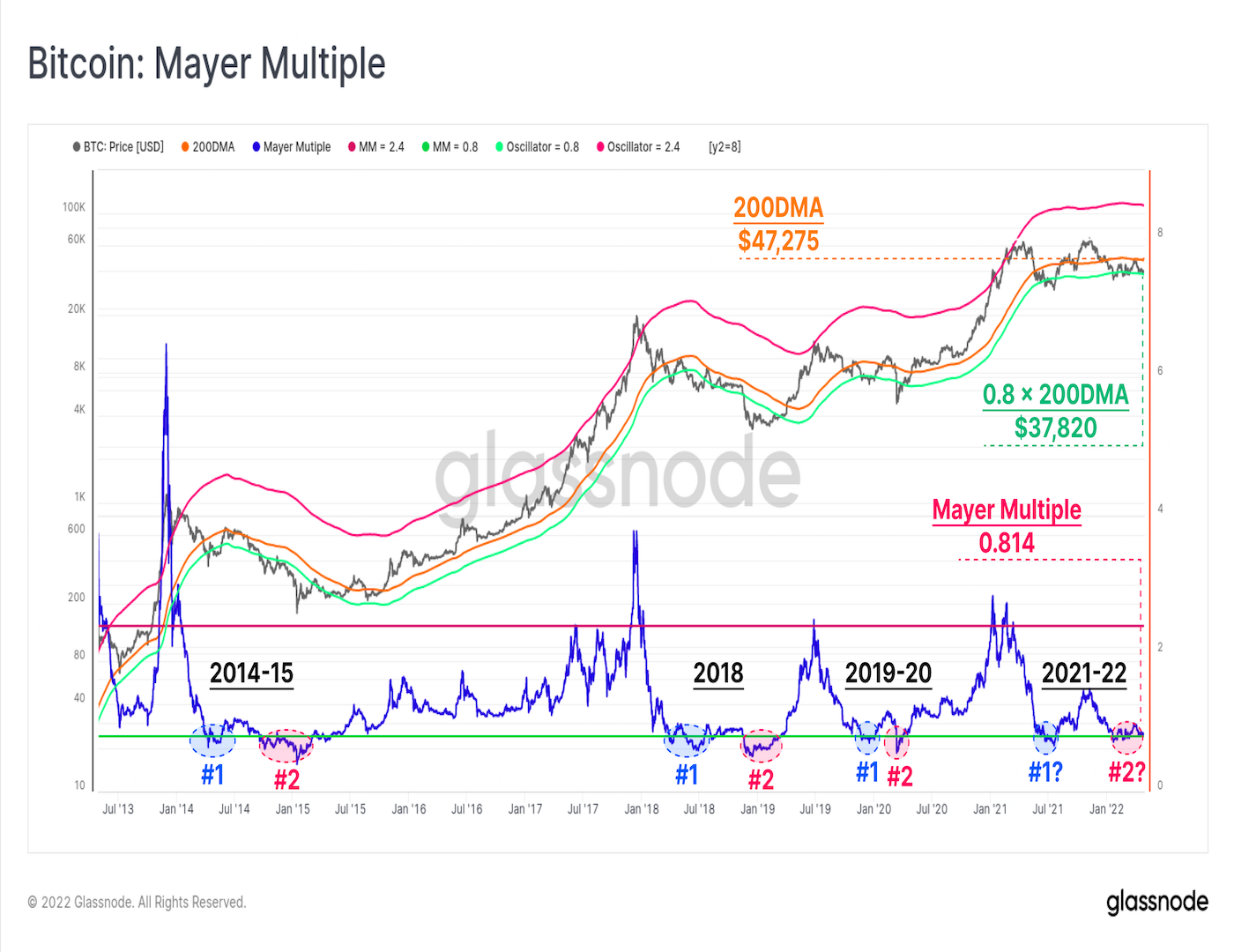 One thing is certain, despite the correlation to the NASDAQ index that has hit its low price of the year in recent days, bitcoin is showing definite resilience at its current trading levels. If the bullish push of the current cycle bringing BTC north of $100,000 has not manifested itself, so could a capitulation event be avoided. In short, a “rounding bottom” scenario could be in the works.

On the fund side, we continue to be defensive, at least until the effects of today’s Fed decisions are known.

The presented information is as of May 4th, 2022, unless otherwise indicated and is provided for information purposes only. The information comes from sources that we believe are reliable, but not guaranteed. This statement does not provide financial, legal or tax advice. Rivemont Investments are not responsible for any errors or omissions in the information or for any loss or damage suffered.