The main news that caught the attention of the markets this week was the purchase of Twitter by Elon Musk for $44 billion. If the deal goes through, it will take the social network out of the Wall Street world and back into the private sphere. Opinions of all kinds abound and vary greatly in their relevance. One thing is for sure, though: while only the future will tell what the company will look like under Musk’s reign, one promise has gone virtually unheard and is, in our eyes, the key point to remember. Musk promised to make the network’s algorithms open source, which, beyond future moderation policies, will allow for greater transparency and trust in the various messages conveyed. This is certainly reminiscent of the philosophy behind cryptocurrencies and general decentralization.

The CEO of Coinbase, never stingy with comments, actually applauded the announcement. “Elon buying Twitter is a great win for free speech, and probably changes the trajectory of the world more than most people realize” tweeted Brian Armstrong. “Twitter is upstream of media and culture in many ways, and it was trending in a very dangerous direction on censorship.”” He added that “hopefully twitter can be converted to a decentralized protocol over time, which would be the ultimate protection on it being co-opted again.”

Fresh news out of New York as the State Assembly just passed a two-year moratorium on cryptocurrency mining activities. While the bill does not propose an outright ban on mining, it would prevent mining companies from renewing their mining licenses if those operations are powered by fossil fuels. According to the bill, this also means that new permits would not be approved either. The goal would be to move the industry toward mandatory use of green energy to power it. The bill now faces a vote in the Senate.

Yet, in the environmental vein, it is encouraging to see that the global bitcoin mining industry has increased its sustainable energy mix by about 59% year-over-year. Indeed, the latest report from the Bitcoin Mining Council shows that the mining industry is rapidly adopting sustainable energy. The Council is a group of 44 bitcoin mining companies that claims to represent 50% of the global network, or 100.9 exahash (EH). It released a new report on Monday. According to the document, 64.6% of the energy used by the council’s members is eco-friendly, compared to 58.4% for the entire market.

The report was also quick to put the energy impact of the bitcoin mining industry in relation to other, particularly energy-intensive industries.

More American workers may soon be able to put some of their 401(k) retirement savings into bitcoin. Retirement giant Fidelity announced Tuesday that it has launched a way for workers to put a portion of their 401(k) savings and contributions directly into bitcoin, potentially up to 20 percent, all from the main menu of account investment options. Fidelity said it is the first company in the industry to allow such investments without having to go through a separate brokerage window, and that it has already recruited an employer that will add the offering to its plan later this year.

That company? MicroStrategy, who else!

We are this week halfway on the path to the next halving. Remember that every four years, the reward for finding a block as a miner is cut in half. At the time of writing, 733,806 blocks have been discovered in the history of the system. A halving occurs every 210,000 blocks. Therefore, we have passed the 50% mark between the 3rd and 4th halving in bitcoin history. Why does this matter? Simply because historically, with each cycle, bitcoin has risen sharply in price. The supply is getting thinner and thinner, with the amount of bitcoins left to be created steadily eroding. Recall that 19M of the 21M bitcoins that are to ever exist are already in circulation.

In fact, it was exactly 11 years ago yesterday that the mysterious creator of the protocol, Satoshi Nakamoto, sent his very last public message. Satoshi sent this message to Gavin Andresen, one of Bitcoin’s first developers, in response to Andresen talking about Satoshi in the media. ““I wish you would stop talking about me as a mysterious shadowy figure. The press just turns that into a pirate currency angle. Maybe instead make it about the open source project and give more credit to contributors. It helps motivate them.” A reminder that from the very first days, it was full and complete decentralization that was at the heart of the project.

Bitcoin as a protection against inflation? If the properties of the asset make it a near perfect vehicle, this reality is still slow to materialize. However, this does not prevent the various players from positioning themselves as such. 21Shares has just launched a new exchange-traded product composed of 81.5% gold and 18.5% BTC.  “Gold has historically delivered portfolio protection in inflationary environments while Bitcoin is the digital equivalent of gold,” ByteTree CEO Charlie Erith said, adding: “In a time of rising structural inflation and heightened geopolitical risk, we believe this can act as an important risk and return diversifier in a balanced portfolio.” 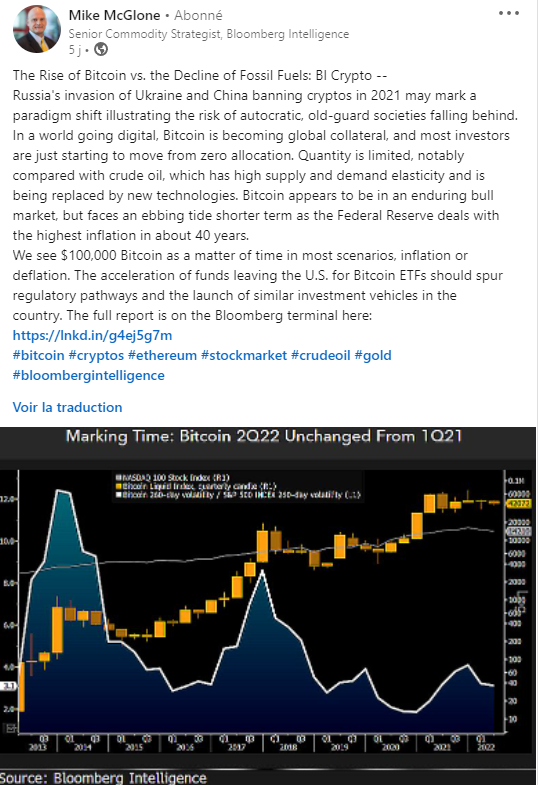 In the short term, however, the correlation between U.S. technology stocks and bitcoin is showing itself more clearly than ever. The 4% drop in the NASDAQ index yesterday once again pulled bitcoin down, this time below the $40,000 mark. In fact, we have initiated a move to a defensive position in the Fund. Indeed, while this correlation cannot be ignored, the NASDAQ is at an absolutely critical point technically speaking, and at its lowest level of the year. A new bearish wave seems plausible here. To this end, many analysts have long looked at the health of the so-called FAANG grouping, the five giants consisting of Facebook, Apple, Amazon, Netflix and Google. The latter missed its financial forecasts yesterday, after Facebook and Netflix had already done so previously. In short, all of these companies saw their prices break down, with only Amazon and Apple remaining out of correction territory. First quarter financial results for these two companies will be released tomorrow. In short, the market appears to be in a pivotal zone where more pain could be on the menu before a reversal. That’s not to mention the strength of the U.S. dollar – historically inversely correlated to the price of bitcoin – which is reaching levels not seen since the pandemic began in the spring of 2020.

The presented information is as of April 27th, 2022, unless otherwise indicated and is provided for information purposes only. The information comes from sources that we believe are reliable, but not guaranteed. This statement does not provide financial, legal or tax advice. Rivemont Investments are not responsible for any errors or omissions in the information or for any loss or damage suffered.