Tomorrow, Thursday April 14th, we will be holding our happy hour/conference with the Rivemont crypto strategy team. While all the tickets were sold out several days before the event, we have released another 20 in order to accommodate a maximum of participants. As a reminder, the free event will feature an hour-long conference focusing on the value proposition of cryptocurrencies, as well as the Rivemont Crypto Fund as an investment product. Hors d’oeuvres, drinks and networking will be on the agenda! If you want to join us at the Bonaventure Hotel in Montreal, don’t wait. Click here to reserve your spot.

Did we see insider trading in the cryptocurrency market yesterday? At least that’s the assumption made in the latest saga surrounding the industry. Indeed, hours after Coinbase published a blog post revealing the latest tokens being considered for addition to the exchange, Cobie, a crypto veteran on Twitter, pointed to an Ethereum wallet that bought over $400,000 worth of tokens on that same list. Crime money, cryptocurrencies? This is precisely another example of why the opposite is true. The user controlling the wallet, whose trading activity is publicly visible on the Ethereum chain, completed his token shopping three minutes before the list was made public. Moreover, the wallet holder appears to have focused only on tokens being considered for listing on Coinbase, suggesting advanced knowledge of the list before it was published. The tokens purchased by the wallet are now worth over $572,000, representing a 42% return on investment in less than 24 hours.

It didn’t take a commission or an investigation to spot the incident. All it took was attention to the chain’s public transactions. At the time of writing, Coinbase has not publicly addressed the situation. However, we can bet that there is a lot going on behind the curtain.

We recently reported on the partnership between the UFC organization and the Crypto.com exchange. As part of the latter, fighters will now receive their bonuses in bitcoin directly. The organization will distribute bitcoin payments to the top three fighters at each UFC pay-per-view event. Fan votes will determine the three fighters, and those selected will share a total of $60,000 in BTC.

Facebook whistleblower Frances Haugen warned that the Meta Metaverse will replicate “all the evils” of its social platform. In an interview with Politico, Haugen said, “They’ve made some very grandiose promises about how there’s security by design in the Metaverse. However, if they don’t commit to transparency, access, and other accountability measures, I can imagine a repeat of all the harm that we’re currently seeing on Facebook.” The woman who leaked thousands of internal documents to the SEC in 2021 adds, “I’m very concerned about the number of sensors involved. When we create the Metaverse, we’re going to have to put a lot more Facebook microphones and a lot more types of sensors in our homes. You don’t really have a choice anymore about whether or not you want Facebook to spy on you at home. We just have to trust the company to do the right thing.”

Speaking of Meta, we had to make sure of the date by reading this Yahoo Finance article to make sure it wasn’t an April Fool’s Day story. Indeed, after the fiasco that was the Diem project – ultimately nipped in the bud – a new digital currency would be in development by the company… the Zuck Buck (!). The goal would be to create a native transactional currency that can only be spent on Meta platforms. Unlike Diem, Zuck Bucks will likely not be cryptocurrencies built on the blockchain. Instead, according to the Financial Times, which cites people familiar with the project, Zuck Bucks would be controlled directly by Meta, much like the in-game currencies used in Fortnite and games on the Roblox platform.

Ethereum creator Vitalik Buterin has made a personal donation of $5 million in ETH to help Ukraine. Specifically, Buterin donated 750 Ether to Unchain Fund, a charitable project created by blockchain activists to support Ukraine with humanitarian aid. He also donated the same amount to Aid For Ukraine, an aid fund set up by the Ukrainian Ministry of Digital Transformation.

Speaking of ETH, the first “shadow fork” of Ethereum’s mainnet took place on Monday, in an additional step leading toward the transition from the proof-of-work to proof-of-stake consensus protocol. The shadow fork is a way to “stress test our assumptions around syncing and state growth,” tweeted Parithosh Jayanthi, an Ethereum Foundation developer, on April 10. He added that it will also provide “a way to check if our assumptions work on existing testnets and/or mainnet.”

The price of the majority of cryptocurrencies has slipped over the week. Despite this, the competition between miners is breaking new records. Bitcoin mining has become more difficult than ever in history. Each Bitcoin block now requires about 122.78 Zettahashes to solve. In other words, according to Glassnode, “this would be equivalent to the 7.938 billion people on Earth each guessing a SHA256 hash 15.500 billion times, every 10 minutes, to solve each Bitcoin block.”

The “Bitcoin 2022” conference was held April 6-9 in Miami. In reference to the bull on Wall Street highlighting the strength of bull markets, a similar bull, but specific to bitcoin, was unveiled. It’s impossible not to share this piece of art with you, which will hopefully be preserved in the city’s landscape. Of note, Cathie Wood of Ark Invest used the conference to reiterate her prediction that bitcoin would be worth a million dollars by 2030. 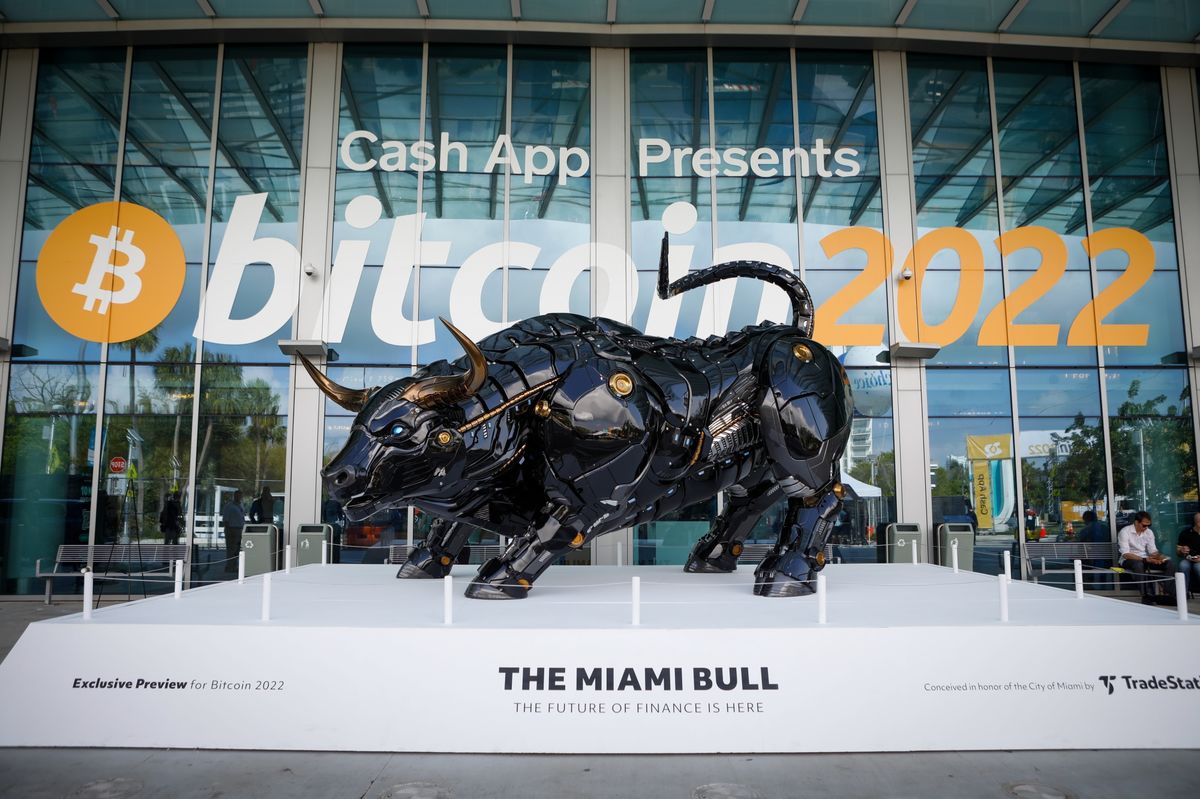 The story in the markets was the same as it has been for the past few weeks. Inflationary and geopolitical pressure created a new bearish wave on the stock markets. The correlation with bitcoin is still evident as the price has followed the trend. Nevertheless, not everyone was trying for an exit. According to the latest data observed, bitcoin whales have been busy buying new bids from sellers, with the Bitfinex exchange seeing some notable bid volumes filled.

Technically speaking, it is currently encouraging to see that the defense of the $40,000 level looks like it will hold. However, it is really around $38,000 that the real test lies should the slide continue. The consolidation rebound that began earlier this year must now reach this level so that it can technically continue in the short to medium term. 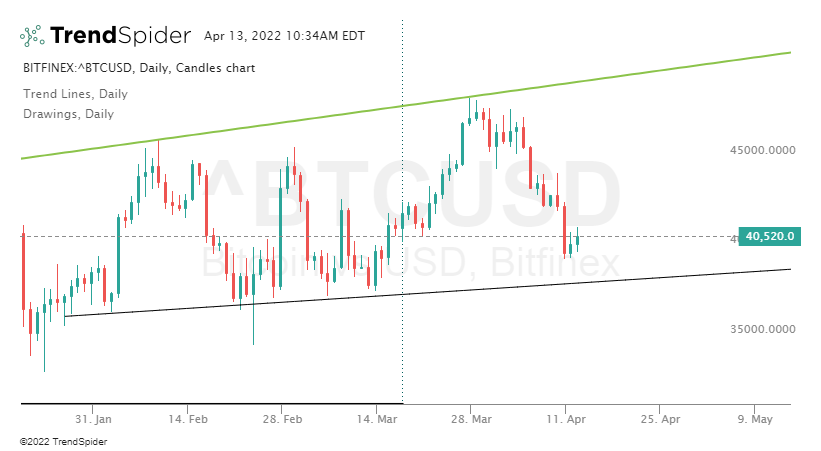 The presented information is as of April 13th, 2022, unless otherwise indicated and is provided for information purposes only. The information comes from sources that we believe are reliable, but not guaranteed. This statement does not provide financial, legal or tax advice. Rivemont Investments are not responsible for any errors or omissions in the information or for any loss or damage suffered.