Let’s start this week’s letter sharing an invitation. Rivemont is taking advantage of the arrival of spring to cordially invite you to a 5 to 7 event at the Bonaventure Hotel in Montreal on April 14. At the event, Rivemont’s crypto strategy team will present a conference entitled “Cryptocurrencies; a digital revolution”. The conference will be held mostly in French, but all questions and discussions in English are welcome, of course. A perfect occasion if you are wondering about the value of cryptocurrencies as a potential investment, or simply if you want to better understand what differentiates cryptocurrencies from traditional currencies. A great opportunity to network and ask our team the questions that are on your mind! Drinks and snacks will be offered. The event is free and seats are already going fast. To attend, simply register here.

Banking giant Goldman Sachs has announced that it has become the first U.S. banking institution to complete an over-the-counter crypto exchange with partner Galaxy Digital. The bank traded a bitcoin-related instrument called a non-deliverable option. The move is considered a notable step in the development of cryptocurrency markets for institutional investors. Compared to CME Group’s bitcoin products, the bank is taking on more risk this time around by acting as the principal in the transactions. “This trade represents the first step that banks have taken to offer direct, customizable exposures to the crypto market on behalf of their clients,” said Galaxy co-President Damien Vanderwilt.

U.S. Fed Chairman Jerome Powell addressed the topic of cryptocurrencies just this morning. The latter acknowledged that “We are well on our way to a world of instant, low cost payments”. Unsurprisingly, he added that unregulated digital activities would eventually become regulated. He said the Fed is already looking into the issue, adding that current laws were not written with cryptocurrencies in mind. He also reiterated that no decision has yet been made on a national digital currency, but that any plans to use one “must be able to verify a person’s identification and preserve privacy” as well as be “a widely accepted form of payment.”

Crypto.com has just been unveiled as a sponsor of the 2022 FIFA World Cup. The deal comes with a visibility exclusivity for a crypto platform at the tournament to be held in Qatar in the fall. Companies in the crypto industry have been snapping up sports sponsorships lately. Many of them were on display at the most recent Super Bowl. Last year, Crypto.com bought the naming rights to the LA Lakers’ stadium for hundreds of millions of dollars. In addition, Crypto.com has sponsorship deals with the Coppa Italia 2021, the NBA’s Philadelphia 76ers and Formula 1.

Thailand’s Exchange Commission announced that it will implement a ban on cryptocurrencies as a means of payment starting April 1st, 2022. In a statement released today, the regulator said that digital currencies could affect the stability of the financial system and pose risks to the country’s economy. This ban does not apply to cryptocurrencies used for investment purposes.

El Salvador has postponed its planned $1 billion bitcoin bond issue due to unfavorable market conditions announced the country’s finance minister yesterday. According to what Reuters reports, the launch was originally scheduled for March 15-20, but the war between Russia and Ukraine and its impact on the price of bitcoin led the government to change the date. These bonds will issue a coupon at 6.5% annual return. Still according to the minister, it is not the attractiveness of the product that is lacking. He says the bond will be “substantially oversubscribed” by up to $1.5 billion.

Non-fungible tokens continue to spill ink and dollars. Yuga Labs, owner of Bored Ape and CryptoPunk NFTs, just raised $450 million at a $4 billion valuation. On Friday, the company released a video promoting Otherside, a NFTs-based MMORPG game in which players can use their NFTs as playable characters.

While he says he doesn’t hate them, quite the opposite, Vitalik Buterin nevertheless issued a warning about the current craze. “The Goal Of Crypto Is Not To Play Games With Million Dollar Pictures Of Monkeys” He said in an interview with TIME magazine. “Crypto itself has a lot of dystopian potential if it’s implemented poorly,” Buterin said. “The peril is that you have these $3 million monkeys, and it becomes a different kind of game.” The Ethereum founder said many people buy yachts and lambos, but he hopes that in the future, cryptocurrencies will be used for fair voting systems, urban planning and universal basic income.

As if the universe wanted to offer him a glaring example of this, a collector made a careless mistake costing him over $1 million this week. DinoDealer claims that he intended to offer his “Ether Rock” for sale for 444 ETH, which is worth a whopping $1.2 million at today’s rates. Instead, he confused it with the smaller Ether denomination, meaning it was listed for sale on OpenSea at just 444 WEI. Before DinoDealer could realize his mistake, a bot grabbed the stone for just $0.0012 – and instantly began offering the NFT on the market for 234 ETH. If sold, it would make a nice profit of about $650,000. Another reminder that being your own bank comes with absolute responsibility for the trades undertaken!

Over $500 million worth of Ethereum was pulled from cryptocurrency exchanges earlier this week, with investors likely looking to hold onto their crypto in anticipation of bullish price action. IntoTheBlock, a cryptocurrency market research firm, revealed that 180,000 ETH were removed from exchanges on Tuesday. This figure represents the highest ETH withdrawal since October. This effectively decreases the supply of Ether available for purchase.

Despite global geopolitical events causing a wave of uncertainty in the markets, it is still the stock market that bitcoin is primarily correlated to. The 90-day correlation between bitcoin and Wall Street’s benchmark stock index, the S&P 500, reached 0.49 percent on Friday, the highest level since October 2020, according to data collected by Arcane Research. “Bitcoin’s correlation with the S&P 500 has only been higher for five days in the history of BTC, showing that the current correlation regime is unprecedented in the history of BTC.”

Technically, the price of bitcoin has hit highs not seen since at least the early days of March. Note, however, that it missed a close above the highs of the past two weeks, which would have been an encouraging signal for a continuation of the rebound. Confirmation of a 3 billion BTC purchase by the Terra Protocol to support the stable currency TerraUSD could help, especially since the co-founder confirmed that the majority of the amount remained to be purchased.

Analyst Matthew Hyland, meanwhile, believes the tide is turning for bitcoin, pointing to an ongoing attempt to break out of bitcoin’s daily relative strength index (RSI), among other things. 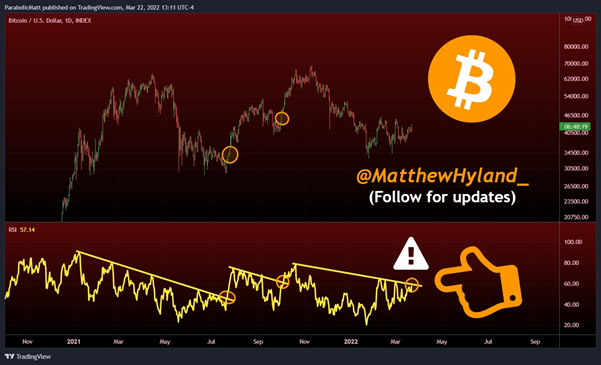 While the current trend is certainly encouraging, it is still the $45,400 mark that needs to be broken in order to officially break the long-term downtrend that began last November.

The fund remained fully invested during the week, with an overweight in ETH.

Please note that the author of these lines will be taking a week of vacation at the end of March. This weekly communication will therefore take a pause next week and return on April 6th.

The presented information is as of March 23rd, 2022, unless otherwise indicated and is provided for information purposes only. The information comes from sources that we believe are reliable, but not guaranteed. This statement does not provide financial, legal or tax advice. Rivemont Investments are not responsible for any errors or omissions in the information or for any loss or damage suffered.