Great news for the future of bitcoin in the European Union. We mentioned last week that a bill to regulate the cryptocurrency industry would be voted this Monday. After a day of debate by the Committee on Monetary and Economic Affairs, the organization ultimately rejected versions of the legislative package that contained what has been described as a “de facto” ban on the “proof-of-work” cryptocurrency mining used by Bitcoin and Ethereum, among others. It was a relatively close vote, with 32 rejections and 23 acceptances.

This rejected draft already included less aggressive language than the initial plan proposed on February 28th. The regulation project is not dead though. Indeed, all of this discussion is currently only about the language of the bill. In short, the content of MiCA is being negotiated before being voted on in the future. The agreed-upon language does, however, emphasize the importance of addressing the environmental impact of proof-of-work technology. As analyst Patrick Hansen notes, “MiCA regulates financial instruments and financial service providers. It makes way more sense to address any concerns around the sustainability of mining technology separately.”

Is bitcoin really a climate disaster? It certainly requires a lot of energy in order to operate. This is not a disadvantage, it is by design for the security of the network. The problem is not so much the method of consensus in itself, but rather the fact that it is the “dirty” energies that are currently the most economical to use. If green energy were to become both accessible and affordable, there is absolutely no doubt that miners would flock to make the transition. According to CoinShares data reported by the analysis firm Messari, bitcoin’s carbon emissions are not exaggerated when compared to the financial or gold industries: 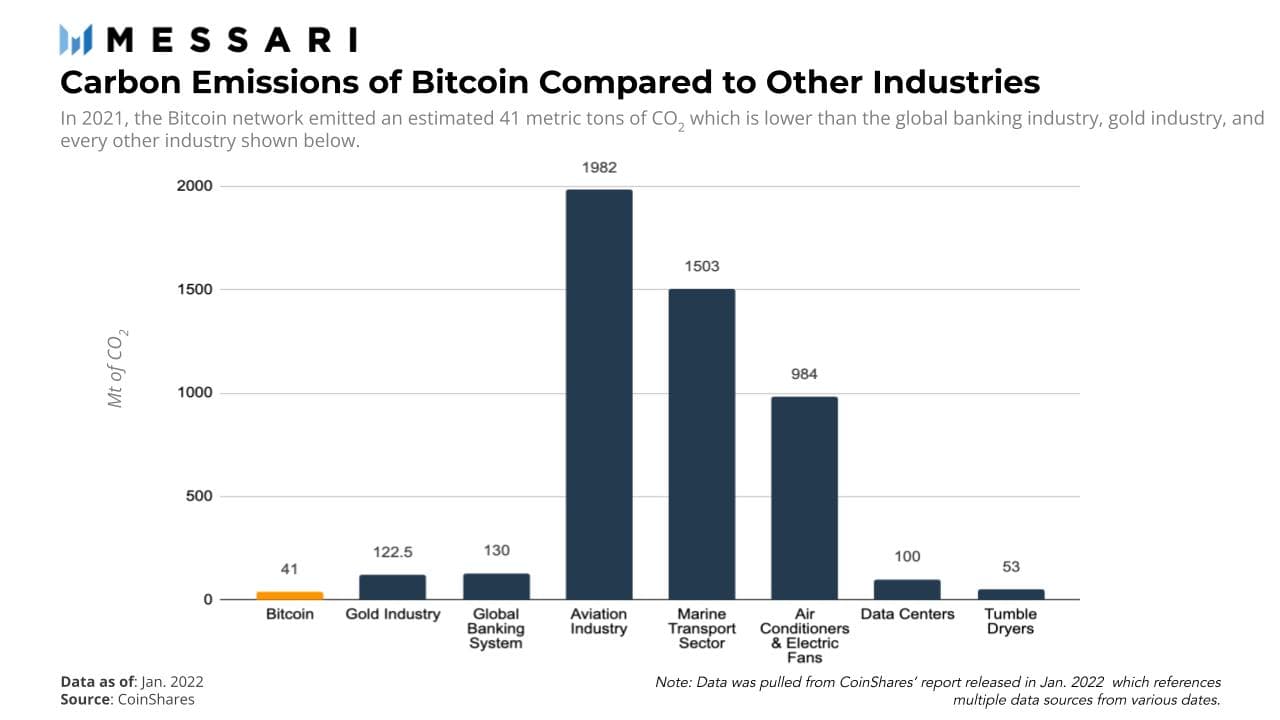 The war in Ukraine continues to dominate the news and weigh heavily on the markets. Cryptocurrencies in parallel continue to show their effectiveness for socio-funding campaigns in times when traditional financial exchanges are more complex than ever. It is now estimated that over $100M has been raised to help Ukraine in the face of the crisis. Almost all this money has already been spent. Alex Bornyakov, Ukrainian deputy minister in the Ministry of Digital Transformation and government spokesperson for cryptocurrencies, shared the details: 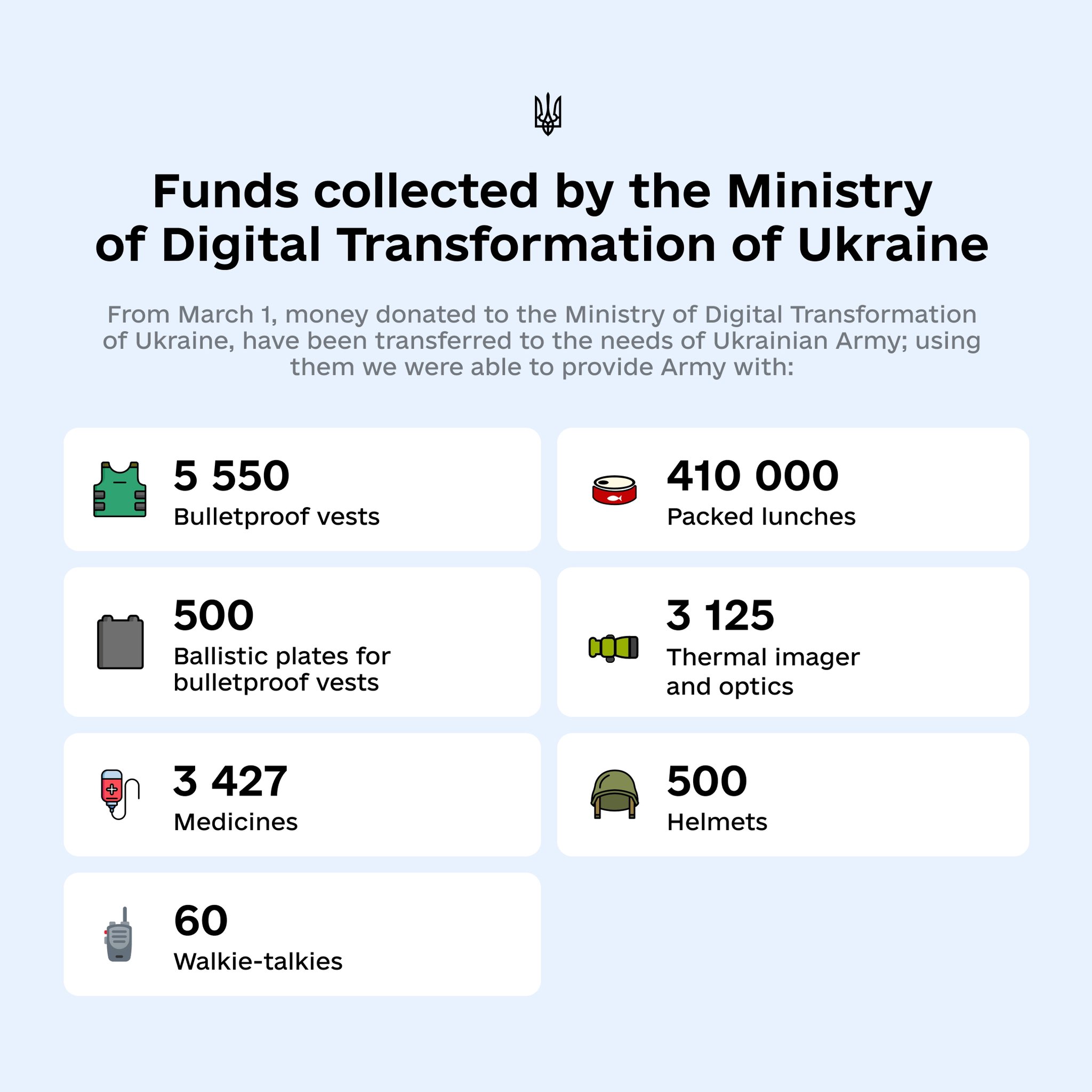 Cryptocurrency exchange Kraken is also adding a noteworthy contribution. Indeed, the latter is giving away $1,000 in BTC to any Ukrainian user. The gift can be withdrawn immediately and is intended to help those who had to be displaced as a result of the Russian invasion.

The transition of consensus mode from proof-of-work to proof-of-stake is coming fast for the Ethereum network. The latter merged onto the Kiln test network earlier this week in anticipation of the blockchain’s eventual move to a proof-of-stake network, with the network’s validators now producing post-merge blocks containing transactions. Kiln is expected to be the last merge test network created before the official upgrade. Application and tool developers, node operators, infrastructure providers and stakers are currently encouraged to test on Kiln. While the merge was largely successful, developer Tim Beiko reported that one client was not producing blocks and the issue is being investigated.

10M ETH are already locked into the future network’s staking contracts. At the current price, this means a value of over 26 billion US dollars. This historic figure was reached nearly 15 months after the ETH 2.0 contracts went live in November 2020. The ETH 2.0 deposit contract initially required 524,000 ethers to launch, but it was oversubscribed by more than 400% in the days leading up to its launch. Data shows that 67,040 unique depositors contributed to the upcoming network staking contract. The contributed ether is locked and inaccessible, but depositors earn a 4.81% annual return.

Non-fungible tokens will soon appear on Instagram announced Mark Zuckerberg. The CEO of Meta said he envisions users being able to make NFTs out of the clothes worn by their digital avatars (…). Rumors of this news have been hovering for months, with many predicting that users will be able to mint new NFTs on Instagram directly and share the ones that are already in their collection. The news seemed to trigger little reaction from investors. Meta’s shares closed up about 3 percent, similar to the sector’s gain for the same day.

The markets are now waiting the Fed’s decision this afternoon. While a quarter-point interest rate hike – a first since 2018 – is all but assured, it is the organization’s forecasts that will get the attention. Observers expect the central bank to come out with a new quarterly forecast that could indicate five or six more hikes this year.

What can we expect in terms of inflation over the next few years? That’s exactly the question Elon Musk asked this week, prompting a response from Michael Saylor. ” USD consumer inflation will continue near all time highs, and asset inflation will run at double the rate of consumer inflation. Weaker currencies will collapse, and the flight of capital from cash, debt, & value stocks to scarce property like #bitcoin will intensify.” Wrote the MicroStrategy CEO.  “It is not entirely unpredictable that you would reach that conclusion” Musk retorted, certainly half-smiling. Nonetheless, that opinion seems to be shared by the Tesla founder. Musk reaffirmed that he will not sell his holdings in bitcoin, ethereum and dogecoin.

At the time of writing, bitcoin has managed to climb back north of $40,000 after a week that can only be described as a clear period of consolidation. “There was a sharp jump in price from $39,200 to $41,700, followed by an almost equally rapid pullback to the area below $39,000. Stop orders were triggered in the illiquid morning market, but it’s clear that selling pressure remains enormous,” says Alex Kuptsikevich, market analyst at FXPro. Everyone is looking to the Fed’s speech to spur a move in either direction, as well as bring in liquidity in the process.

The presented information is as of March 16th, 2022, unless otherwise indicated and is provided for information purposes only. The information comes from sources that we believe are reliable, but not guaranteed. This statement does not provide financial, legal or tax advice. Rivemont Investments are not responsible for any errors or omissions in the information or for any loss or damage suffered.