A week ago today, Russia began its new invasion of Ukrainian territory, and the world responded with a multitude of economic sanctions. Banks are excluded from the global financial system, assets are frozen, foreign capital is no longer accessible, trade is restricted, and so on. All these measures are already having a major impact on the various economies involved in the conflict. Whenever there is tumult like this, cryptos find their place. This week’s letter will focus primarily on that topic.

First, let’s take stock of the situation. After the financial sanctions went into effect, the Russian currency, the ruble, collapsed by 30% against the US dollar. Russia has more than doubled its key interest rate in an attempt to stem the fall. Stock markets remain closed in a desperate attempt to slow the bleeding. Russian citizens are rushing to the banks to withdraw what little they are allowed.

In the space of a week, a another national currency seems set to collapse completely. Many citizens, completely uninvolved in the conflict and simply wanting to live their lives, are ruined.

This is another example, after the one repeated in recent weeks of the Ottawa trucking convoy, of the advantages of an uncensored currency. There are two sides to every coin, if we’re being fair. One thing is certain, however, that this almost obscure attribute of cryptocurrencies is now making clear objective sense. This is currently the case in Russia, for very polarized reasons. On the one hand, it provides an economic haven for citizens and a transfer of wealth beyond the country that is suddenly no longer accessible via conventional institutions. This is equally true on the side of the Ukrainian population. In particular, cryptocurrencies allow hundreds of thousands of refugees to bring some of their wealth with them. Digital currencies are also used for impressive direct social funding campaigns aimed at helping Ukrainians. On the flip side, it is true that cryptocurrencies can be used to circumvent sanctions imposed via these centralized financial vehicles.

Here’s what’s important to remember. Cryptocurrency is politically neutral and selfless. Its anti-censorship nature is just one attribute that differentiates it greatly from conventional currencies. The effect of this attribute, positive or negative, depends only on the human intention behind its use.

One thing is certain, this new safe-haven currency narrative – an angle that we deplored not materializing until a few weeks ago – is now driving a major market rally. Indeed, these assets cannot be seized, censored or inflated by governments and private companies, which makes them particularly attractive in times of conflict.  There is no doubt that the Ukrainian crisis plays a central role in this. Russian and Ukrainian trading volumes are soaring right now, with the USDTRUB pair hitting new all-time highs on Monday and Ukrainian BTC volumes seeing a sharp increase. Most importantly, cryptocurrencies have suddenly decoupled from their correlation with the US stock market, instead resuming a similar direction to gold. We talked about this cyclical value proposition duality in our letter last week. However, we didn’t think we would see it so soon!

Thousands of donors around the world are trying to help the Ukrainian people via cryptocurrencies. On February 24, the non-governmental organization “Come Back Alive” began its campaign (in blue). Inspired by the obvious success of the plan, the Ukrainian government itself (in yellow) has followed suit. As of yesterday, over $26M USD had been raised. 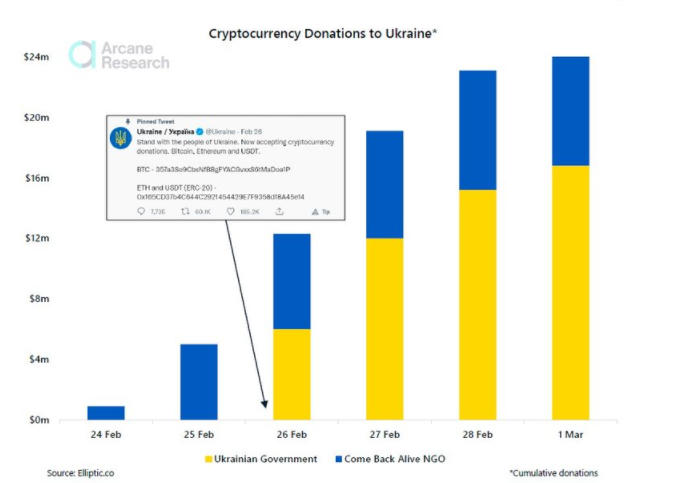 The founder behind the government campaign claims that $14M of the $26M has already been distributed. Michael Chobanian has been involved in the creation of two charitable funds to help Ukraine’s war effort and the war-affected population. The Crypto Fund of Ukraine, established two days ago, has been used primarily to purchase food, gas, medical supplies and firearms for civilians and to help evacuate people. The second wallet, which is coordinated by the Ministry of Digital Transformation, funds the military. Chobanian’s exchange platform helps the government convert crypto into fiat currency, as “the government doesn’t know how to properly manage crypto,” he himself said.

Need more proof of the wartime appeal of cryptos? As of yesterday, Russians were paying up to $20,000 more than the market rate to buy bitcoin. On some exchanges, the price to pay in rubles to acquire a bitcoin has actually surpassed its all-time high. 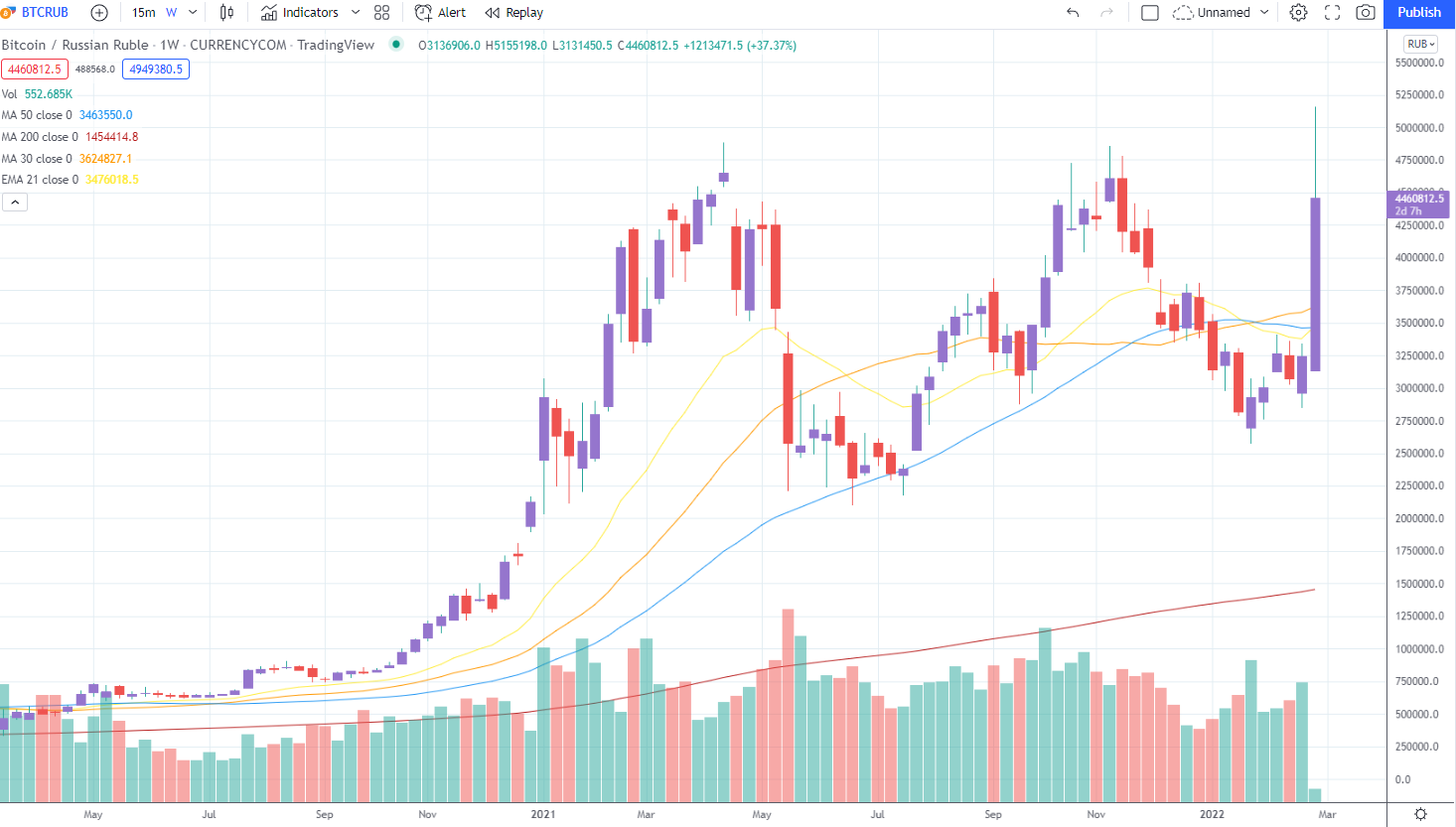 On the markets more specifically, it is worth noting that bitcoin has outperformed traditional assets for February – once again – despite particularly high volatility. 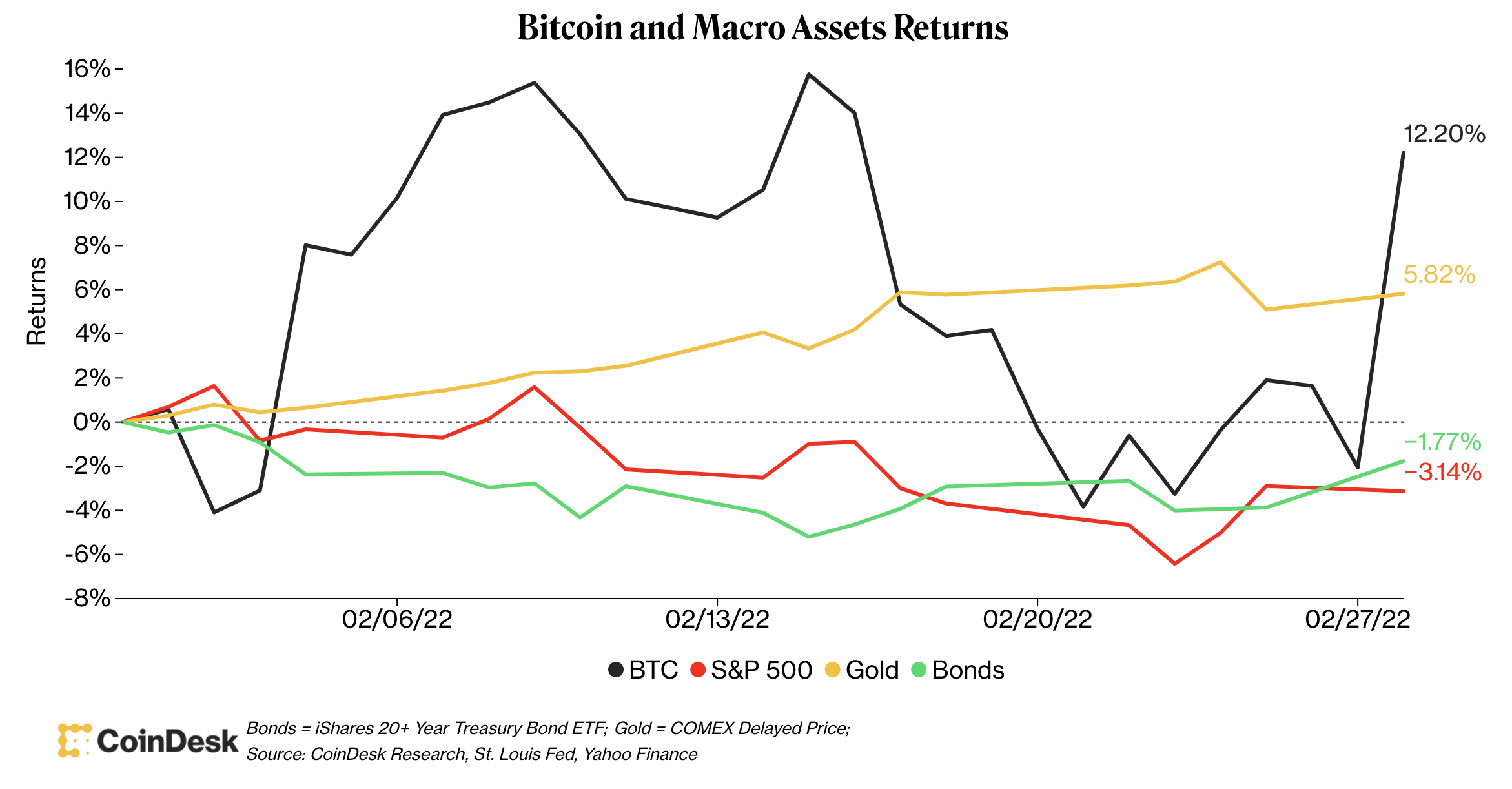 The war in Ukraine also coincides with bitcoin’s highest volume since early December. “Investors are speculating that crypto will become increasingly important apolitical and trustless money in a time of escalating geopolitical uncertainty, conflict, and capital controls. This speculation may have contributed to the 15% increase in the Bitcoin price over the past seven days.” wrote the analyst team at Arcane Research.

This surge over the past few days has, at least temporarily, helped the entire cryptocurrency market regain the $2 trillion capitalization mark. At the time of writing, however, we have fallen slightly below that line again. Bitcoin alone has a market capitalization of about $835 billion, incidentally greater than that of the Russian national currency.

Interesting new data on the blockchain, as Glassnode’s most recent report shows that the majority of buyers at the all-time highs have since resold. Indeed, more than half of the coins once purchased for around $60,000 have since been resold for around $35,000 to $38,000. At the same time, multiple indicators have shown that long-term holders hodl without flinching. Indeed, “despite a correction of more than 50% since the November highs, the majority of buyers who entered the market during the August-November rally have not liquidated their positions.” In short, the phase of redistribution from risk investors to long-term holders seems to be well and truly confirmed.

Technically, bitcoin has painted a clear double bottom, a generally bullish picture for the future. However, it would take a successful breakout and close above the $46,000 mark to officially confirm a trend reversal. The capital of the fund is currently fully invested.

The presented information is as of March 2nd, 2022, unless otherwise indicated and is provided for information purposes only. The information comes from sources that we believe are reliable, but not guaranteed. This statement does not provide financial, legal or tax advice. Rivemont Investments are not responsible for any errors or omissions in the information or for any loss or damage suffered.