The rebound of the beginning of the year has been halted by geopolitical uncertainties in recent days, with the increasingly tangible conflict between Russia and Ukraine putting downward pressure on both the stock and cryptocurrency markets. Only the energy sector seems to be on a real upswing under the circumstances. Since cryptocurrencies are themselves energy intensive, this is – in addition to simple uncertainty and impending interest rate hikes – a factor weighing on the digital token markets now.

The other asset that is doing well right now is gold. This is not a big surprise in the inflationary environment. But isn’t bitcoin digital gold? There was a time when the correlation between bitcoin and gold was strong, while stock market action seemed to have little impact. Now, as this CNBC analysis reports this morning, the data doesn’t lie. Despite the much higher volatility intrinsic to cryptocurrencies, the correlation for BTC is currently stronger with the S&P500 than gold: 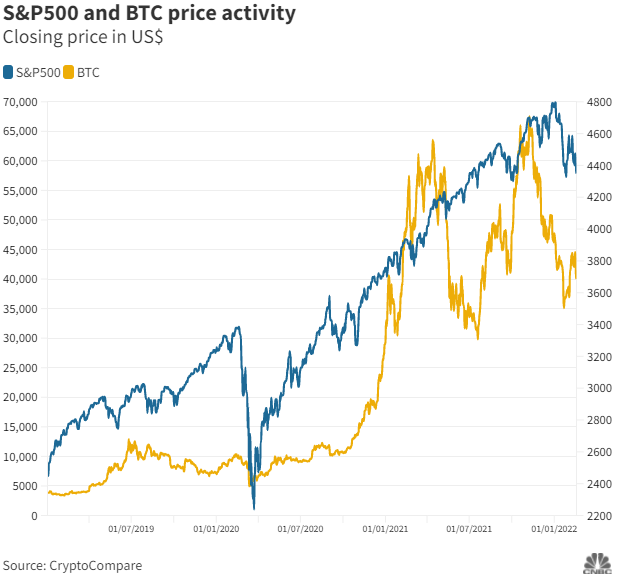 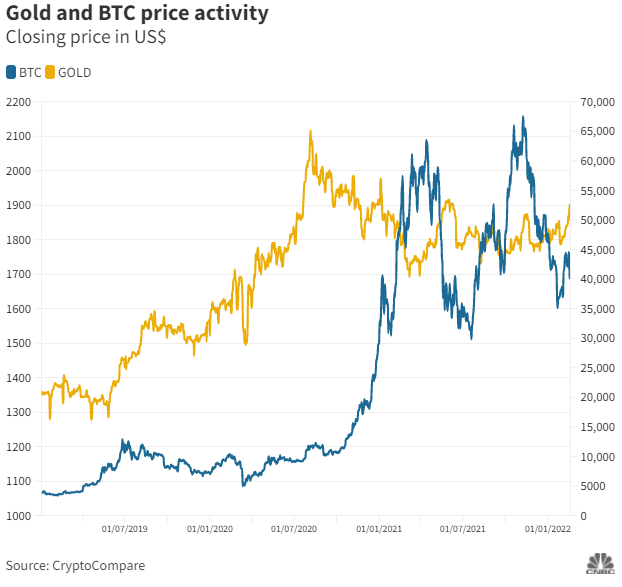 In short, as we’ve been saying for the past year, bitcoin is essentially acting as a risk asset rather than a hedge.

Does this mean we should throw the idea of digital gold out the window? While the above quote from CNBC suggests so, Rivemont does not share this view. Rather, we believe that the unique attributes of bitcoin make it a candidate for both of these seemingly opposite value propositions. While it is certainly the nature of a risk asset that currently prevails, we believe that this categorization would be cyclical rather than absolute. Need we remind you that we are still in the longest bull market in history and that it is natural that the appetite for risk is at its peak? Yet, bitcoin has generated the best returns in its risk-reward ratio this past decade.

Nevertheless, we know in parallel that the supply of available bitcoins being traded is steadily decreasing on the exchanges. Even institutions that have added bitcoins to their treasury are doing so with a long-term view. In short, at the same time, the amount of long-term holders, not thinking of selling either at the current level or at the level of six months ago, is increasing.

If these two scenarios continue to coexist, it is the first group that (temporarily) leaves the ship and puts downward pressure on prices. We can therefore assume that fewer and fewer bitcoins are being traded and moving the markets. The question is therefore where the level will be where risk investors will no longer have any reserves or selling interest, and where massive second group purchases will occur in a new accumulation phase. This is the level at which the supply shock we often talk about could manifest itself. It is also where the stock market correlation could be broken cleanly and allow bitcoin’s digital gold attributes to take over and generate returns, even in a possible stock bear market.

The Emergencies Act suggested by the Canadian government in connection with the trucks convoy that besieged Ottawa was officially passed on Monday. Despite the complexity of the matter, this law promises not only to freeze the bank accounts that funded the operation, but also to include the crypto wallets involved.

We’ve had our first example of how it’s more complex to go after decentralized accounts than traditional banks in recent days. The Ontario Superior Court sent an injunction to self-custodial bitcoin wallet firm Nunchuk, ordering it to freeze and disclose information about assets involved in the Freedom Convoy 2022 campaign. Now, the firm’s response may not sit well with the court. Nunchuk responded that it is “self-custodial, collaborative multi-sig Bitcoin wallet” and that it is a “software provider, not a custodial financial intermediary.” It adds that “We do not collect any user identification information beyond email addresses. We also do not hold any keys. Therefore, we cannot ‘freeze’ our users’ assets. We cannot ‘prevent’ them from being moved. We do not have knowledge of ‘the existence, nature, value, and location’ of our users’ assets. This is by design.”

Exactly. This is by design. This is a very tangible example of how the financial anti-censorship of cryptocurrencies is illustrated.

The 20 bitcoins collected in support of the convoy have in fact already left the receiving address of the fundraiser, in open defiance of the new law. Most of the 30 bitcoin wallets identified by the Royal Canadian Mounted Police as being linked to the fundraiser have also been largely emptied, with only 6 BTC combined remaining. This highlights the limits of a government’s ability to thwart transactions through decentralized, censorship-resistant systems. On the flip side, however, there is no assurance that these funds will land in the hands of the recipients desired by the donors.

Exactly one week ago, the RCMP ordered regulated firms to stop facilitating transactions in 34 portfolios. That same evening, some of those funds were distributed among unidentified parties and then sent to the centralized exchanges Coinbase and Crypto.com, according to blockchain data. An address connected to the Tallycoin fundraising address, which the truckers had used to accumulate funds, sent 14.28 BTC to 101 addresses in equal fractions of 0.14 BTC each. Here is a visualization shared by Crystal Blockchain. 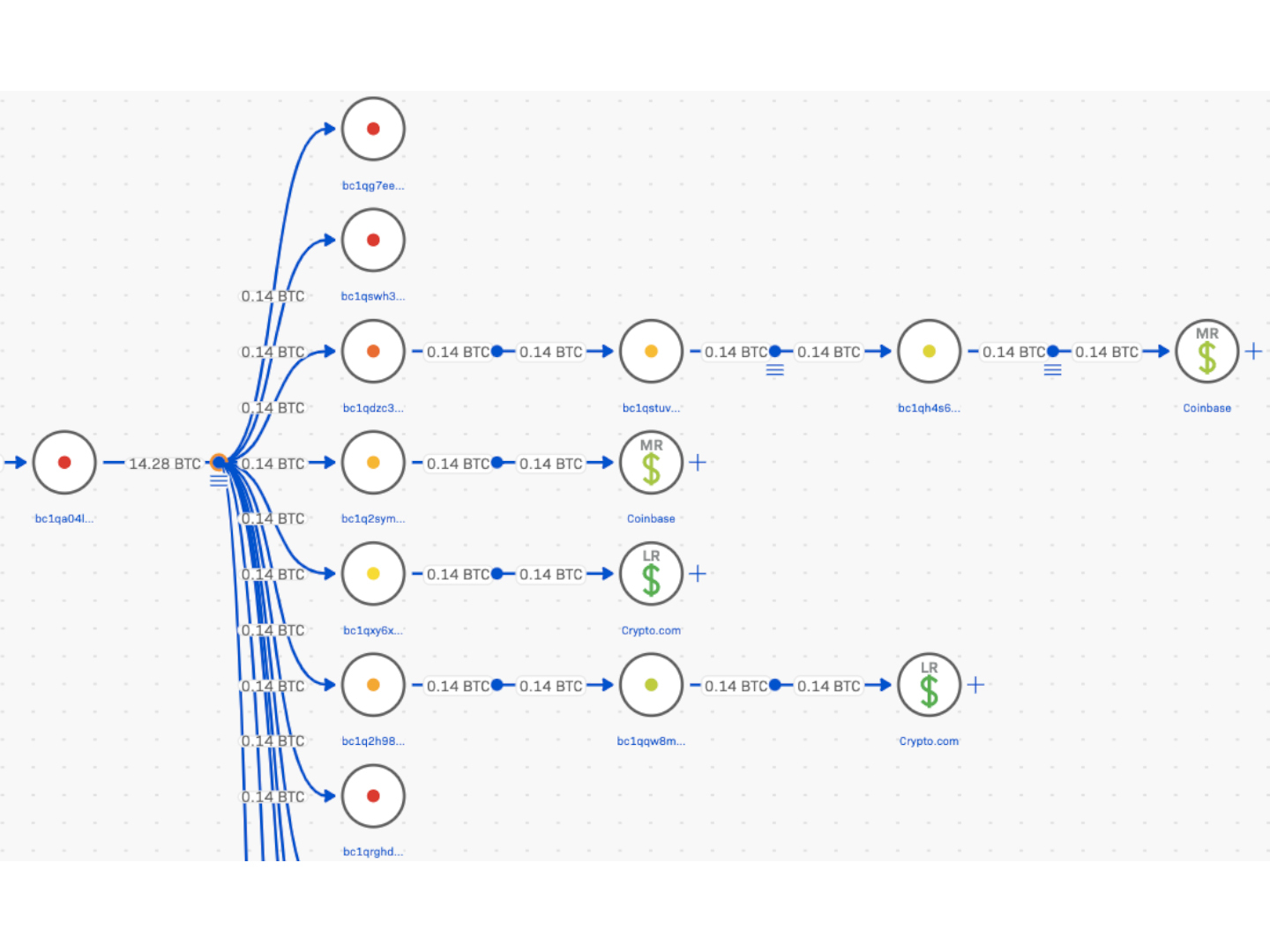 The Ontario Securities Commission contacted the Royal Canadian Mounted Police about tweets posted by the CEOs of Coinbase and Kraken exchanges this week. Brian Armstrong of Coinbase wrote, in part, in response to Minister of Finance Chrystia Freeland’s comments, “Concerning to see stuff like this happening in any country, especially such an economically free place like Canada. Self-custodial wallets are important!” Kraken’s Jesse Powell goes further, saying he’s sure authorities will target centralized exchanges (like his) to freeze funds, and then he would be forced to comply. 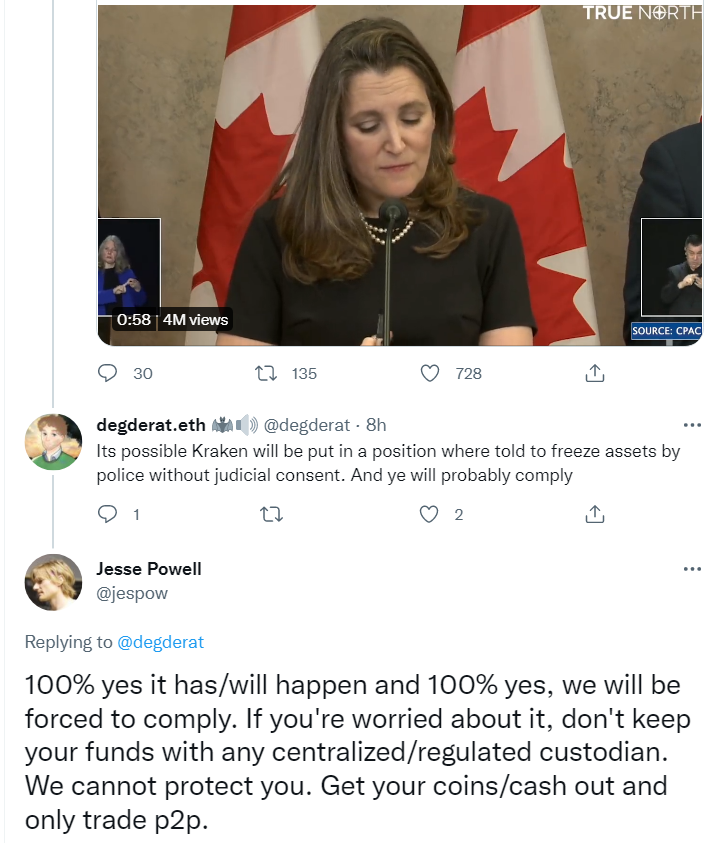 Vitalik Buterin, creator of Ethereum, also spoke out about what is happening in Canada. “If the truckers are blocking the roads and that’s breaking the economy, fine, blocking the roads is illegal and there are laws against that” he said in an interview with CoinDesk. “If the government is not willing to follow the laws … [and] give people a chance to defend themselves … and they just want to talk to the banks and basically cut out people’s financial livelihoods without due process, that is an example of the sort of thing that decentralized technology is there to make more difficult,” Buterin said. “In this way, crypto is not so much a radical technology as a restorative one. It’s not about being lawless. In some ways, it’s about bringing rule of law back. Governments and police can still act lawfully and pursue suspects “as they always have” without conscripting financial middlemen. This concept of going after intermediaries and using intermediaries to bypass all that, it is dangerous.”

In short, while Ottawa is now free of the truckers who laid siege, there is no doubt that the consequences of the Emergencies Act are just beginning to be felt.

We recently mentioned that India had just presented its plan to regulate cryptocurrencies, adding a gigantic 30% tax on gains made in the process. Now that the plan has been presented to the general public, here are the central elements that make it up, beyond the tax:

What represented price support last week appears to have turned into short-term resistance. Indeed, the market is finding its share of sellers at $39,500, while buyers are present around $36,500. Nevertheless, it has been encouraging not to draw a lower low than the last one of February 3rd. As such, there is still no technical indication that a retest of the lows hit in late January will be inevitable.

The presented information is as of February 23rd, 2022, unless otherwise indicated and is provided for information purposes only. The information comes from sources that we believe are reliable, but not guaranteed. This statement does not provide financial, legal or tax advice. Rivemont Investments are not responsible for any errors or omissions in the information or for any loss or damage suffered.