It was a positive week on the cryptocurrency markets, with a lot of encouraging news helping to improve overall sentiment, which in turn led to a continuation of the price rebound that began in the second half of January. While the various markets remain febrile on the cusp of a first interest rate hike in many years, we are out of the extreme fear wave of the turn of the year.

First came a real bombshell yesterday, as the U.S. Department of Justice announced the seizure of $3.6 billion in bitcoins from the Bitfinex exchange fraud of 2016. It was announced that a Manhattan couple had been arrested by authorities as a result. We’re not talking about just another operation here. In fact, this is the largest financial seizure in U.S. history. As Assistant Attorney General Lisa O. Monaco mentions, it goes to show “that cryptocurrencies are not a haven for criminals.”

“In a futile effort to maintain digital anonymity, the defendants laundered the stolen funds through a maze of cryptocurrency transactions,” Monaco said. “Thanks to the meticulous work of law enforcement, the department has once again shown how it can and will follow the money, no matter what form it takes.”

There are many reasons to welcome this news. In addition to the obvious justice intrinsic to this outcome, this seizure removes a sword of Damocles from the markets, as fraudsters no longer have the ability to massively and suddenly sell crypto assets and thereby suppress prices. Remember that Bitfinex had compensated users after the fraud. These seized bitcoins should therefore ultimately become their property again. However, without massive distribution to customers, the risk of a sudden sale leading to a drop in prices – which would harm the company in the process – appears to be quite slim. There is no doubt that it will take several years before these bitcoins can re-enter the market.

But that’s not all. Above all, there is a close collaboration between Bitfinex and the U.S. authorities in regard to this past fraud. This restores a good deal of confidence in the company behind Tether, the stablecoin pegged to the US dollar. The rise in bitcoin prices has often followed the issuance of new USDT tokens. Now, recently, fears of dollar reserves in order to support that same token have grown. These have at least temporarily subsided.

Finally, as mentioned by the prosecutor, there is tangible evidence that cryptocurrencies are not synonymous with money laundering, as many popular had previously suggested. Despite thousands of transactions seeking to lose track of the stolen bitcoins, authorities have instead been able to follow the money. As for how the funds were transferred, federal authorities say both parties used “numerous sophisticated laundering techniques.” These would include using fictitious identities to open online accounts, using computer programs to automate transactions, and depositing the stolen funds into accounts on several darknet exchanges and marketplaces – a process commonly known as “layering.” Nothing was enough. This sends a powerful message to the various financial players basing their reluctance towards cryptocurrencies on their alleged use by criminal organizations.

In other important news from our side of the border, the giant KPMG is adding Bitcoin and Ether to its corporate treasury. The move is the latest in a growing trend of large institutional players adding cryptocurrencies to their balance sheets, including MicroStrategy, Square and Tesla.  The Canadian arm of the accounting giant said in a statement Monday that the investment reflects their “belief that institutional adoption of cryptocurrencies and blockchain technology will continue to grow and become a regular part of the asset mix.” Of note, the company also announced that it was purchasing carbon credits in parallel to negate the environmental impact of this decision.

Unlike other companies that have taken this step, KPMG is not a primarily technology company where the marriage is more natural. KPMG is an Anglo-Dutch multinational and one of the “big four” accounting organizations, which include PricewaterhouseCoopers, Deloitte and Ernst & Young.

Still in Canada, it is without a doubt the convoy of truckers besieging the city of Ottawa that is in the news. If we have no political intention through this letter, the financing behind the initiative, on the other hand, holds our attention. Indeed, let’s recall that $10M had been raised via the GoFundMe platform. However, it was decided that this money would not be distributed, but rather refunded to donors.

Whatever one thinks of the decision in this particular situation, this is a blatant example of financial censorship when funds are managed centrally. Once again, bitcoin solves this. This is precisely how GoFundMe was bypassed, with 14.64 BTC raised this week in bitcoins directly. What we want to emphasize here is the concrete example embedded in our reality of what a censorship-resistant currency means. Centralized financial infrastructures are necessarily the target of political influence, possible repression or censorship. Cryptocurrencies, on the other hand, allow for true collaborative funding campaigns.

If Russia seemed to juggle with different ideas of regulation around cryptocurrencies these last few months, the national media are now announcing formal decisions. Indeed, the Russian government and the country’s central bank have reportedly reached an agreement on how to regulate bitcoin and other cryptocurrencies as part of a plan to recognize the digital assets as a form of currency. According to a document published on the official Russian government website Tuesday night, a bill is expected to be introduced by February 18th.

According to leaked information, the goal would be to recognize cryptocurrencies as a financial tool and consider them on par with any other foreign currency. “The circulation of these financial assets will be regulated by the state with strict obligations for all professional market participants and a focus on protecting the rights of ordinary investors,” the filing reads.

It was exactly one year ago yesterday that Tesla announced it had bought $1.5 billion in bitcoins. Today, the question deserves to be asked: aside from Tesla’s influence on the crypto markets, have the bitcoin purchases been beneficial to the company?

The short answer is yes. The long answer is hugely. In an annual report released Monday, it said that as of December 31st, Tesla had made $128 million in profits by selling some of the bitcoins it had purchased early last year, but it also recorded a $101 million loss on its position. While this may seem like a net gain of $27M, accounting rules make it more complex, but to Tesla’s advantage.  Specifically, these accounting rules mean that companies must record an impairment loss if the price of bitcoin falls below the purchase price, even if the price subsequently rises. However, even if the price explodes, a company cannot report a gain unless it sells the bitcoin. Tesla makes this clear in its 10-K report when it notes that the fair value of its bitcoins was nearly $2 billion as of December 31st, meaning the company’s bitcoin position has increased in value by about $500 million (and that’s in addition to the $128 million it earned by selling some last March).

“We continue adapting our investment strategy to meet our liquidity and risk objectives, such as investing in U.S. government and other marketable securities, digital assets and providing product related financing. In the first quarter of 2021, we invested an aggregate $1.50 billion in bitcoin. The fair market value of our bitcoin holdings as of December 31, 2021 was $1.99 billion. We believe in the long-term potential of digital assets both as an investment and also as a liquid alternative to cash.”

In a crucial accounting precedent, the IRS will refund taxes paid by a couple on gains made on staked cryptocurrencies. While the details of the story are anecdotal, what matters is the conclusion that any tokens gained through proof-of-stake should be considered “new property” created by the taxpayer—and therefore not income which “comes in” to the taxpayer. In order to be taxed, tokens gained through staking (or any other newly created property) must be first converted into a “readily accessible form of wealth”. Thus, until the tokens are sold, no taxable event has occurred.

Wells Fargo Investment Institute, the research division of Wells Fargo Wealth and Investment Management, has released a report highlighting the potential of cryptocurrencies as an investment opportunity comparable to the early days of the Internet. The latter believes that it is still early in the history of cryptocurrencies. So early, in fact, that there is no rush. But the adoption trend is clear. According to a July study by Crypto.com, the number of global cryptocurrency users has more than doubled from 100 million in January 2021 to 221 million in June.

“If this trend continues, cryptocurrencies could soon exit the early adoption phase and enter an inflection point of hyper-adoption, similar to other technologies,” said the report. “There is a point where adoption rates begin to rise and do not look back […] Precise numbers aside, there is no doubt that global cryptocurrency adoption is rising, and could soon hit a hyper-inflection point.” 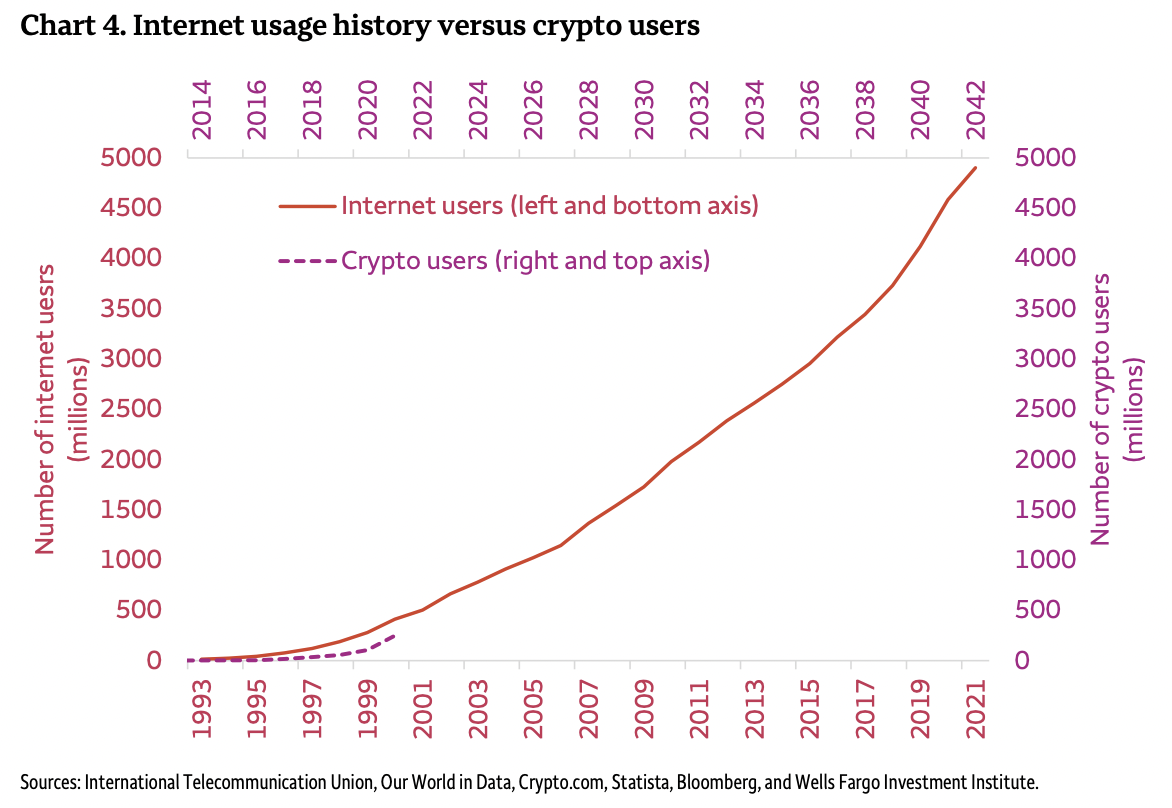 We mentioned just last week being cautious about deploying the fund’s capital. Technically, what motivated this positioning was the respect of a clear diagonal resistance on the one-hour chart since late 2021.

It was when this resistance was broken on Friday last week that the major price surge occurred. Since this was our entry signal, all the capital in the fund was deployed from this price level.

Technically, the picture is clear. Bitcoin will certainly try to use its 50-day moving average as support, which it did to the letter yesterday. Should it lose the latter in the face of short-term profit-taking, the 21-day exponential moving average, currently at $40,800, will be tested as resistance becoming support.

To the north, it will first need to retest and break through the $45,000 mark. This threshold is a former major support and was denied yesterday. If we were to close a day above this mark, then the path is clear towards $50,000, where the 200-day moving average currently stands.

The presented information is as of February 9th, 2022, unless otherwise indicated and is provided for information purposes only. The information comes from sources that we believe are reliable, but not guaranteed. This statement does not provide financial, legal or tax advice. Rivemont Investments are not responsible for any errors or omissions in the information or for any loss or damage suffered.