It has been a dark red week for the markets, both for the stock and cryptocurrencies’ markets. The correlation with risky assets has remained as clear as ever in recent days, but with the volatility that are known to cryptos. The fall was such that bitcoin lost more than 24% of its value in just five days, from the high of January 20 to the low of January 24.  Ethereum lost 34% during the same period, with altcoins also suffering more than bitcoin.

We told you last week that we were in caution mode. This positioning has definitely been beneficial for the fund’s investors, who only suffered a part of this decline. Our positions in altcoins, which have long been a sizable portion of the fund, were also virtually non-existent throughout the last seven days.

Are we in uncharted territory? Far from it. In fact, declines of more than 40% from the previous 90-day high, which is where bitcoin is now, have occurred 14 times since 2016. Each time, they will have translated as incredible opportunities to enter the market. The longest gap before revisiting the highs was the one initiated in January 2018, when it took almost three years to break the $20,000 mark. However, for the last eight times, it only took between 5.6 and 2.9 months to get there.

To put this in perspective, it is important to mention that we are also in the longest bull market in history, spanning the entire history of bitcoin. The stock markets are now in correction territory. So what comes next seems to hinge on two clear macro questions:
– Is the current stock market correction just that, or rather the beginning of a longer-term bear market?
– Will bitcoin decouple from its correlation to risky assets to act as a store of value, as it once did?

Part of the answer to the first question may find its first indicators today. Indeed, the U.S. Fed will be speaking again, potentially giving insight into how aggressive the organization is in its measures to counter inflation. Investors expect the Fed to indicate today that it plans to raise rates in March, tightening monetary policy for the first time since it reduced borrowing costs to near zero shortly after the COVID-19 pandemic began nearly two years ago. Analysts currently expect a total of four rate hikes this year as the central bank struggles to stem runaway inflation.

Is the correction of the past few weeks an adjustment that has now been made or will speculators continue to be predominantly sellers following the organization’s words? There is no doubt that the markets as a whole are on the lookout.

Bitcoin’s correlation with the NASDAQ couldn’t be clearer since the beginning of the year, being disappointing for anyone hoping for bitcoin to act as a hedge in an inflationary environment. Now, while some speculators are dumping their cryptos in times of uncertainty, we know that a large batch of them are in long-term hodl mode instead. So sooner or later, the correlation should run out of steam.  Analyst Will Clemente has been tracking this trend in particular. For the first time yesterday, the correlation temporarily turned negative. While it is very early to claim victory, this could suggest that bitcoin simply bottomed out earlier than the stock market.

One thing is certain, despite the current volatility, the supply shock seems sooner or later inevitable. Indeed, the illiquid supply of bitcoin, the amount of tokens not traded, stands at 14.5M. This is out of an outstanding supply of less than 19M. If these holders were to increase their wallets by 27%, there would be no tokens left available. While the hypothesis doesn’t make sense on its own, it does demonstrate how the growth of long-term Bitcoin holders leads to a supply that could eventually be so thin that the simple principle of supply and demand would be enough to cause prices to explode. 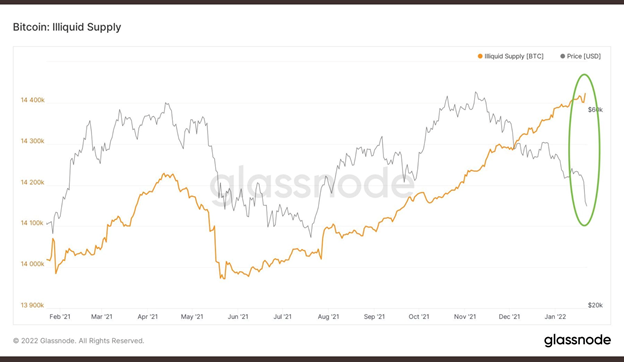 Anthony Scaramucci, founder of SkyBidge Capital and an avowed Bitcoin advocate, agreed this week in an interview on CNBC. “Take a chill pill, stay long Bitcoin, other cryptocurrencies like Algorand and Ethereum, and I think you’re going to be very well-served long-term in those investments,” the colorful investor said. “We’re getting ahead of ourselves. If it’s 2025, and there’s a billion Bitcoin wallets, let’s call it a currency. The dollar is still the dollar. To me, this is an emerging technology that will eventually evolve into a store of value as more and more people join the network,” Scaramucci added.

As evidence that bitcoin is indeed undermining traditional monetary structures, the International Monetary Fund yesterday again urged El Salvador to drop bitcoin as legal tender. In a statement, the Fund said it believed there were ”significant risks associated with its use for financial stability, financial integrity and consumer protection”. This is not a surprising position from the institution, but rather evidence that the influence of bitcoin can no longer be ignored.

Although “ignored” is possibly the most apt term to describe the reception of the notice by Nayib Bukele, the country’s president: 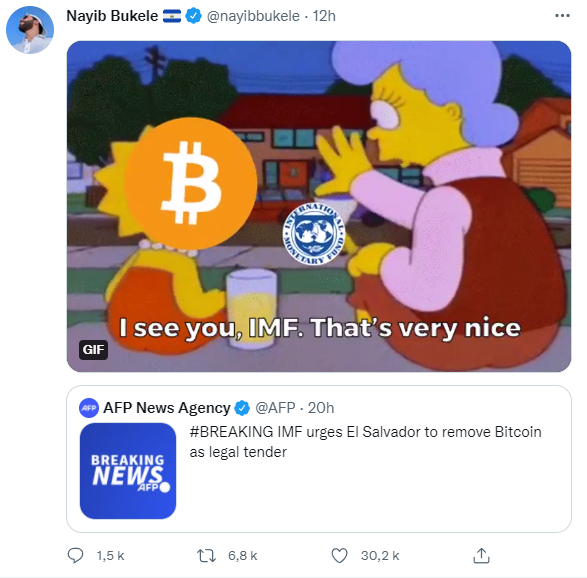 Bukele added about 1,800 BTC to the country’s treasury, and even bought 410 more on Monday as the market crashed.

We’ve been mentioning since the beginning of the year that market regulation is likely to be at the center of cryptocurrency news. It may not be long before this happens in the United States, with the Biden administration preparing an executive order to be issued as early as next month that will outline a comprehensive government strategy on cryptocurrencies and direct federal agencies to determine their risks and opportunities. According to Bloomberg, the directive would give the White House a central role in overseeing efforts to set policy and regulate digital assets.

When is Eth2 coming? If no one has a definite answer to that question, that’s not how it will be phrased from now on. That’s because the Ethereum Foundation has removed all references to “Eth1” and “Eth2” to call the original chain the “execution layer” and the enhanced proof-of-stake (PoS) chain the “consensus layer.” In a blog post Monday, the organization noted that Eth2’s branding failed to concisely capture what was happening on the network via its series of upgrades:

“One of the major problems with the Eth2 branding is that it creates a broken mental model for new Ethereum users. They intuitively think that Eth1 comes first and Eth2 comes after. Or that Eth1 ceases to exist once Eth2 exists. Neither of these is true. By removing the Eth2 terminology, we save all future users from navigating this confusing mental model,” the post adds.

Bitcoin has been aggressively bought as it approached $30,000 in recent days, as investors begin to absorb cash from short-term sellers. Data from CryptoQuant, which allows for observation of blockchain data, shows that starting in late December, bitcoin exchanges once again began to offload their BTC reserves. This is another indicator that pushes in the direction of an inevitable supply shock to come.

In the short term, we will have to see if the resistance at $38,000 can become support, in order to hopefully retest the $40,000 mark. However, an encouraging day does not break the trend, especially since this rise is in parallel with a joint rebound in US technology stocks. While we have taken back some positions during the rebound, caution remains the main guideline at this time.

The presented information is as of January 26th, 2022, unless otherwise indicated and is provided for information purposes only. The information comes from sources that we believe are reliable, but not guaranteed. This statement does not provide financial, legal or tax advice. Rivemont Investments are not responsible for any errors or omissions in the information or for any loss or damage suffered.