Monster deal in the tech world yesterday as Microsoft proceeds to buy video game giant Activision Blizzard for $68.7 billion. What does this have to do with this letter and the cryptocurrency universe in general? The justification given by Microsoft to justify this positioning certainly, the giant claiming that this is a transaction made in anticipation for the metaverse world.

What is this metaverse that we mention more and more? The metaverse is a term that describes a future vision of the Internet, in which users interact with avatars through shared 3D spaces. It’s a more immersive way to socialize, play and even work online. Blockchain technology and crypto assets (including NFTs) are expected to ground the mechanism behind this innovation as users move across interoperable platforms. The two most well-known decentralized metaverse platforms currently are certainly Decentraland and The Sandbox.

In a statement, Microsoft said the deal will provide “building blocks for the metaverse.” Chairman and CEO Satya Nadella added, “Gaming is the most dynamic and exciting category of entertainment on any platform today, and it will play a key role in the development of metaverse platforms.” Facebook is another tech giant with a strong interest in the metaverse, having actually changed its name this fall to Meta.

Restrictions versus innovation. Here’s a debate that will continue to spill ink as 2022 is seen as the year different regulations will be put in place around the cryptocurrency industry. Erik Thedéen, vice president of the European Securities and Markets Authority, is clearly on the side of extreme regulation. Indeed, he has just called for a ban on “proof-of-work” cryptocurrency mining due to the high energy requirements of this sector. “The solution is to ban proof-of-work. Proof-of-stake has a much lower energy profile,” Thedean said. “We need to have a discussion about moving the industry to more efficient technology. The financial industry and many large institutions are now active in the cryptocurrency markets, and they have [environmental, social and governance] responsibilities.”

Of course, as with every time such rhetoric is used, the objective ways in which a free and decentralized activity can be restricted, or how a regulatory authority can manage to change the consensus mode of a network without a central core, have been purposefully omitted.

Where some seek to restrict, others attack the problem through innovation. This is what Intel is currently attempting, about to unveil an “ultra-low voltage” bitcoin mining chip. The “Bonanza Mine” chip will be presented at the Solid-State Circuits technology conference in February. In December, when discussing the company’s gaming GPUs, General Manager Raja Koduri said, “I think blockchain is a transaction thing that can be executed much more efficiently than by burning hardware,” adding that it was “something we’re working on.”

Investment giant Fidelity, with $4.9 trillion under management, is clearly impacting the industry with its stances. It is therefore particularly encouraging to learn that Fidelity Investments Canada plans to allocate a small position to the Fidelity Bitcoin Advantage ETF in the Fidelity Simplified Growth ETF and Fidelity Simplified Balanced ETF and corresponding mutual funds, in order to increase diversification in these products and potentially improve future risk-adjusted returns. In short, bitcoin is definitely making its way into large, balanced mainstream funds.

In a recent paper, the firm commented on the future adoption of bitcoin around the world. It states, “History has shown capital flows to where it is treated best and embracing innovation leads to more wealth and prosperity. We also think there is very high stakes game theory at play here, whereby if bitcoin adoption increases, the countries that secure some bitcoin today will be better off competitively than their peers. Therefore, even if other countries do not believe in the investment thesis or adoption of bitcoin, they will be forced to acquire some as a form of insurance. In other words, a small cost can be paid today as a hedge compared to a potentially much larger cost years in the future. We therefore wouldn’t be surprised to see other sovereign nation states acquire bitcoin in 2022 and perhaps even see a central bank make an acquisition.”

Rio de Janeiro could be the next city to make this bet. In fact, Mayor Eduardo Paes is looking to place 1% of the city’s treasury in bitcoin. If he proceeds, the megacity will become the first Brazilian city to buy the leading cryptocurrency as a store of value. Paes said, “Rio de Janeiro has everything it takes to become the technology capital of South America. Events like Rio Innovation Week reinforce the city’s image as a great place to work, live and innovate.”

Interesting development on the side of cryptocurrencies pegged to national ones, as Circle’s USD Coin (USDC) reached a milestone by surpassing Tether (USDT) in terms of total supply on the Ethereum network. Tether had been the most popular stablecoin since at least 2016 on the chain. While USDT remains the most popular token with a total supply of 78.5 billion, nearly 50% of the supply, or 38.7 billion tokens, is on the Tron network. USDT can also be found on BSC, Solana, Huobi ECO Chain, Avalanche, Polygon, and 13 other chains or layer 2 solutions. The current total supply of USDT is 45.7 billion tokens across 21 chains or layer 2 chains. Doubts about Tether’s actual real dollar supply have led to a decline in its public image over the years.

On the price side, the correlation between the U.S. stock market and bitcoin is more evident than ever. According to a recent report from analytics firm Arcane Research, bitcoin’s 90-day correlation with the S&P 500 is currently at its highest level since October 2020, while U.S. trading hours show the most activity for BTC. For 2022, U.S. trading hours show a marked increase in trading volume, accounting for 43% of 24-hour volume on average. This is certainly a strong indication of the growing involvement of institutional players in the market.

But will this correlation persist over time? Not according to Bloomberg Intelligence analyst Mike McGlone, at least. According to McGlone, the hawkish policies of the U.S. Federal Reserve will lead to a 10-20% decline on the stock market. According to him, the same is true for bitcoin, not to say that this decline is already registered. “If you are long risk assets, you are fighting the Fed, and cryptos are the riskiest assets. The key thing, remember, is that bitcoin is the least risky of the cryptos.” As the Fed attempts to rein in inflation and significantly reduce its asset purchases, the outlook is therefore much less attractive for risky assets in the near term. For McGlone, however, there is a glimmer of hope regarding bitcoin’s inherent appeal. “I think bitcoin is moving from being a risk-on to a risk-off asset,” he continues, adding that he “thinks bitcoin will do better” after this period of economic turmoil.

While price volatility is low, the conditions could be right for a strong move to “clean up” margin positions. Indeed, open interest in bitcoin perpetual futures is at an “all-time high,” according to Glassnode. 5.7 million BTC, or 30 percent of the coins in circulation, are underwater, meaning they are worth less than what their owner paid for them. This is an important level from a historical and psychological perspective. Indeed, since May 2020, every time the percentage of bitcoin supply “in profit” has dipped near or below the 70% barrier, a rebound has followed. 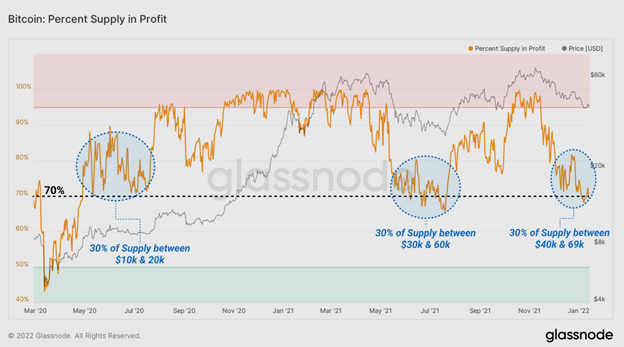 “The reaction from this level will likely provide insight into the medium-term direction of the bitcoin market,” reads this most recent analysis. “Further weakness could motivate those sellers in the red to capitulate, while a strong bullish impulse could offer much-needed psychological relief, and put more chips back into unrealized profit.”

In the current market conditions, especially with the obvious downward pressure on the market, the fund has moved back to a defensive position.

The presented information is as of January 19th, 2022, unless otherwise indicated and is provided for information purposes only. The information comes from sources that we believe are reliable, but not guaranteed. This statement does not provide financial, legal or tax advice. Rivemont Investments are not responsible for any errors or omissions in the information or for any loss or damage suffered.