“Wake me up when September ends” said the popular Green Day song. For crypto investors, the sentiment is possibly similar. September has indeed historically been a gloomy month for bitcoin and other high-cap cryptocurrencies. As the month draws to a close, it’s clear that 2021 has been no exception. However, if history tends to repeat itself, it is with great optimism that the 4th quarter is expected.

While the market seemed to be bouncing back from the concerns following the Evergrande real estate saga last week, this rally was stopped short on Friday by a new wave of concern emanating from China. China’s central bank announced that all cryptocurrency transactions were illegal, effectively banning digital tokens such as bitcoin. “Trading activities related to virtual currencies are illegal financial activities,” the People’s Bank of China said, warning that it “seriously endangers the safety of citizens’ assets.” It seems that China is making such speeches at least biannually. Nevertheless, the markets reacted negatively to the announcement.

However, this new jolt from China is not the beginning of a more serious crisis, quite the contrary. Getting China out of cryptos is possibly the best scenario for their future development. As Michael Saylor, CEO of Microstrategy, mentions, “nothing has created more wealth in the last ten years than technologies banned in China”. Think of the technology giants Facebook, Google, Netflix, Wikipedia, and so on…

As is often the case, it is towards American politics that fundamental analysts are likely to turn in the short term. Indeed, two crucial situations that could have a direct impact on the markets are looming. First, there is the vote on the $1.5 trillion infrastructure bill. The latter contains several anti-crypto provisions and could therefore make some investors fearful if it were to pass. If you follow US politics, however, you already know that nothing is less certain.

The U.S. government is also facing a possible shutdown if Congress fails to raise the national debt ceiling. Never before has this situation materialized. Nonetheless, a real political face-off is emerging on the subject, with the government at risk of defaulting on its $28 trillion debt if the ceiling is not raised by October 25th. This obviously leads various analysts to speculate on the consequences of such a hypothetical scenario.  “I think markets have been through enough of these limited episodes to have confidence that it’ll get resolved, but I think anxiety and volatility will creep in,” said Nancy Vanden Houten, lead economist at Oxford Economics. Bitcoin has at times responded well to weakness in the U.S. economy, such as last year, when the price rose fourfold while much business and consumer activity stalled. So, in that regard, another seismic market moment could give cryptocurrency a chance to prove itself as a hedge against the instability of U.S. government finances. Yet, there is currently an inverse correlation between the rising strength of the U.S. dollar and the price of bitcoin. Moreover, as we have repeatedly noted, bitcoin is currently reacting much more like a risk asset than a reserve asset. One thing is for sure, these are major themes to follow as we enter the next quarter.

Among the news that caught our attention this week, though we mentioned it was about to happen earlier this September, is that Twitter has officially launched the ability to share bitcoin tips on its network. “People will be able to add a bitcoin lightning wallet or their bitcoin address to send and receive bitcoin Tips beginning today,” explained Esther Crawford, Twitter’s product lead for creator monetization, on a Thursday press call. Crawford also spoke to Twitter’s interest in non-fungible tokens, and how they’re currently used on the platform. Many NFT owners use their NFTs as profile pics, and Twitter is looking into ways to formalize that practice. “We’re excited to soon explore NFT authentication,” she explained. “It’s a way to support creators making this art with a stamp to demonstrate authenticity. By allowing people to directly connect their crypto wallets, they can track and showcase their NFT ownership on Twitter.”

The 2nd largest pool of miners on the Ethereum network, SparkPool, this week suspended operations in the vein of Chinese attacks on the industry. The latter controlled 22% of the ETH network’s hash rate as recently as Monday. Launched in China in early 2018, the pool officially announced that it had suspended access to new users in mainland China on Monday, in response to new restrictive measures by Chinese authorities. Following the initial restrictions imposed last Friday, Sparkpool will continue to shut down its services and plans to suspend existing mining pool users in China and abroad on Thursday.

El Salvador yesterday shared a short video showing the development of a national bitcoin mine using volcanic geothermal energy. This is a clever response to the environmental criticism bitcoin faces. The video shows an overview of a power generation facility, with technicians activating cryptocurrency mining platforms. 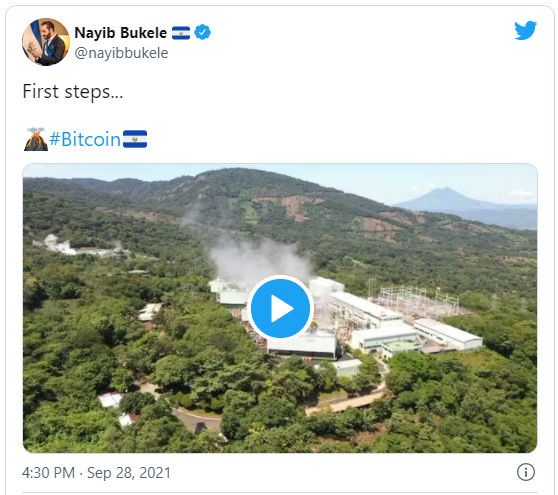 In his very first piece (French, subscription required) as a new columnist for Les Affaires, the firm’s president, Martin Lalonde, says that “cryptos have their place in a balanced portfolio.” Reading the comments of readers on social networks, one quickly notices that this suggestion is very polarized, being mostly rejected by the older generations. However, it seems that the financial community is turning to this emerging market with full steam. Indeed, institutional investors are increasingly looking to move into cryptocurrency investment to grow their revenues in the long term, a new survey revealed. As many as 62% of global institutional investors with zero exposure to cryptocurrencies like Bitcoin said they expect to make their first investments in cryptocurrencies within the next year, according to a new survey by European investment manager Nickel Digital Asset Management. According to the survey results, the main reason for institutional investors’ first cryptocurrency investment is the potential capital increase in the long term, with 47% of respondents citing this factor. Forty-four percent of respondents cited growing confidence in crypto as an asset class.

The technical picture is particularly simple and clear right now, with strong support at $40,000 and equally strong resistance at $45,000. A period of consolidation in this area in the short term therefore seems quite plausible. Any move north of this channel, however, could be explosive. Indeed, as we mentioned at the beginning of this letter, if September is historically a month of correction, the same cannot be said about the end of the year. Need we remind you, in particular, of the rise in the price of bitcoin from $4,000 to $20,000 in Q4 2017? Moreover, if we analyze bitcoin cycles in four-year periods representing halvings, such a surge appears quite plausible and in line with models like the popular Stock to Flow. This is particularly the view of long-time crypto investor Bobby Lee. In an interview with Bloomberg today, he believes that despite the low prices of the past month, bitcoin can not only regain its current all-time highs, but also reach $100,000 or $200,000 or more.

This, Lee suggested, should come — or at least begin — before 2021 is out. “I think you’ll easily go over $100,000, and then depending on how sharp the rally is, it’s also likely to touch $200,000 or even go above that,” he said. “Obviously, going above $200,000 is a huge milestone, so there’ll be a lot of media coverage, and that’s what leads to what they call a ‘fear of missing out’ rally. Generally, that happens every few years, and I think a FOMO rally for Bitcoin has been due for a long time now.”

We conclude this communication by sharing this interesting video that circulated on the web this week. It represents, visually, the development of bitcoin in 60 seconds. In it, each of the circles represents a file or directory in a source code collection. The little heads of people are people making changes to the network. The cluster between them is a change. A green change is an addition, a red change is a deletion. 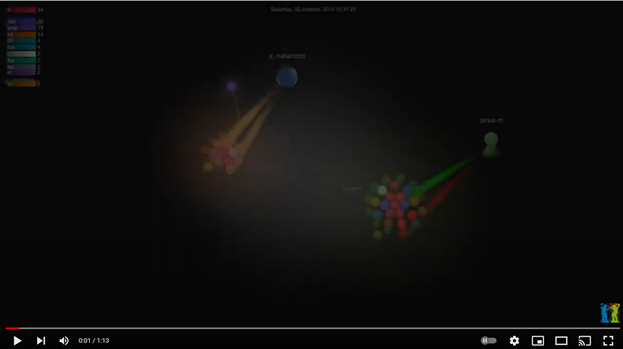 The presented information is as of September 29th, 2021, unless otherwise indicated and is provided for information purposes only. The information comes from sources that we believe are reliable, but not guaranteed. This statement does not provide financial, legal or tax advice. Rivemont Investments are not responsible for any errors or omissions in the information or for any loss or damage suffered.

What accounts for Ethereum’s rise? Without a doubt, its success in moving from a simple speculative asset to its true calling, a high-utility asset with commensurate adoption.

Let’s kick off this communication with some big news – another one – for the Rivemont Crypto Fund. After announcing on Monday that the Fund was now available for distribution through the advisors of the financial services firm MICA, we can now confirm that after several years of work towards this goal, we have obtained the authorization to trade a multitude of additional cryptocurrencies. Indeed, all tokens available for custody and trading with our partners, as long as they fit the mission of the Fund following a favorable internal due diligence, can now be held in the Fund. This gives us access to over 50 potential cryptocurrencies.