September 7th, 2021 was to be a historic day in the history of bitcoin. For the very first time in its short life, a country adopted it as legal tender. Against the opinion of the International Monetary Fund, as well as the majority of the population, El Salvador is now forcing all businesses to accept payments in Bitcoin. For many investors in the industry however, it was the sudden steep drop in prices, erasing the week’s gains in a matter of moments, which rather marked this historic day. Let’s take a look at these two central stories from Tuesday.

Were the citizens of El Salvador celebrating yesterday’s monetary change? While no one was complaining about the $30 gift of bitcoins received from the government, the excitement generally ended up there. Indeed, while the government was vocal on the international stage about its intentions, it seems that the population was anything but ready to adequately make the transition. This is not a closure to the acceptance of cryptocurrencies per se, but rather the lack of education on how such payments can now be accepted. While the large chains seemed mostly ready, many smaller merchants are still in the dark about the technological challenge of this revolution.

It must be said that the day did not go smoothly, far from it. In addition to the 10% drop in the price of bitcoin in parallel, some technical difficulties have been observed. The official government wallet, nicknamed the Chivo Wallet, wasn’t available on the Google Play Store. Those who managed to install it through different channels discovered yesterday that it had stopped working for a while. It was explained as a simple server update, but the mere fact that the government has such central control over the wallets of merchants and citizens is enough to make even the most purist shudder.

Information about the legal requirements for accepting and using bitcoin was sparse and unclear. In an interview, the legal adviser of the presidential chamber, Javier Argueta, clarified the meaning of yesterday’s change. The latter stressed that it is mandatory for companies “to have the electronic wallet” to receive bitcoins. However, “in the transaction […] you have the choice to receive bitcoins or automatically convert them to dollars, and that’s why it’s voluntary.”

The official added that businesses that refuse to accept BTC are acting in violation of local regulations. According to Argueta, all businesses are obliged to make the transaction in Bitcoin and despite the fact that neither the law nor the regulations clearly state it, if the business does not accept it, it is exposed to referrals of infractions to the Consumer Protection Law.

Were these technical problems the reason for yesterday’s price drop? Certainly not by themselves. Certainly, there is an argument to be made that this legislative change may have been the spark for the correction. Indeed, the markets had seemed particularly encouraged over the weekend, with Salvadoran President Nayib Bukele announcing the purchase of an additional 200 BTC for the national reserve. In addition, the media was trumpeting September 7th as National Bitcoin Day, encouraging any investor to add $30 worth of bitcoins to their wallet (corresponding to the $30 given to each Salvadoran citizen in cryptocurrency). In short, the sentiment was particularly positive, perhaps even a bit too much so.

Thus, it was more of a classic “buy the rumor, sell the news” example that seems to have occurred. With such polarized positive sentiment, many investors likely felt comfortable using leverage to make the most of any price surge. So it wasn’t panic that created such a drastic drop yesterday, but another “long squeeze” like we often see on the market. In short, at certain price levels during the decline, many investors were faced with margin calls, forcing them to automatically sell at the spot price, as they no longer had the capital to support their margin position. This of course creates additional selling, driving the price down, which creates a cascade of margin calls at lower levels, and so on. That’s why the price dropped to about $43,000 and then quickly recovered to between $46,000 and $47,000.

In the space of one hour, 3.22 billion long positions were liquidated. A harsh reminder to many of the risks of using leverage!

For what it’s worth, President Buleke immediately tweeted that he had “bought the dip” for an additional 150 BTC, laughing that the discounts were disappearing quickly. He added that the country’s reserve of bitcoins now stands at 550 BTC. 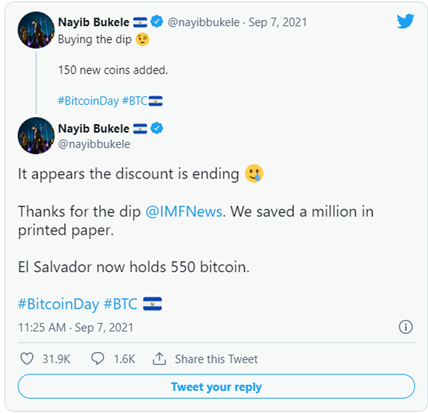 Will El Salvador be an isolated experiment or will other countries follow the lead? A new bill introduced in Panama suggests this second scenario. Indeed, the country took advantage of yesterday’s events to present an initiative seeking to make the country compatible with cryptocurrencies and blockchain. Congressman Gabriel Silva stressed that the new legal initiative has the potential to generate thousands of jobs, create new investment sources, as well as make the government “more transparent.”

According to the draft bill document shared by Silva, the new legislation intends to recognize crypto assets like Bitcoin as an alternative global payment method for “any civil or commercial operation not prohibited by the legal system of the Republic of Panama.” The bill authors emphasized that cryptocurrencies enable fast and low-cost payments allowing them to finalize a financial transaction “regardless of the distance between parties and the transaction volume.” However, unlike El Salvador, acceptance of bitcoin would remain optional rather than mandatory.

Coinbase announced earlier this summer that it would offer 4% returns to investors holding stablecoins in their platform wallets. In an unexpected turn of events, the SEC just warned the company that it plans to sue them if it goes ahead with this proposal. In response to the SEC’s legal threat, Coinbase CEO Brian Armstrong lashed out at the agency on Twitter, complaining that his company had attempted to do the right thing, but that the SEC has failed to be transparent about its crypto policies, and is instead “engaging in intimidation tactics behind closed doors.”

The company’s stock opened lower this morning following this news.

So what does yesterday’s action tell us about the markets? As is often the case, it is likely that those who panicked and sold will be on the wrong side of the equation. Indeed, despite the correction, the price is currently at the level of… a week ago. Nothing abnormal or particularly worrisome! By the way, yesterday’s decline also paralleled a decline in gold, which could be a consequence of the resurgence of the U.S. dollar. The decline in bitcoin and gold occurred at about the same time as a surge in the U.S. dollar index. 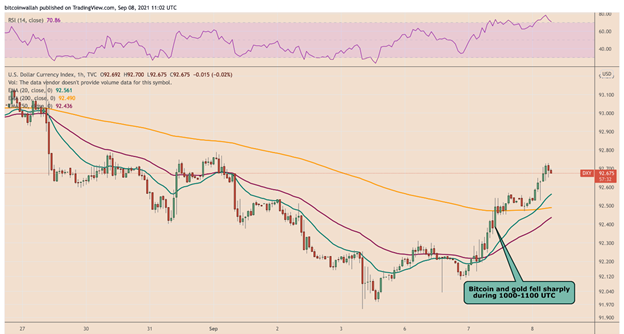 Technically, the important 200-day moving average continues to offer support, while the 50-day moving average has twice rather than once served as a real springboard in the past 24 hours. The RSI oscillator on the four-hour chart is at its lowest since August 6th, which could help to keep the current supports intact for a consolidation to follow.

Corrections like yesterday’s are common and have nothing to change analysts’ predictions. To that end, Mike McGlone, senior commodity strategist at Bloomberg, reiterated his call for a six-figure bitcoin, saying the first-ever cryptocurrency is well on its way to becoming a global reserve asset that complements the U.S. dollar. “Crypto-assets appear in a revived and refreshed bull market” McGlone wrote, referring to the second half of 2021. He said portfolios lacking BTC or ETH exposure are “naked,” as evidenced by the relative underperformance of gold and government bonds:

“Portfolios of some combination of gold and bonds appear increasingly naked without some Bitcoin and Ethereum joining the mix. A macro risk-off decline is a primary threat for the crypto bull market.”

A new cryptocurrency research team at Standard Chartered has predicted bitcoin will double in value and hit $100,000 by early next year and that it could be worth as much as $175,000 longer-term. The bank also said it “structurally” valued Ethereum, the second-most traded crypto asset, at $26,000-$35,000 although to reach that level bitcoin would have to be near $175,000.

The presented information is as of September 8th, 2021, unless otherwise indicated and is provided for information purposes only. The information comes from sources that we believe are reliable, but not guaranteed. This statement does not provide financial, legal or tax advice. Rivemont Investments are not responsible for any errors or omissions in the information or for any loss or damage suffered.

What accounts for Ethereum’s rise? Without a doubt, its success in moving from a simple speculative asset to its true calling, a high-utility asset with commensurate adoption.

Let’s kick off this communication with some big news – another one – for the Rivemont Crypto Fund. After announcing on Monday that the Fund was now available for distribution through the advisors of the financial services firm MICA, we can now confirm that after several years of work towards this goal, we have obtained the authorization to trade a multitude of additional cryptocurrencies. Indeed, all tokens available for custody and trading with our partners, as long as they fit the mission of the Fund following a favorable internal due diligence, can now be held in the Fund. This gives us access to over 50 potential cryptocurrencies.