Inflation was once again the main factor impacting the markets this week. U.S. Consumer Price Index data jumped 5.4% from a year ago, the largest increase since August 2008. The Core CPI, which excludes volatile food and energy components, climbed 4.5%. This is a threshold not seen since 1991.

The markets did not react too strongly to the worse-than-expected data, mainly because one-third of the increase came from a sudden jump in used car prices. Nevertheless, as the scenario continues to unfold, it is becoming clearer. The injections of liquidity to support the economy during the pandemic are creating a wave of inflation. It remains to be seen whether this will be temporary or whether we are witnessing the beginning of a real inflationary trend. 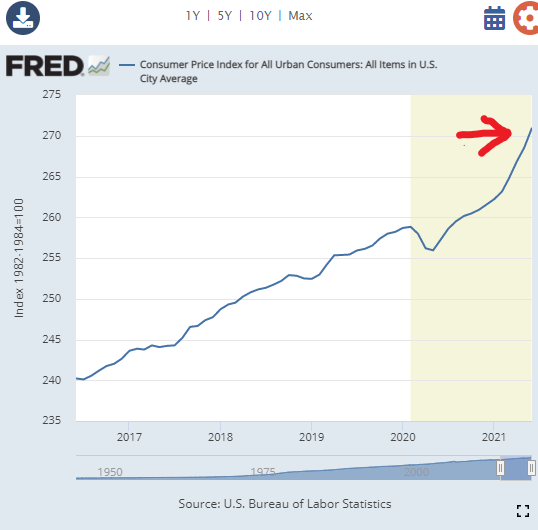 “The quantity of money has increased more than 32.9% since January 2020,” economist Peter Jacobsen explains. “That means nearly one-quarter of the money in circulation has been created since then. If more dollars chase the exact same goods, prices will rise.”

During the time that bitcoin has gone from an idea to its highs at $65,000/coin, the U.S. dollar has lost about 20% of its purchasing power. So here we are again, facing the same duality that we have often presented in this paper. Which facet of bitcoin will ultimately prove dominant in the face of inflationary times? Will it be its attributes as a deflationary asset that serves as a perfect hedge, similar to the one historically offered by gold? Or will bitcoin act more as a risky asset, being one of the first to be sold off when the economic earth begins to shake?

On the face of it, one cannot ignore the fact that it is the latter scenario, when announcing inflation data, which has so far prevailed. This is the logic where inflation equals future interest rate hikes, hence a closing of the new liquidity valves, hence less general investment. This trend is not specific to bitcoin. It affects the stock market in general. To be fair though, despite the point that bitcoin is in, it is still up 250% from last year. The decline is therefore not necessarily a direct result of inflation. Correlation does not mean causation. A simple cooldown following a period of exuberance is just as plausible.

While no one has an answer today as to how the value of bitcoin would translate in the face of a true inflationary crisis as many fear, we are certainly facing a key test for the asset. Will all of its theoretical attributes that make it the ideal safe haven translate into consistent adoption by the markets? This could be explosive, no pun intended.

We mentioned two weeks ago that the crypto.com exchange had just initialed a gigantic deal worth over $100M with Formula 1. The purse strings are clearly untied for the company, which is doing it again with a $175M sponsorship of the UFC for ten years. This is the largest partnership ever signed by the mixed martial arts company. The exchange also recently signed an agreement with the Montreal Canadiens.

Crypto.com will be the UFC’s first-ever global fight kit partner, which means its brand will appear on the uniform of every UFC fighter who steps into the octagon. “If we had talked a couple of years ago, crypto might not have been on the radar, but it’s sort of a sign of the times,” said UFC COO Lawrence Epstein, who declined to comment on the terms of the deal. “It’s new, but it’s moving quickly, and it’s very dynamic.”

One long-time advocate of bitcoin with obvious technological expertise is Apple co-founder Steve Wozniak. At a technology summit held on Mexican soil last week, he called the asset “the most incredible mathematical miracle.” He added that he believes bitcoin is more valuable than gold because gold is not scarce enough. “Gold is limited and you have to look for it; bitcoin is the most amazing mathematical miracle.”

After a few days of decline, bitcoin is rebounding encouragingly at the time of writing. It remains in a clear consolidation zone between $30,000 and $35,000. According to analysis firm Glassnode, we may be seeing the calm before the storm. “The [past] week opened at a high of $35,128, and traded down to a low of $32,227. It is starting to feel like the calm before the storm as muted and quiet activity appears across both spot, derivative, and on-chain metrics,” explains the most recent weekly report. Notably, a rebound in the hash rate pointed to the network and an outflow of bitcoins from exchanges to private wallets are highlighted.

In addition, there has been a decline in interest in the derivatives markets. BTC spot trading volumes are gradually reclaiming their role as the main driving force behind Bitcoin’s price movements instead of “short/long squeezes or leveraged liquidations,” Glassnode explained. Thus, the direction of Bitcoin’s next big move will likely be conditioned by underlying supply and demand rather than “a speculative premium/discount,” the researchers concluded.

Ecoinometrics shares this optimism, but for different reasons. They note that large wallets were clearly selling at the highs, but that they are resuming buying at the current level and especially near the strong support at $30,000. The following chart shows the number of addresses owning between 1,000 and 10,000 BTC: 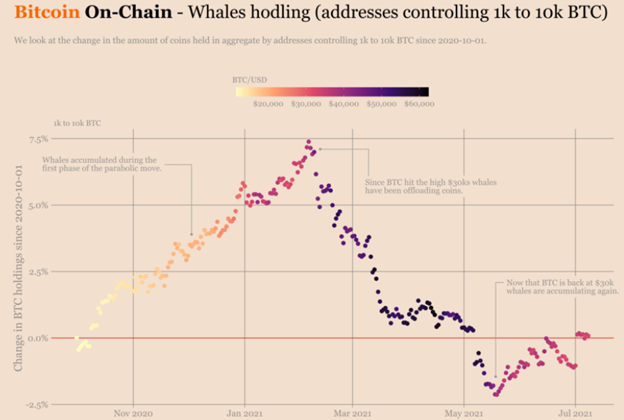 “Apparently $30k is a key level that stopped the trend of coins accumulation by whales,” Ecoinometrics commented. “Now that $30,000 has returned, cold feet are nowhere to be found — investors, both big and small, are buying again. Whales and small fish have started accumulating again while other categories have turned neutral,” the findings continue.

“If that interpretation is correct, then what we had with this correction is a reset. Would that trend of accumulation continue, there is only one direction Bitcoin can go and that’s up.”

Purely technically, we would have to close a day convincingly north of $35,500 to expect to see a real springboard for prices.

The presented information is as of July 14th, 2021, unless otherwise indicated and is provided for information purposes only. The information comes from sources that we believe are reliable, but not guaranteed. This statement does not provide financial, legal or tax advice. Rivemont Investments are not responsible for any errors or omissions in the information or for any loss or damage suffered.

The week that ended yesterday for the Rivemont Crypto Fund was one of timid recovery on the markets following the sudden drop on September 7th. The bullish technical picture remains intact, however, with a golden cross emerging today for bitcoin. While we’ll come back to what prices are telling us in the 2nd half of this letter as is the tradition, let’s first talk about the fundamental expression of the current cryptocurrency market. We sometimes stick our noses too close to the prices to see the giant steps the industry has taken. Let’s address them.

September 7th, 2021 was to be a historic day in the history of bitcoin. For the very first time in its short life, a country adopted it as legal tender. Against the opinion of the International Monetary Fund, as well as the majority of the population, El Salvador is now forcing all businesses to accept payments in Bitcoin. For many investors in the industry however, it was the sudden steep drop in prices, erasing the week’s gains in a matter of moments, which rather marked this historic day. Let’s take a look at these two central stories from Tuesday.