Death, taxes, and a tweet from Elon Musk that moves the markets. While bitcoin was in a real state of uncertainty as it tested major supports just yesterday, it only took a few words from the owner and founder of Tesla to send the price up several percentage points.  So what did Musk have to say about bitcoin this time? 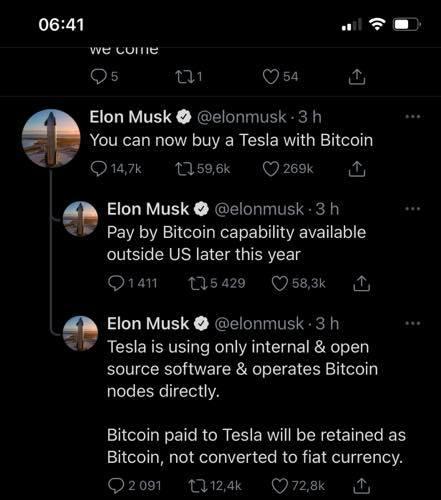 So it’s now official. Tesla is accepting bitcoin payments in the United States for the purchase of its vehicles. This acceptance will follow worldwide shortly. Perhaps most important is the vote of confidence that follows, as well as the company’s admitted involvement in the success of the mother of cryptocurrencies. Indeed, the company claims to operate nodes of the network and, above all, confirms that the bitcoins that will be obtained following car sales will be kept as is rather than converted into fiat currency. This is therefore not just a merchant seeking to increase its diversity of payment methods for the benefit of the buyer, but a real vote of confidence in the future of bitcoin vis-à-vis the financial health of the company.

The week was marked by the testimony of two leading heads of U.S. monetary policy before a Senate committee, Janet Yellen and Jerome Powell. While the primary theme was the impact of monetary stimulus on inflation, the topics of bitcoin and digital currencies was nevertheless addressed. While Powell’s position as Fed chairman will obviously never be pro-crypto, his speech was no less relevant.  Alluding to the active exploration of launching a digital U.S. dollar, the latter states that he believes that cryptocurrencies cannot remain entirely private forever. According to Powell, independent cryptos are “more of an asset for speculation, so they’re also not particularly in use as a means of payment. It’s more a speculative asset that’s essentially a substitute for gold, rather than for the dollar.”

An acknowledgement that bitcoin is similar to gold. While the whole thing is obvious to us, we nevertheless did not expect to hear it from Powell’s mouth!

Proof that the industry continues to grow rapidly, the English service Blockchain.com has just completed a capital raise of $300M. This latest round now brings the value of the firm at $5.2 billion. This is a significant increase from a valuation of $3 billion just a month ago. Blockchain.com plans to use the fresh funds to recruit more employees and support its institutional business. According to CEO Peter Smith: “The institutional side requires more capital. When you’re pitching asset managers they want to see a big balance sheet.”

The week also saw the replacement of the Turkish central bank chairman. President Erdogan and his new appointee share the preposterous idea that rising interest rates are what cause inflation, so they must be kept low at all costs. This political interference in economic policy had an immediate consequence, with the Turkish lira losing 15% of its value overnight. What has been happening systematically in the face of national currency crises in various countries in recent years? The answer is a sudden and increased rise in the value for bitcoin. It is only natural that people would want to protect their savings from centralized decisions over which they have no control. Once again, bitcoin is proving to be an excellent tool to regain such power.

The end of this week promises to be both interesting and important on the markets. Indeed, a record volume of futures contracts is set to expire this Friday. In that light, the bullish news of the day provides some comfort as such expirations in an uncertainty zone have often led to selling pressure. Nevertheless, open interest remains mostly long, a recurring proposition since the beginning of the year. Volatility could be on the rise in late March and early April as big players will need to position themselves in these derivatives markets.

On the encouraging side, there was an outgoing transfer of $806M worth of bitcoins from Coinbase Pro yesterday. While the reasons behind such a move are never certain, in the past they have often been the result of large institutional purchases moving their newly acquired bitcoins back into their custody wallets. In short, many speculate that we have seen another episode of large players taking advantage of a bitcoin correction to enter the market. As can be seen from the following chart, such transfers have often preceded a price spike: 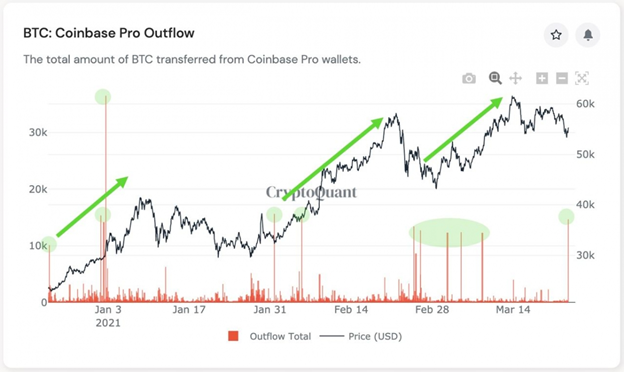 Let’s also share this interesting risk-reward ratio, a metric called “reserve risk,” which shows that buying bitcoin remains a profitable proposition. Bitcoin’s “reserve risk” metric measures the risk-reward ratio of investment based on long-term holders’ confidence relative to the price at any given point of time, and is currently seen at 0.008. That’s well short of highs above 0.02 seen during the bull market frenzies of December 2017, December 2013, and June 2011, according to blockchain analytics firm Glassnode. “The incentive for long-term holders to sell is still relatively low when compared to past bull markets,” Jeff Rose, founder and CEO of Vailshire Capital Management, tweeted Monday. “This metric suggests the current bull market still has a long way to run in terms of price increases.” 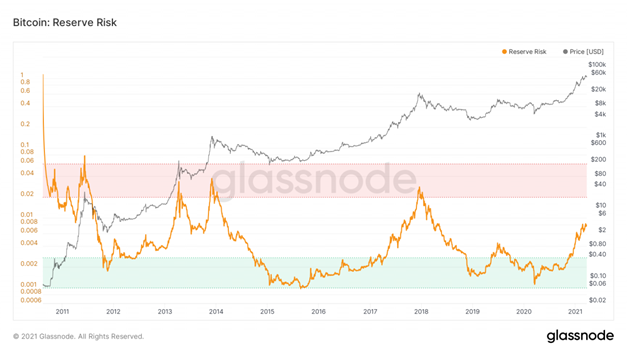 Let’s wrap up this weekly letter with this interesting piece (French only) from last weekend in La Presse. The author, Karim Benessaieh, was evaluating ways to own bitcoins without actually buying them. In short, he overviewed the current ways to get exposure to the performance of the cryptocurrency markets in the country without buying directly. Obviously, the Rivemont Crypto Fund is one of the current solutions and remains the only one for investors who want active management and exposure that can go beyond bitcoin alone. The President of the firm, Martin Lalonde, participated in the paper. You can read it here.

The presented information is as of March 24th, 2021, unless otherwise indicated and is provided for information purposes only. The information comes from sources that we believe are reliable, but not guaranteed. This statement does not provide financial, legal or tax advice. Rivemont Investments are not responsible for any errors or omissions in the information or for any loss or damage suffered.

We told you last week that we were in caution mode. This positioning has definitely been beneficial for the fund’s investors, who only suffered a part of this decline. Our positions in altcoins, which have long been a sizable portion of the fund, were also virtually non-existent throughout the last seven days.

“History has shown capital flows to where it is treated best and embracing innovation leads to more wealth and prosperity. We also think there is very high stakes game theory at play here, whereby if bitcoin adoption increases, the countries that secure some bitcoin today will be better off competitively than their peers. Therefore, even if other countries do not believe in the investment thesis or adoption of bitcoin, they will be forced to acquire some as a form of insurance.”