Rarely has a quarter ever been as enjoyable for Rivemont Investments as this one was. The primary objective of our overall strategy of technical analysis and trend-following is to ensure that investors avoid serious losses when markets are in sharp decline. While U.S. and Canadian markets experienced a disastrous third quarter with respective losses of 6.5% and 7.7%, none of our portfolios lost value during the same period. In addition, the Rivemont Absolute Return Fund, which has a mandate to generate positive returns in all market conditions, had an exceptional quarter with a return of 17%. Our conservative approach, which aims to reduce volatility, especially in difficult times, clearly delivered.

In this financial letter, I will begin with a more detailed review of our performance, with a particular focus on the specific transactions that allowed the fund to produce such strong results. Given the considerable influence the President of the Federal Reserve has on the markets at the moment, I will discuss the impact of the direction of interest rates on the performance of different asset classes. As usual, I will conclude with our outlook on the markets and the preferred securities in our portfolios. 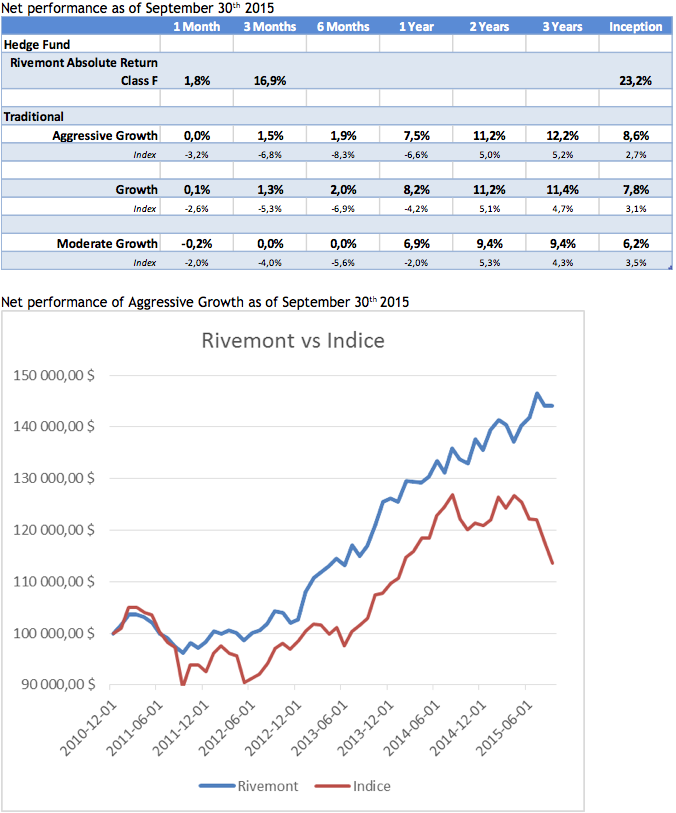 Rates of more than one year are annualized. The indices include the return of the S&P/TSX Capped Composite Index and the DEX Universe Bond Index in the following proportions: Aggressive Growth: 90% equities, 10% bonds; Growth: 75% equities, 25% bonds; and Moderate Growth: 60% equities, 40% bonds. The yield of Rivemont Investments is the average performance of all accounts of over $100,000 at the beginning of the year and under 100% discretionary management, including accounts that are no longer active. The net yield is calculated after all costs (management, custody and commissions) and using the ROR method. Past performance is no guarantee of future results.

The first factor: by June of this year, we had already reduced the equity weighting by about 10%. But on August 21, just before the plunge in the stock market, we sold the index portion from the equity category of our holdings, which resulted in an additional underweight of 10% to 20%. As a result, we did not suffer too much from the drop in stock prices. At the end of September, all portfolios had high liquidity. We only started to add stocks in October when the market seemed to regain a firmer footing. One of the stocks we added was Stewart Information Services, a financial intermediary working in the U.S. housing sector. This stock showed promising bullish momentum at the beginning of October when we added it to our portfolios. Moreover, we think it could become an attractive acquisition target for a major U.S. financial institution.

The second factor: when a stock goes from an uptrend to a downtrend, we will rarely wait on it. We usually opt to quickly eliminate it from our portfolios. As a result, only the hardiest stocks form the core of our portfolios. For this reason, we did not hold any securities linked to the oil sector, which experienced the biggest losses in the last quarter. In addition, we had a majority of U.S. equities which meant that with the significant drop in the Canadian dollar, even though the prices of these stocks declined, we still avoided painful losses.

We are also quite satisfied with our decision to avoid emerging markets, as they have collapsed even more dramatically than developed markets. The Chinese market suffered major losses even though it was soaring only a year ago. South American markets, and in particular the Brazilian market, also experienced an especially difficult quarter. In my view, government intervention, particularly in China, will have no effect in the short-term. What goes up too quickly will eventually come back down to its long-term growth rate. We missed the rapid rise of Asian stocks in 2014, but we also avoided the crash: Chinese Market 1 – Rivemont 1. 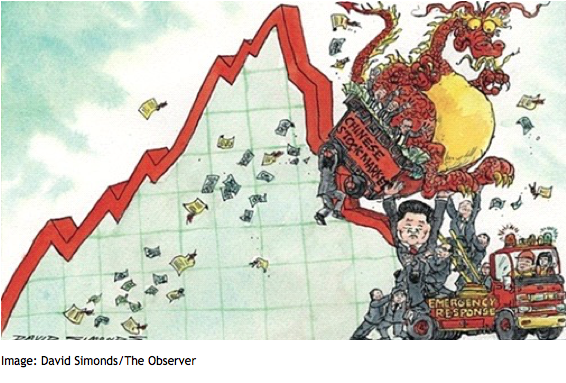 Third factor: The Rivemont Absolute Return Fund took advantage of the third quarter of 2015 to stand out from its peers and become the best performing fund in Canada across all categories according to the Globefund website (quarter ending September 30, 2015, excluding ETFs). 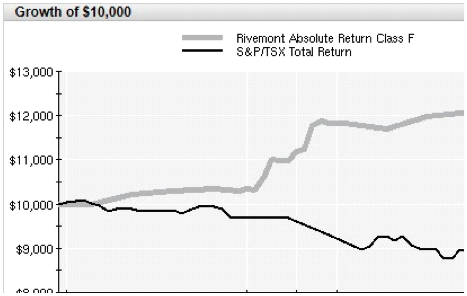 This fund, which aims to provide positive returns in all market conditions, achieved its goal while facing its first real storm in the last quarter. Over these three months, it yielded 17%! To achieve this feat, we focused on rapid market decline by short-selling in the weakest sectors of the fund to take advantage of declining prices. For example, we sold ICON for $24 and re-purchased it at $15, VIAB sold for $61 and was redeemed at $41 and SFM sold for $27 and was re-purchased for $21. Our strategy works in uptrends and downtrends. We recovered our outlays in early October when the markets began to recover. However, we are obviously prepared to make full use of short-selling if the markets lose foot once again. 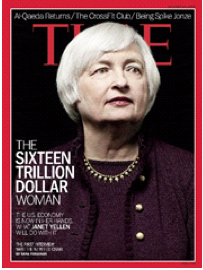 Recently named the most powerful woman in the financial world, Janet Yellen is Chair of the Board of Governors of the U.S. Federal Reserve (Fed) and head of the committee responsible for the monetary policy of the United States. This committee meets about eight times a year, and its primary responsibility is to set the short-term interest rate. It is extremely important since all other interest rates for things like car loans, mortgages or business loans, are set according to the short-term rate announced by the central bank. Thus, low interest rates encourage individuals to consume and companies to invest since access to capital is less expensive. Conversely, a rate on the rise will slow consumption and business investment. However, buoyant economic activity and low interest rates will have a perverse effect: a rise in inflation. The challenge for central banks is to find the balance point that will keep the inflation rate at around 2% while sustaining economic growth.

However, what interests us most is the impact of these rates on the financial assets in which we invest. We know, as I have already discussed at length in previous financial letters, that bond yields and interest rates have an inverse relationship. A rise in interest rates lowers the value of a bond. But what about the value of stocks? Is there really a link between the policy rate and stock returns? There is a well-known adage: “Don’t fight the Fed.” But is this assertion well-founded?

Johnson, Jensen and Garcia-Feijoo answered this question in their latest book Invest with the Fed, the first major study on the subject. And the answer could not be clearer.

As this table shows, markets yielded over 15% when rates were lowered, and only 6% when they rose. If we look more closely at the net return, we realize that it almost becomes zero in periods of monetary restraint and exceeds 12% in an expansionary period. As seen over the past 6 years, the rate cut really helped the markets reach new heights. Let’s look at how asset classes behave based on the movement of interest rates. 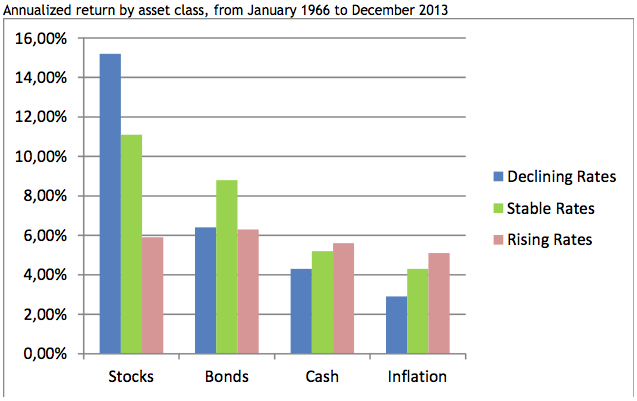 In times of rising interest rates, all classes are equivalent, resulting in yields of 5.6% to 6.3%. But in periods of decline, stocks stand out dramatically!

The authors went even further in their study by showing which classes of stocks perform better. Thus, in periods of falling interest rates, it is small cap companies and retail that are doing well. While in times of rising rates, the mining and energy sectors perform better.

Rest assured that we will be positioned advantageously for future interest rate moves by central banks, as the authors’ conclusions only confirm, in large part, what we already knew…

I would like to thank you for continuing to read my reports six years after our journey began. I continue to receive positive feedback about these financial newsletters and intend to continue publishing them for a long time to come. Please do not hesitate to contact me if you wish to discuss my articles in more detail. Discussing finance has always been a passion of mine.

I am also pleased to announce that the Class F Rivemont Absolute Return Fund has been nominated for the 2016 Hedge Fund Awards. This is a first for the firm, and one of which we are very proud. This is one of the joys of having fully aligned our interests with those of our customers. When you win, we also win, and vice versa!

The information presented is dated December 31, 2013, unless otherwise specified, and is for information purposes only. The information comes from sources that we deem reliable, but its accuracy is not guaranteed. This is not financial, legal or tax advice. Rivemont Investments is not responsible for errors or omissions with respect to this information or for any loss or damage suffered as a result of reading it.

BACK TO FINANCIAL LETTER
Partager