It was on the morning of September 19 that we made the important decision.

In the first two hours after Canadian markets opened, Rivemont Investments sold millions of dollars in shares. In the following days, other shares were sold. As a result, our portfolios held a very large portion of their assets in cash. At the same time, high-yield bonds were sold in exchange for Canadian government bonds, which are less risky. Finally, the Absolute Return Strategy, which relies heavily on a market decline, was able to acquire short positions in gold, oil and the high tech industry.

This is what we call active management. And it works. When the firm was first established almost 5 years ago, I wrote on the website (you can still find it there): ‟One of the great advantages of this technique is that it can be heavily underweighted in equities and bonds when markets drop or crash, which can prevent significant losses on the part of investors.ˮ

As I write this letter, the S&P/TSX dropped from 15,685 to 14,527, a decrease of over 7 per cent, and there is no evidence that the decline is over. Bear markets are healthy and normal, and should be considered in developing an investment strategy. Without volatility, stocks do not offer the enviable historic yield of nearly 10 per cent gross per year. If there is a relationship that is immutable, it is that which exists between risk and return. Another profitable aspect of bear markets is the ability to purchase assets at a lower-cost, making them even more attractive because of their improved future earnings prospects. But to enjoy it, you must have cash. Indeed, we need ammunition that we can use when the time comes. The wise Warren Buffett maintains a huge pool of liquidity to be able to take advantage of opportunities that arise. And we now find ourselves in the same enviable position.

This quarterly newsletter is quite different from previous ones. I took the liberty to explain my investment philosophy in more detail with a brief overview of my background and a quick look at the people who have influenced me most in terms of investment. I am fortunate to have one of the finest libraries in the region dedicated to finance. Those who enjoy reading will find many good suggestions in this newsletter. I will conclude, as usual, with our outlook on the markets and our most important positions.

In this graph of the Canadian equity S&P/TSX index, the yellow arrow indicates the time of the sale of our shares. 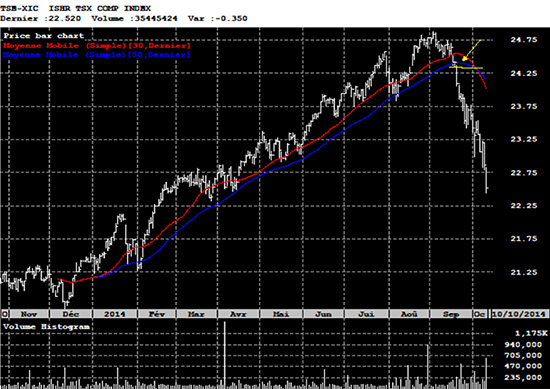 I began my investment career in March 2000. Some of you may remember the carnage in markets that followed the bursting of the technology stock bubble in the 1990s. Luckily for me — and for you — the first book I read on trading was called Secrets for Profiting in Bull and Bear Markets by Stan Weinstein. How about that hair? 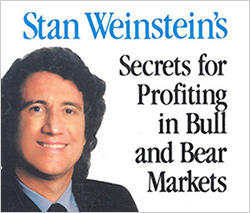 From the start, I was fundamentally indifferent to the direction of equity markets. By using short sales, I knew I could get out of the game regardless of the tendency of individual securities. Only a few of us actually made money between 2000 and 2002. The other major thing I took from this book is the sectorial technical analysis, which is really the basis of our strategy at Rivemont Investments. We use a top-down approach that includes the following considerations:

What is especially interesting about this analysis is that a bull or bear market will always be supported by a particular sector, and it is in this area that the best opportunities will arise. However, most bull markets that succeed are usually supported by new and different sectors.

History Repeats Itself Over and Over 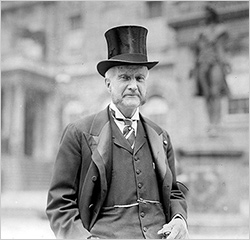 Henry Clews was born in 1936 in England and immigrated to the United States in 1850. At the age of 23, he co-founded Livermore, Clews, and Company, which was the second largest bank in charge of distribution of federal bonds during the American Civil War. He later served as an economic consultant under President Ulysses Grant. I think his greatest legacy is his book Fifty Years in Wall Street, published in 1908. Between the autobiography and the opinion piece, this book tells the captivating story of the daily life of investors during the second half of the nineteenth century.

After reading this book, one quickly realizes that the stock market was somewhat more volatile at this time. The author advised to wait for a market decline of 10 per cent over five days — which caused panic and happened quite frequently — and buy at that moment. However, what personally struck me the most was that, despite the Civil War and many dramatic market collapses, which resulted in the bankruptcy of several banks, stock markets have consistently been the most effective vehicle for wealth creation. This was truer in the nineteenth century than in the twentieth century, which is particularly surprising (Bernstein based on Siegel, 2002).

The Greatest of the Greats

Also known as the bible of ‟trading”,Reminiscences of a Stock Operator by Edwin Lefèvre tells the story of Jesse Livermore, possibly the most famous trader in the early twentieth century. His claim to fame is that he made a fortune during the great panics of 1907 and 1929. You will be hard-pressed to find a successful trader who has not read Reminiscences of a Stock Operator more than once. The book also recounts Livermore’s tragic story which ends with him committing suicide, penniless, in 1940. 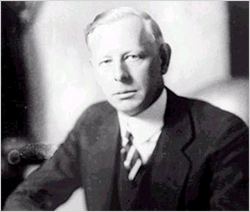 By shorting the markets in 1907, he amassed a fortune of $3 million. He subsequently went bankrupt. But he got back on his feet and amassed a staggering $100 million dollars by 1930! He owned several castles and a private yacht for his travels in Europe. Livermore always said that his stock woes were born of his inability to follow his own rules. Occasionally, the best thing to do is to do nothing and just let the trend run its course. Here are some of Livermore’s tips that I think are wise to apply:

We also have a series of strict and clear rules that greatly facilitate our decision-making process. I remember one day when I was traveling with my family and I was in the office area of our hotel room, concentrated on a chart. My eldest daughter asked me what I was doing. I told her that the price of a stock had reached a line that I had drawn on the chart, and my plan was to make a transaction if the price ever reached that line. She looked me in the eye and said, ‟If that’s the plan, then follow the plan.” A successful transaction is always well-planned and well-executed. Usually all you need to do is follow the plan! 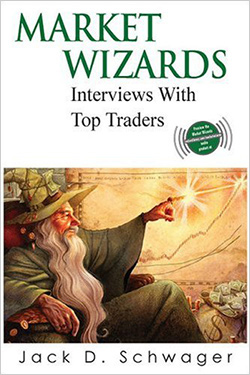 Few books have had as much of an impact on my generation as Market Wizards: Interview with Top Traders by Jack D. Schwager, published in 1989. It was in reading this book that I realized that it was possible for me to succeed as a trader. This book is simply the transcript of a series of meetings that Mr. Schwager had with those he described as the best investors in the United States. It is inspiring, of course… Each of these successful investors gives his best advice while presenting his fascinating history of market success. And one piece of advice that comes up time and again is to cut losses quickly.

The term ‟cut losses” means that in the event that, after buying a security, it does not perform as planned, and in particular if the price drops, it should be sold immediately and replaced with a better-performing security. This approach avoids the significant losses that are the most damaging to a portfolio. You will never see a security that is at -25 per cent or -40 per cent in our strategies.

As a result, in 2014, we held some securities for a very brief time, such as Bed, Bath and Beyond (BBBY) and Monsanto (MON). These shares currently trade at a lower price than the price at which we sold them. Often a loss is not a bad transaction, but a good one…

What has impressed me most in Schwager’s book is that all of these multimillionaires started their careers early and enriched their investors exponentially. This continues to be Rivemont Investments’ objective. And we are on the right track.

To give you an idea of what we mean, Soros and Templeton started with less than $10 million under management and stayed at that level for several years. The assets that were invested with Rivemont Investments’ in our first year are now worth ten times as much as their original value. We hope to follow in the footsteps of these great managers.

Finally, note that many of the managers interviewed in Market Wizards advocate technical analysis and trend following. Others instead rely on fundamental analysis. The important thing is to apply a method with which the investor is comfortable and one that works, of course.

You will find below a list of the seven individual securities with the largest weight in our “growth” portfolio. These stocks were selected based on their respective potential to outperform the stock market. You will find a short description of their activities, the annual dividend, if any, and the total return since their first inclusion in our portfolio.

The last five years have been quite easy for investors. The American market was up year-after-year and only specific sectors, such as precious metals, experienced real difficulties. The next year will be, I think, somewhat different in that the ability to choose the strongest companies will be paramount. It is in this light that I am particularly proud of the launch, in January 2015, of the Rivemont Absolute Return Fund. The integration of this investment vehicle will reduce the downside risk of portfolios under our management. Posting positive returns in October, this strategy will continue to be particularly valuable when markets are not performing as well.

The information presented is dated September 30, 2014, unless otherwise specified, and is for information purposes only. The information comes from sources that we deem reliable, but its accuracy is not guaranteed. This is not financial, legal or tax advice. Rivemont Investments is not responsible for errors or omissions with respect to this information or for any loss or damage suffered as a result of reading it.