I would like to begin the newsletter with this guiding principle: investing is an exercise in probability. After extensive research, we select securities that are most likely to perform well and then wait to see if our predictions were successful. Unlike in other fields of expertise, it is easy to evaluate our performance. And much like at school, after each quarter we can compare our performance with the market and accurately calculate the added value of the services we provide.

For the first quarter of 2013, we were right often and significantly. Indeed, our portfolios have largely outperformed their benchmark. For example, while S&P/TSX equity and bond markets remained relatively stable, our portfolios have produced returns between 6% and 9%, based on the profiles of our investors. As a result, all accounts under our management are at their highest levels ever.

In this newsletter, I will begin by discussing the first quarter results and explaining why we performed so well. I will then offer my opinion on two aspects of investment about which I am often asked: the link between employment and equity returns; and price indices, which according to some, are currently quite high. As usual, I will conclude by presenting our perspectives on markets and securities in our portfolios.

Rates for more than one year are annualized. The indices are based on the performance of XIC ‐ S&P/TSX Capped Composite Index Fund and XBB ‐ DEX Universe Bond Index Funds in the following proportions: Aggressive Growth (90% equities, 10% bonds); Growth (75% equities, 25% bonds); and Moderate Growth (60% equities, 40% bonds). The yield is calculated net after all costs (management, custody and commissions). Past performance is no guarantee of future results.

Again, our performance was due to the decision to reduce our exposure to the Canadian market and promote market specific countries, including the United States and the Philippines. In my last column in La Presse, I clearly indicated that exposure to natural resources in the Canadian market was a high risk and that a decline in gold prices was possible and even probable. This fear was well founded since between January 1 and April 12, gold plummeted by 12%, and nearly half of this loss occurred in one single day: April 11. As April is part of the second quarter, you can see how the results for this period have also started off on the right foot.

The Philippines market continued to fire on all cylinders increasing by 19% between January and April. Given that these gains are better than expected, we decided to close this very profitable position. Regarding individual securities, our best performers were Packaging Corporation of America (PKG.N) with a gain of 17.5%, Jean‐Coutu (PJC‐A.T) with a gain of 9.5% and Chemtrade Logistics (CHE‐ UN.T) with a gain of 10.5%.

No link between the rate of unemployment and market returns.

For the past five years, economic newsletters and other media reports have continually stated that the economy is doing poorly and they explain the reasons for this gloom. As a professional investor, I obviously have to be aware of economic news, especially since my clients regularly ask my opinion on various news stories, including the tax wall or the recent Cypriot banking crisis. Fortunately, while this news may be interesting or entertaining, it does not really have an impact on the performance of equity markets, despite what many would have you believe. Indeed, and this is the most obvious evidence of this fact, global markets have been rising continuously for four years now.

In the same vein, I’d like to talk today about the myth of the labor market. Each month, one of the most anticipated economic data is that of U.S. employment. Upon the announcement of this figure, all the major financial institutions are going to present their respective interpretations and they often contradict each other.

Similarly, the major economic reports attempt to make the link between this data and the stock market, as if they were closely related. In reality, there is no link between the two!

Yet the myth persists because it is based on belief. It is easy to believe that, when there are more people working on the job market, these people spend more, which leads to higher profits for companies increasing the value of their shares. Contrarily, when the rate of unemployment is high, people spend less, which hurts the economy and causes share prices to fall. Few would argue against this hypothesis. And yet, those who argue against this theory are correct, and the data to prove it is easily accessible and verifiable1.

For example, in 2009, the unemployment rate in the U.S. increased over the course of the year to over 10%. What did stocks do? They increased by 27%! What does this tell us? The stock market is a leading indicator, and the labor market is a lagging indicator. In fact, they are so distant from each other in the economic cycle historically that high unemployment rate is usually beneficial for the financial markets, despite what pseudo‐ experts say.

The vertiginous rise is simply due to the multiplier effect of very long-term performance.

A month does not go by without someone asking me: Do you think there will be a market correction? Should I withdraw my profits now that the value of my portfolio has increased significantly? Is this the right time to adopt a defensive position?

The answer is that the human brain has what is called cognitive biases that are deeply rooted and greatly influence our behavior. One such bias is the fear of heights, hence the famous phrase “what goes up must come down”. Thus, for some investors, the following chart is terrifying, especially because of the astronomical rise in stock prices during the 1990s. 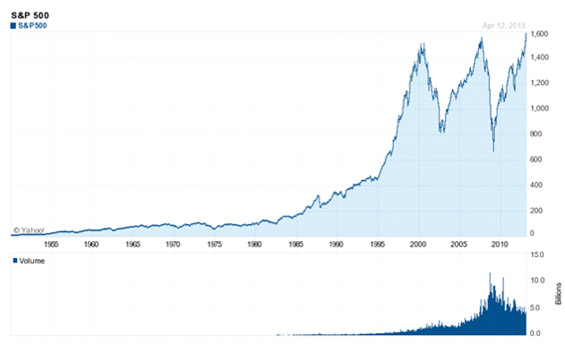 The vertiginous rise is simply due to the multiplier effect of very long‐term performance. Thus the effect of an increase or a sharp decline seems more significant if it took place five years ago, rather than 40 years ago. In this graph, the collapse (or crash) that occurred in 1987, 25 years ago, seems never to have existed, while the steady increase since 2009 seems untenable.

However, look at the same data in logarithmic mode. 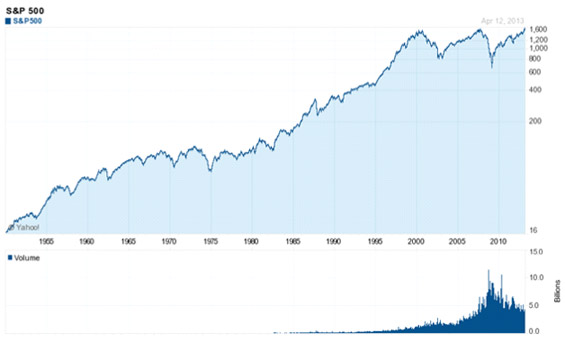 From this point of view, which is the one that should be used to analyze the stock price history, the rise seems more controlled and persistent and ultimately, less terrifying. Most importantly, the future looks much brighter. Over long periods, the performance of the stock market is much more stable than one might think.

I cannot end this letter without thanking the many clients of our firm who continue to recommend our services to family, friends and business relations. Assets under management have increased by 20% in the first quarter of 2013 alone, which is quite significant.

For those who would like to learn more about the long‐term performance of the equity markets, I recommend two best‐selling books written by Jeremy Siegel: Stocks for the Long Run; and The Future for Investors. These books (particularly the first one) explain in clear and concrete terms why the stock market has historically been the best way to grow savings.

The information presented is dated March 31, 2013, unless otherwise specified, and is for information purposes only. The information comes from sources that we deem reliable, but its accuracy is not guaranteed. This is not financial, legal or tax advice. Rivemont Investments is not responsible for errors or omissions with respect to this information or for any loss or damage suffered as a result of reading it.