For Rivemont Investments, now established in Ottawa for over three years, 2012 was not an ordinary year. In addition to moving into new more suitable premises, we doubled the assets under our management. We would like to once again thank our loyal customers who have renewed their confidence in us year after year. This loyalty is based on a solid foundation. Rivemont Investments continues to deliver. Portfolios with at least two years of calculated yields have surpassed benchmarks. For example, $100,000 invested in a growth portfolio on January 1, 2010, is now worth $102,741, compared to $99,640 for the average performance of our competitors, a difference of more than $3,000. I will provide further details about performance by type of portfolio in a later section of this financial letter.

The first part of the letter will provide a retrospective of last year’s markets. Next, you will find a review of our performance for 2012 followed by an overview of our investment thesis about the Filipino markets. I will then present our prospects for 2013 and finish with the usual presentation of the main securities comprising our portfolios.

The sovereign debt crisis did not spread.

For global markets, 2012 started as 2011 ended, with widespread concern in relation to European sovereign debt. Fortunately, the crisis did not spread and it is now seen as an aftereffect of the prolonged global banking crisis of 2008-2009. The graph below shows the index of financial stress in the euro zone that has returned to pre-Greek-crisis levels. 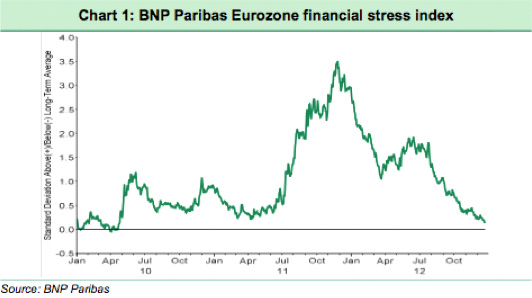 Closer to home, the American media were a source of great concern for many of our investors. Whether it was fear around the level of debt, the reelection of President Obama or the now famous fiscal cliff, all were good reasons to scare investors. But markets, as expected, ignored these exaggerated fears and the U.S. market (S&P 500) closed up 13.4% and the Canadian market by 4.0%.

In the Canadian market, two of the three major sectors ended lower: resources (-6.9%) and energy (-3.65%). The third largest sector, finance, ended with a gain of 12.8%, a significant increase. The following tables show the 2012 figures. 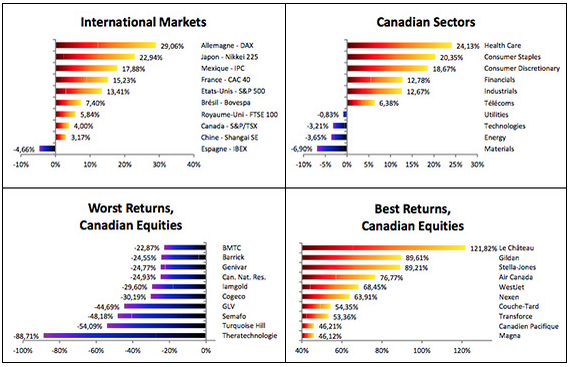 We did manage to avoid the downsides of oil and precious metals.

As I explained in a previous financial letter, there are three primary ways to modify a portfolio relative to its benchmark: change the weighting of asset classes; change the selection of securities within the asset classes; and diversify geographically. Here is how our portfolios were positioned in 2012.

None of our securities ended up ranking among the best or among the worst. We did not stand out in the selection of securities, which is usually our firm’s strength. What is also frustrating is the fact that we sold several stocks that ended-up performing very well in 2012, such as Metro, Dollarama and Saputo. In retrospect, we conducted our sector rotation a little too early.

We did manage to avoid the downsides of oil and precious metals for much of 2012, thus protecting us from certain losses.

We are pleased to have invested more in the U.S. market, which, as mentioned earlier, outperformed the Canadian market by nearly 10% in 2012. We broke new ground by undertaking a major diversification into emerging markets with a new position in the Filipino stock market which will be outlined in a later part of the newsletter.

The Growth Index: the average return of Canadian equity (75 %) and fixed income (25 %) indexes

This is the first time we publish results for our “Absolute Return” and “Lon/Can ” styles, and we are particularly pleased with the yields they obtained in 2012. These are two speculative management styles from the sub-group “Style Hedge Funds.” “Absolute Return” means that we use both long and short (selling) and the goal is to generate positive returns whether the market is up or down. “Long / Can” is the same style of directional strategy as “Absolute Return” but without short selling.

Performance is calculated net after all costs (management, custody and commissions). 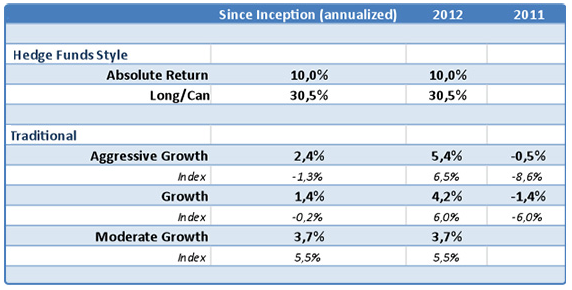 An investment thesis is the process of analysis that begins after the portfolio manager has had an idea or made a finding, which will usually lead to a corresponding position on the market. For the first time since the beginning of this financial newsletter, I decided to present an investment thesis to you, namely one associated with the purchase of EPHE (Index of the Filipino stock market) on the NYSE. Obviously, this process does not apply when only technical analysis dictates the purchase of a position, which also happens frequently.

One of our concerns about the future performance of the Western markets is the aging population and the impact of this on future stock returns. This fear is partly inspired by the study of the Japanese equity market, which has been in constant decline for the past thirty years. One of the causes of this decline is, I believe, directly related to the lack of growth in economic activity caused by the stagnation in the number of workers, and thus reduced opportunities for wealth creation for companies. Another region facing this kind of challenge is Western Europe, including France and Italy. And as the events of recent years have shown, there is cause for concern. The chart below outlines the performance of the French market (CAC40) since 1979. It underperformed significantly when compared to the Canadian and U.S. markets, both of which have reached or surpassed year 2000 levels. 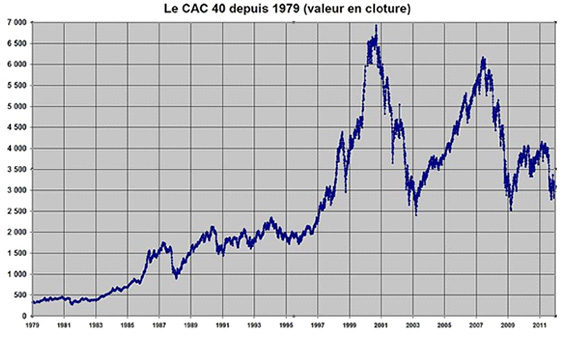 If one accepts the link between aging and slowing markets, we also accept the possible correlation between the increase in the number of active workers in society and growing wealth. The challenge is to find out which markets are most interesting in this regard. Two regions of the world emerge from the lot when studied from this angle: Africa and South Asia East. And since African markets pose much higher systemic risks than we are willing to accept, Southeast Asia is most attractive. It is also important to confirm our analysis based on external research. In the following table, the Conference Board has projected growth for each region of the world in basic scenarios, the first is optimistic and the second is more pessimistic. 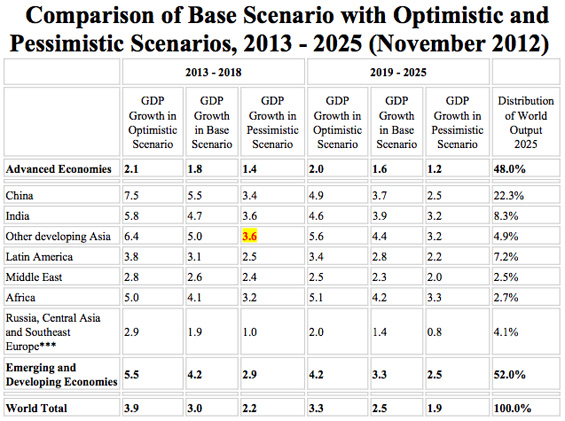 Thus, in a worst-case scenario, Southeast Asia should still experience the fastest growth in the world. This provides solid support to our thesis. The next step is to choose the investment vehicle and the target country. Countries under consideration are: Indonesia, Malaysia, Thailand, Singapore and the Republic of the Philippines. All of these countries have an exchange-traded fund indexing their respective stock markets and listed on the NYSE. We recommended Thailand in a recent article in La Presse, and it remains a great choice. By combining technical analysis, we decided to choose the country with the greatest relative strength, which turned out to be the Philippines, and purchased EPHE at an average price of 33.45 USD. That represents a weighting of 7% of our portfolios as of November 2012 (January 25, 2013 closing price: 36.46 USD).

By the time you read this newsletter, I will likely be in San Diego where I hope to improve my knowledge and expertise, along with hundreds of other portfolio managers from across North America. In addition, I just received the CFA Institute certificate attesting to five years of training recognized by the body. In an ever-changing financial world, it is important to stay current, either technologically or conceptually. You must insist that your financial advisor have knowledge of all aspects of the investment process. Be assured that, in this respect, Rivemont Investments strives to exceed the expectations of its customers.

Do not hesitate to make an appointment with us so that we can offer you interesting options especially for efficient management of your financial assets.

The information presented is dated December 31, 2012, unless otherwise specified, and is for information purposes only. The information comes from sources that we deem reliable, but its accuracy is not guaranteed. This is not financial, legal or tax advice. Rivemont Investments is not responsible for errors or omissions with respect to this information or for any loss or damage suffered as a result of reading it.